The "March of the Volunteers" 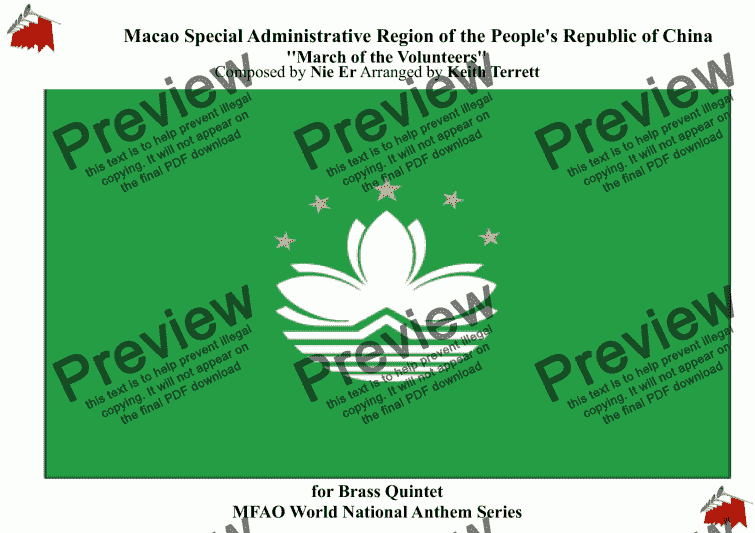 Arranged for Brass Quintet, The "March of the Volunteers" is the national anthem of the People's Republic of China, including its special administrative regions of Hong Kong and Macau. Unlike most previous Chinese anthems, it is written entirely in the vernacular, rather than in Classical Chinese.

Its lyrics were composed as a dramatic poem by the poet and playwright, the Japan-educated Tian Han in 1934 and set to music by Nie Er from Yunnan Province the next year for the film Children of Troubled Times. It was adopted as the PRC's provisional anthem in 1949 in place of the "Three Principles of the People" of the Republic of China and the Communist "Internationale". When Tian Han was imprisoned during the Cultural Revolution in the 1960s, the march was briefly and unofficially replaced by "The East Is Red", then played without words, then played with altered words. Restored to its original version, the "March of the Volunteers" was raised to official status in 1982, adopted by Hong Kong and Macau upon their restorations to China in 1997 and 1999, respectively, and included in the Chinese Constitution's Article 136 in 2004. Macao officially the Macao Special Administrative Region of the People's Republic of China, is an autonomous territory on the western side of the Pearl River estuary in East Asia. Macau is bordered by the city of Zhuhai in mainland China to the north and the Pearl River Delta to the east and south. Hong Kong lies about 64 kilometres (40 mi) to its east across the Delta.[5] With a population of 650,900[3] living in an area of 30.5 km2 (11.8 sq mi), it is the most densely populated region in the world. A former Portuguese colony, it was returned to Chinese sovereignty on 20 December 1999.

Macau was administered by the Portuguese Empire and its inheritor states from the mid-16th century until late 1999, when it constituted the last remaining European colony in Asia.[6][7] Portuguese traders first settled in Macau in the 1550s. In 1557, Macau was leased to Portugal from Ming China as a trading port. The Portuguese Empire administered the city under Chinese authority and sovereignty until 1887, when Macau became a colony through an agreement forced by Portugal after instability in China. Sovereignty over Macau was transferred back to China on 20 December 1999. The Joint Declaration on the Question of Macau and Macau Basic Law stipulate that Macau operate with a high degree of autonomy until at least 2049, fifty years after the transfer

Under the policy of "one country, two systems", the Central People's Government of the People's Republic of China is responsible for military defense and foreign affairs while Macau maintains its own legal system, public security force, monetary system, customs policy and immigration policy. Macau participates in international organizations and events that do not require members to possess national sovereignty.

Macau is a resort city in Southern China, known for its casinos and luxury hotels. Its gaming revenue has been the world's largest since 2006, with the economy heavily dependent on gaming and tourism. According to The World Factbook, Macau has the fourth highest life expectancy in the world. Moreover, it has a very high Human Development Index, ranking 17th in the world as of 2016. Macau is among the world's richest regions and its GDP per capita by purchasing power parity was higher than that of any country in the world, according to the World Bank.

It is known as the pre-eminent gambling (or gaming) capital of the world, dwarfing other gambling centers. 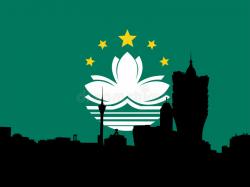