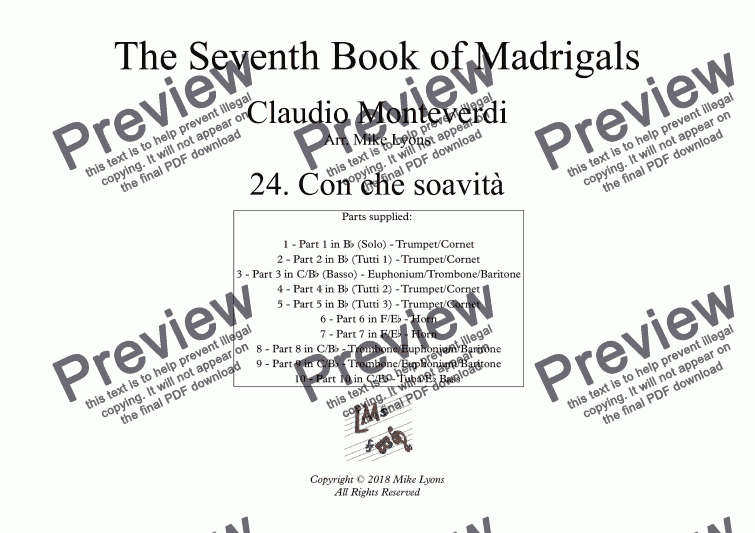 Price:
(+ VAT when applicable. Price is for score onlyPrice is for score and complete set of 16 parts)
Note: The publisher requires a minimum purchase of 1 licenses
Change currency...
You are purchasing high quality sheet music PDF files suitable for printing. You are purchasing a this music. Be sure to purchase the number of copies that you require, as the number of prints allowed is restricted.

At long last I have nearly finished the 7th book. This book has posed some issues as it is such complex music it is almost impossible to cut it down to 5 parts while maintaining its integrity. As a result, some songs will be in 6 or more parts.

This is the largest song so far. It is very complex and was originally composed as a Soprano solo with a 9-part 'orchestra' split into three unequally sized 'choirs'. Choir 1 consisted of two cittarones (a kind of theorbo or archlute), a clavicembalo (early harpsichord) and a spinet.

As you might imagine, this was well nigh impossible to reduce to 5 players, so I have transcribed it for 9 brass instruments, more or less keeping to the original 'choir' groupings with a trumpet/cornet solo line. This is also one of the longest songs so far.

I hope you enjoy the result.

The text translates as: How softly, scented lips, I kiss you or listen to you. The poet is describing his inability to both kiss and hear his beloved's voice at the same time.

The following parts are supplied:

The seventh book is quite a change from the earlier ones. Monteverdi seems to be concentrating on developing solos and duets, trios and small accompanied ensembles. The accompaniments are often written out with more than just long note chords. The intricate instrumental parts are more than just filling in the harmony (hence the difficulty in paring them down.)

Once again, these songs are exquisitely crafted and travel well onto brass.