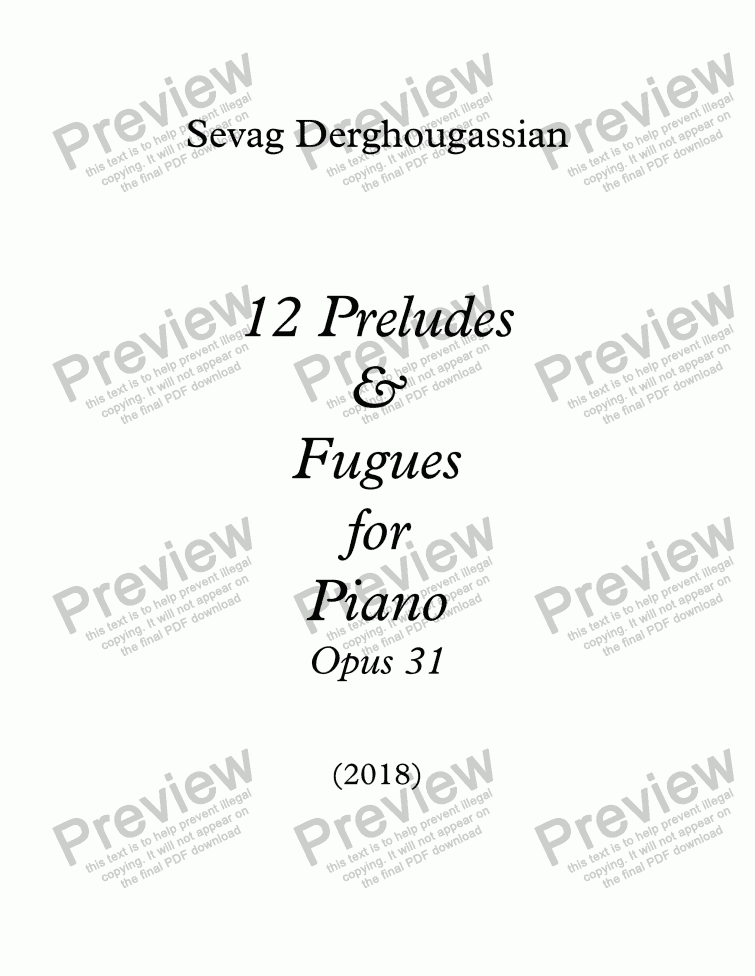 .Variant Cover images are by the composer (Ex. #17)

Similar to Bach, these are sets of music for piano, each with one prelude and one fugue. However, my preludes & fugues are not based on all of the tonalities consecutively, but rather randomly. The preludes do not introduce the tonality of fugues - some are contemporary atonal preludes followed by tonal fugues (some fugues, though, could have even corrupted tonalities - as I want to put it), thus creating contrast between them. The preludes, however, could have short elements of the subsequent fugues that indicate the subject. Also, these preludes and fugues are designed in a way that should be played as a cycle. The elements of this album are all collections of my previous two decades of elements along with new elements. The elements include harmonic language, drama, national identity, individual identity, bridges, codes, mathematics, and geometric shapes such as triangles and stars. My 24 preludes and fugues form an image of a 24-year-old person from war-torn lands. Most of my music includes this imaginary person in them - homeless, poor, unwanted, unloved, alone, with old clothes, etc. I always use this person in most of my compositions. Each is an event, not necessarily real, but a collection. Through them, I wanted to relay a message that makes a difference in our precious and fragile lives – a life that we hardly value, as soldiers go to wars, stay at the front lines and are totally inspired by some ideologies such that death itself becomes last option. The imaginary person is a land, is a home, is a woman, is a man, is a forest, is ice, is pretty, is ugly, is slim, is fat, is rich, is poor, is a species, is alien, is the earth itself, is the universe, is desert, is mountain, is ocean… all alone, a star in the dark universe.

In order to submit this score to ScoreExchange.com Sevag Derghougassian has declared that they own the copyright to this work in its entirety or that they have been granted permission from the copyright holder to use their work. If you believe that this score should be not available here because it infringes your or someone elses copyright, please report this score using the copyright abuse form.