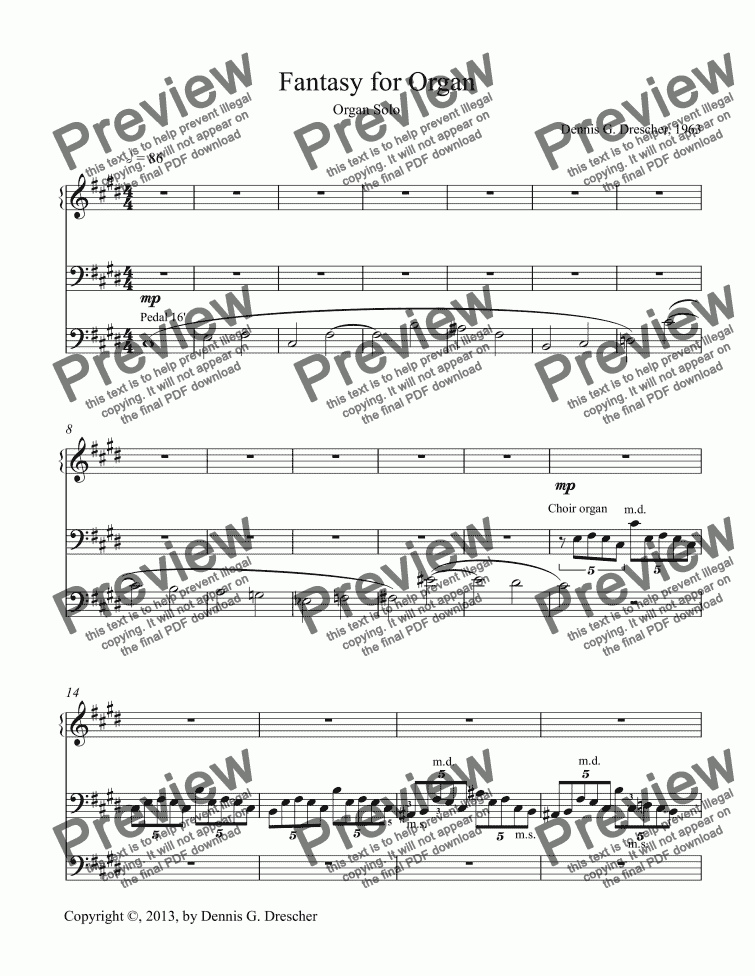 The Fantasy for Organ is based on a programme – the transition of autumn into winter. This composition centers around the key of C-sharp minor. The work begins with a 21-note theme played softly in the pedal, a theme which forms the basis for the entire piece. There follows a development in continuous quintuplet-note figures. The quintuplets are meant to suggest images of falling leaves swirling in the wind. The music unfolds with a sequential selection of the notes of the 21-note theme, shifting frames forward until all of the notes have been utilized. The first part ends with a pronounced restatement of the 21-note theme in the pedal, fading down to a short caesura before the second theme enters. The second theme, in contrast, is quiet, in stream-harmonies of triads. It is meant to evoke images of blue sky, still air, and sunlight streaming through colored leaves. The work next leads to a beating pedal base, then a re-entrance of the quintuplets in the minor mode, suggesting the development of a chill in the air. The latter passage leads to thin, major-mode quintuplets in the treble only, suggesting falling of the first snowflakes. There follows an increasing intensity of the snowflake figures, leading to a treble trill in the manual and the entrance of the 21-note theme in the pedal, developing into a fugal progression. The fugue proceeds with increasingly dissonant focus, suggesting a developing storm of snow, giving way to the main development section. The main section consists of quintuplets, presented in louder notes from the organ and a pronounced, double-pedal counterpoint. This section suggests a snowstorm. Then, quintuplet passages open into the original 21-note theme in the treble, in triadic streams, followed by a fugal progression of the theme leading to a caesura. The second theme quietly enters again, but increases in intensity, giving way to a re-entrance of the quintuplet figures in full-organ register with an extended scale figure in the bass. The figure is repeated in mirror counterpoint with double-pedal notes. The composition ends in the minor mode, with three punctuated chords, implying a final end to autumn.

In order to submit this score to ScoreExchange.com Dennis Drescher has declared that they own the copyright to this work in its entirety or that they have been granted permission from the copyright holder to use their work. If you believe that this score should be not available here because it infringes your or someone elses copyright, please report this score using the copyright abuse form.

Reviews of Fantasy for Organ