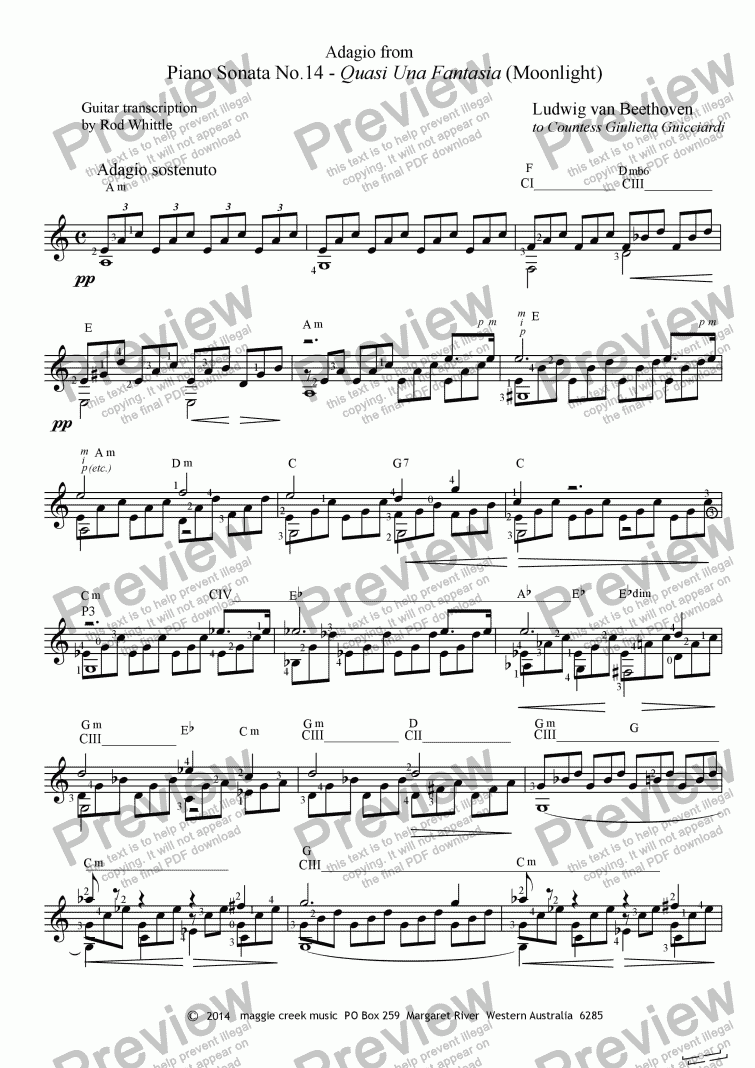 Beethoven's Piano Sonata No. 14 in C-sharp minor ''Quasi una fantasia'', popularly known as the Moonlight Sonata, was completed in 1801 (at the age of 31) and dedicated to his pupil, Countess Giuciella Guicciardi, whom he later confessed to have been in love with. (It is hard to conceive how she would have felt having something this beautiful dedicated to her.) Already struggling with deafness, Beethoven was yet to write his greatest works, which as you are no doubt aware, are among the most famous ever composed.

The Sonata is a beloved piece because of its haunting Adagio, with which it begins. This is directed to be played with sustained slowness and very quietly, becoming at the loudest mf or ''moderately loud''.

For guitar I have dropped the key to Am (which I notice other transcribers for guitar have also done: music is restrictive enough for that sort of coincidence to be expected) since this allows a liberal use of the open A and E strings (in the bass), particularly for the E which grounds the tense diminished scale passage before the recapitulation. It also (serendipitously) keeps most of the more difficult passages at the bottom end (the low fret range) which guitarists become familiar with first.

The piece has a signature rhythmic device which is first encountered at the end of bar five. Hard on the heels of the last note of the final triplet a sixteenth note sounds before a half note of the same pitch in the next bar. There is no dynamic change. How best to play it? I think, like everything involved in playing guitar, once you have basic techniques in place the best thing to do is what feels most natural and gives the sound most faithful to the score. In this case I play the last triplet note with the (right) thumb and the sixteenth note with the middle finger (medio), followed by the half note with the middle finger also (all of which I've marked), but another way may be preferred.