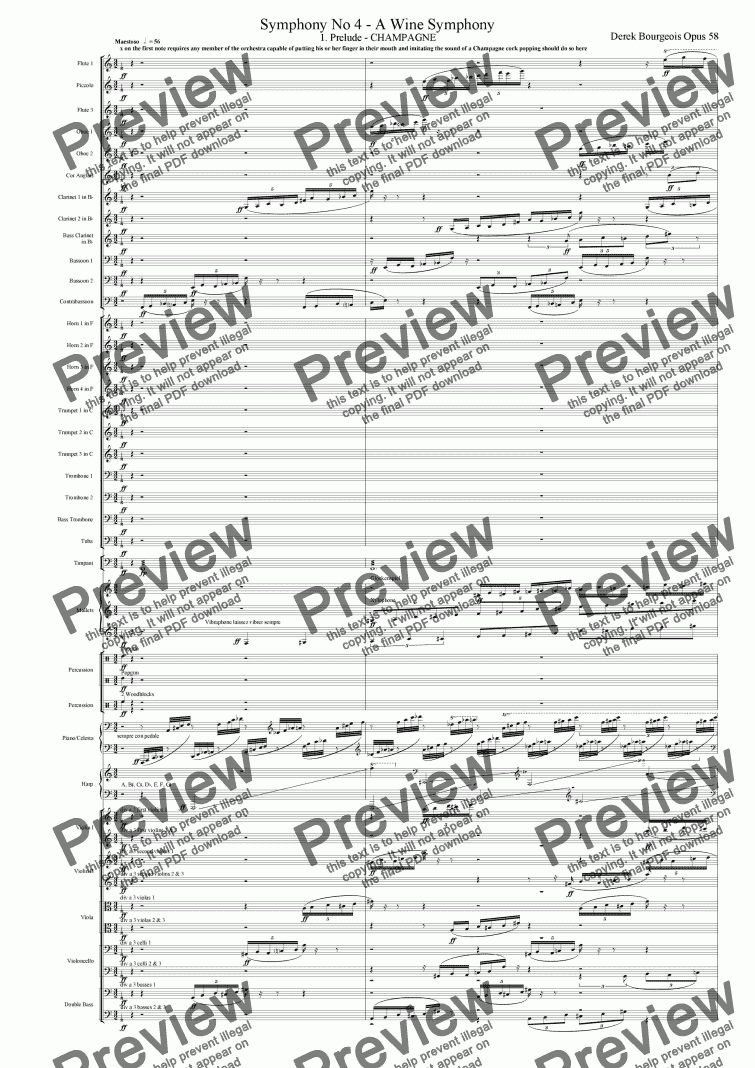 Composer
Derek Bourgeois
Year of composition
1978
Lyricist
none
Difficulty
Difficult (Grades 7+)
Duration
11 minutes
Genre
Modern classical music
License details
For anything not permitted by the above licence then you should contact the publisher first to obtain permission.

Although the organisation of the symphony is very strict, and the blend of the themes as represented by the grape varieties of each region is carefully adhered to, the character of the music of each movement is my own subjective response to the wines of the region. Wines lovingly recalled during the composition of each movement appear in brackets after the titles.

Tonal centre F minor - (Louis Roederer Cristal Brut, Krug, Taittinger Comtes de Champagnes, Mo?t & Chandon, Dom Perignon) After a popping cork, and amidst rising bubbles throughout the rest of the orchestra, the brass play in counterpoint the two themes representing the two grapes that are blended to make champagne, the Pinot Noir and the Pinot Chardonnay. As this subsides, the movement leads straight into :-

Tonal centre E minor (Ch?teaux Lafite, Petrus, Mouton Rothschild, Latour, Margaux, Haut Brion, Ausone, Cheval Blanc, Vieux Ch?teau Certan, Figeac, Haut Brion Blanc and Yquem) This movement is in strict sonata form. If the exposition seems a little severe, it is because it represents the young wines (yet undrinkable) of the M?doc and Saint Emilion / Pomerol. Time (and the recapitulation) will mellow them. The white wines of Graves and the great sweet wines of Sauternes are represented at the end of the development. Exposition 1st subject group Cabernet Sauvignon (and Cabernet Franc, its inversion) is the principal grape variety of the M?doc. Later in the movement it is blended with the :- 2nd Subject group Merlot - principal grape variety of St Emilion and Pomerol, much softer in its youth than the Cabernets, but still unresolved. Development Here the blending is done as the grape varieties struggle to assert their true characteristics. As the development reaches its close we hear first the Sauvignon Blanc theme, the grape of white Graves (and a close relative of the Cabernet Sauvignon) and then the Semillon which produces the lush sweet wines of the Sauternes, overwhelming in their richness. As this fades we begin the :- Recapitulation Here the themes of the exposition mellow and yield their true character. Coda The wistfulness that always accompanies the departure of a great bottle of wine is characterised here.