Once in Royal David's City

By: Henry J. Gauntlett
For: String quartet
This music is in your basket
View basket
Loading... 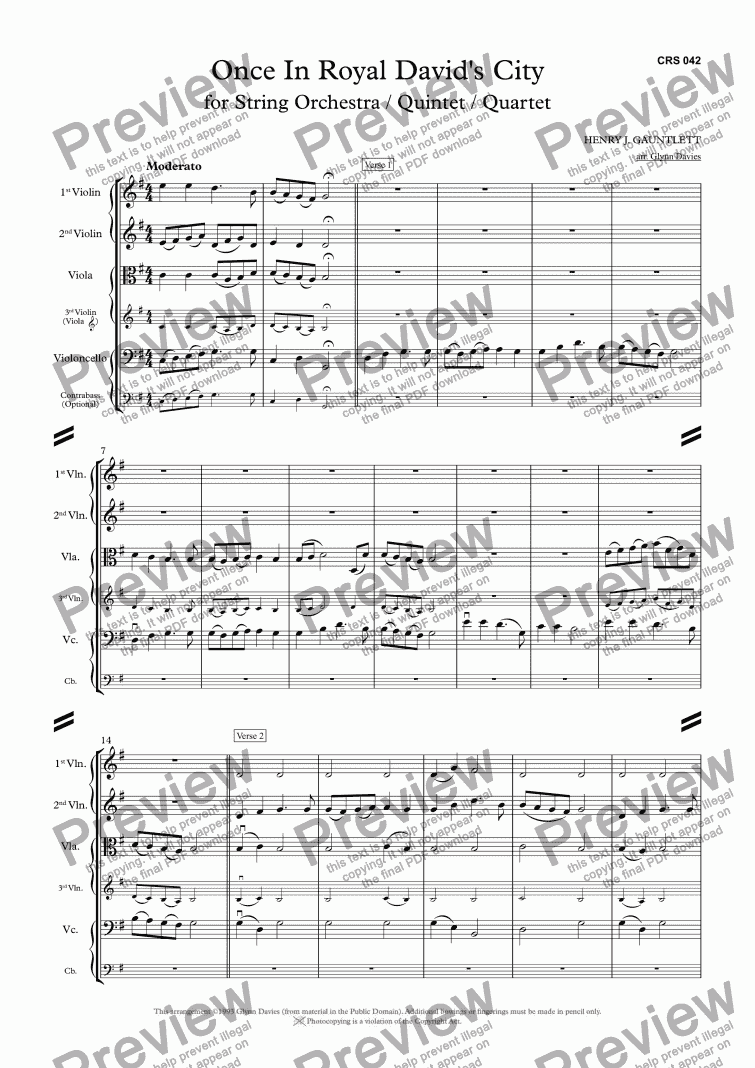 Once in Royal David's City

Composer
Henry J. Gauntlett
Arranger
Glynn Davies
Difficulty
Moderate (Grades 4-6)
Duration
2 minutes
Genre
Classical music
License details
For anything not permitted by the above licence then you should contact the publisher first to obtain permission.

The text for this joy-filled Christmas carol was written by Cecil Frances Alexander (1818-1895), who was the wife of the Bishop of Londonderry, and it was originally published in her collection, Hymns for Little Children, of 1848. The melody that set the words subsequently appeared in a volume entitled Christmas Carols published in the following year.

Usually performed in the key of G major, the melody describes a slow climb upward for each two lines (from the dominant note, D, to the octave higher) with the highest peak reached in an arpeggio on the tonic chord, G major, followed by a scalewise descent to the tonic note. The last two lines begin on the higher E note, emphasizing the names of Mary and Jesus in the first verse. A beautiful touch is added by the passing tones in the inner voices on the concluding line of each verse.

There are two harmonizations, each in four-part choral writing, for this tune. The first is the original by Gauntlett in which the first two lines occur all within the G major scale with no alterations. The second set of two lines repeats the first set except for a fleeting modulation in the second measure (VII, V, I in the dominant key) which provides a pleasant yet brief change in the atmosphere. The fifth line is stated in even chords with the last melody tone suspended on the third of the scale. The sixth line is, as stated above, elaborated with passing tones and ends by cadencing on the tonic.

Reviews of Once in Royal David's City