Theme and Variations in G Minor for Contrabassoon and Orchestra

By: David Stybr
For: Orchestra
This music is in your basket
View basket
Loading... 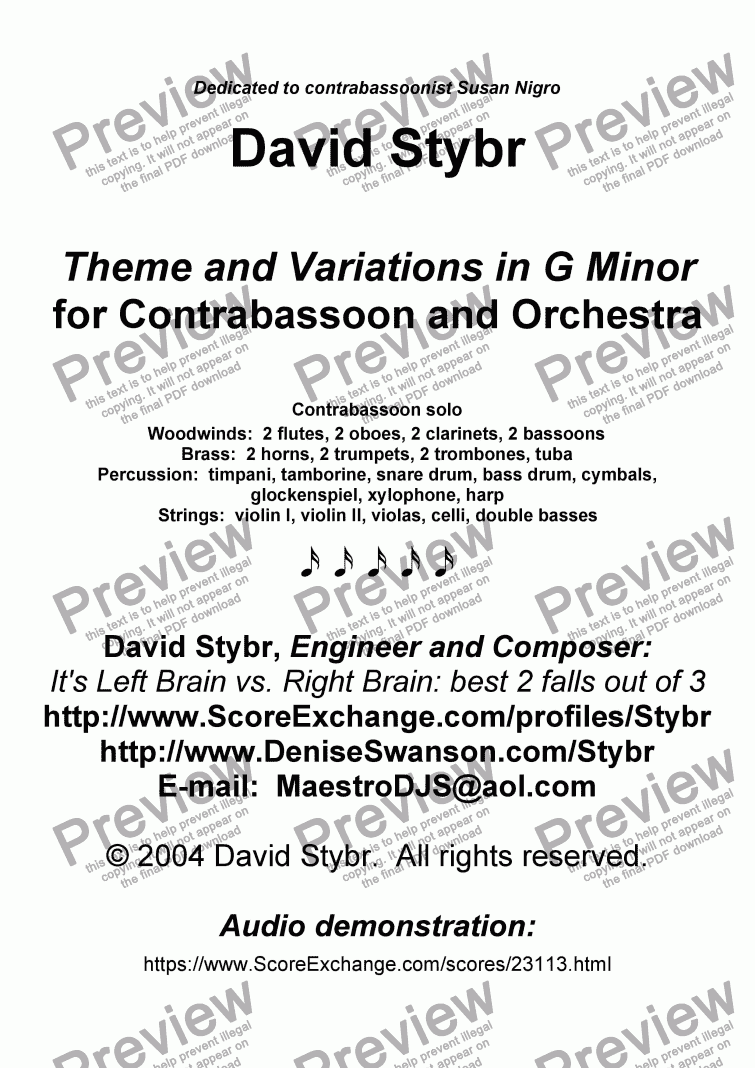 Theme and Variations in G Minor for Contrabassoon and Orchestra

By: David Stybr
For: Orchestra

Composer
David Stybr
Year of composition
2004
Lyricist
none
Difficulty
Difficult (Grades 7+)
Duration
18 minutes
Genre
Modern classical music
License details
For anything not permitted by the above licence then you should contact the publisher first to obtain permission.

David Stybr: Theme and Variations in G Minor for Contrabassoon and Orchestra Commissioned by acclaimed contrabassoonist Susan Nigro ( www.bigbassoon.com ). She performed the world premi?re at a pair of concerts with the New Philharmonic Orchestra and Music Director Kirk Muspratt at the College of DuPage, Glen Ellyn, Illinois: Friday and Saturday, February 25 and 26, 2005.

Now under consideration for a performance in N�rnberg, Germany.

Note: This score is at sounding pitch. Parts available upon request from the composer (David Stybr), with Susan Nigro as the designated soloist (http://www.bigbassoon.com).

Commentary by Left Brain vs. Right Brain: LB: "Some months ago I attended a recital by contrabassoonist Susan Nigro, which made me realize just how little I understood this unusual instrument. What impressed me most about her playing was how beautifully she made the contrabassoon sing." RB: "You betcha! I drafted some variations to explore the dramatic, lyrical, humorous etc. possibilities of the instrument. When Susan Nigro saw the first draft, she enthusiastically offered me a commission to complete the piece." LB: "Structurally this piece has some unusual features. For example, Variation 1 precedes the theme and opens the work. Var. 1 also recurs at key moments as a unifying feature. The ten variations are divided into 4 groups of 4+3+2+1, much like a small symphony or concerto: Allegro, Scherzo, Andante and Finale." RB: "Var. 4 is a fugue that wants to be chromatic, but firm C Major and G Major chords act like killjoys who try in vain to keep everything nice and diatonic. Methinks it's tons of fun to make 2 harmonic styles fight each other. Then when I deconstruct the fugue and subtract voices, and also step down by 3rds instead of up by 5ths, well let's just say that my old music professor wouldn't be happy. Then Vars. 5 and 6 are good clean fun, kinda like sorbets to cleanse the palate before we tackle the cadenza and the slow variations. LB: "I do not compose a great deal, and tend to destroy most of what I create, or consign it to a desk drawer. However, occasionally I produce something which has a spark of life, and this might be one of them. For example, Vars. 8 and 9 may be may be among my better creations." RB: "The hardest part was the final variation. Problem: How could I follow that glorious Romanza Notturna? A hint: Vars. 8 and 9 have transported the listener to a higher plane, but we need to come back to Earth. Or do we? Inspiration comes from the darndest places, in this case from another planet. I was looking at those neat photos from the two Mars Exploration Rovers which had just landed on the red planet. The gorgeous photos of otherworldly sunrises and sunsets on Mars (with a bluish halo around a white Sun in a red sky) and the delightful images of the landers bouncing to rest (surprisingly gently) in their protective airbags, were amazingly inspirational. Suddenly the Promenade dell'Alba, or Dawn Promenade, appeared in my mind, and this concludes the work. You might notice the sunny character and bouncy tempo of this Var. 10, but also a strong hint of drama." LB: "This also brought to mind a phrase from Les Illuminations by French poet Arthur Rimdaud: "J'ai embrass? l'aube d'?t? [I have embraced the summer dawn]." Observant listeners might notice that this final section is itself a variation of a variation (Var. 6), but with a very different character. It brings the work to a triumphant close. The score was completed on Leap Day 2004 at Lake Tahoe, Nevada."
News Bulletin: 1 January 2005. Right Brain: "I wanted to report all the gory details of the rehearsals, but they're just too boring. Instead, I'll fabricate this utterly ficticious rehearsal exchange:"
Conductor: "Hey, this rehearsal is closed to the public! The doors are bolted and chained." Composer (climbing through a window): "But I'm the composer!" Conductor: "Baloney. If you're the composer, how come you're not dead?" Composer: "Well, I was dead, but I got better." Conductor: "Now that you're here…. Maestro, in bar 394, is note 6 a G-natural? No, wait, it's A-natural, I mean B-natural, er C-natural…. Oh heck, it's a fly! (SWAT!!) Now it's a tone cluster." Composer: "That's quite a downbeat you have. Any other questions?" Conductor: "Maestro, in bar 365?, should the baton be played with metal or wooden mallets?" Composer: "Neither. Use a musical saw. Double sharp!"