J. Dowland - If My Complaints Could Passions Move (arranged for string quartet), Op. 8

By: John Dowland
For: String quartet
This music is in your basket
View basket
Loading... 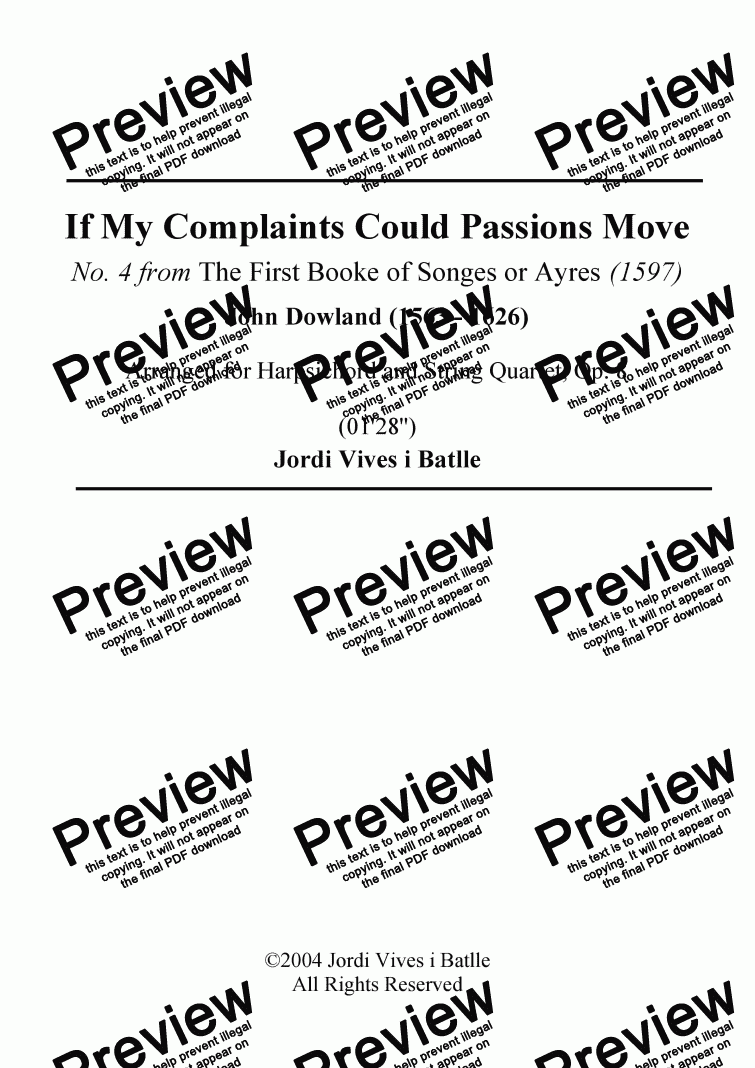 J. Dowland - If My Complaints Could Passions Move (arranged for string quartet), Op. 8

By: John Dowland
For: String quartet

Composer
John Dowland
Year of composition
1597
Arranger
Jordi Vives i Batlle
Lyricist
John Dowland
Difficulty
Moderate (Grades 4-6)
Duration
2 minutes
Genre
Classical music
License details
For anything not permitted by the above licence then you should contact the publisher first to obtain permission.

I have arranged John Dowland?s song "If My Complaints could passions Move" in its four-part version plus transcription from the lute tablature, making a setting for string quartet with harpsichord (or, optionally, piano) as the accompanying instrument.

My source is the original edition, printed (moveable type, five lines per stave), in "table book" layout, with soloist voice and lute tablature on the one hand, and three vocal parts on the other. This is the fourth in a series of songs (all for one voice and lute, or four voices, by the same composer), published in "The Firste Booke of Songes and Ayres of Foure Partes with Tableture for the Lute" (London, 1597).

Original barlines in cantus are metric and have been retained. Missing barlines in altus, tenor and bassus have been added. The clefs have all been modernised. Time signatures (omitted in the cantus" part) are written in the original as a figure 3, indicating triple time. A modern equivalent would be 3/2, but I have adopted 3/4 because of the halving of note duration.

The lute tablature has been realised as a keyboard part with the chords interpreted polyphonically. To complete my arrangement, the original part names: cantus, altus, tenor and unnamed (bassus) have been converted into string quartet parts with the addition of slurs at my discretion. In addition, first and second time "terrace dynamics" for each repeat section, and additional tempo markings, have been added. In case a piano is used, I have included dynamics for the keyboard part. These can be omitted for the harpsichord.

Overall, the emphasis has been to keep things simple and make a version that is as faithful to the original as possible. This is done out of major respect for the music of this great composer, hoping that this presentation will help divulge his great songs for the benefit of many.

Reviews of J. Dowland - If My Complaints Could Passions Move (arranged for string quartet), Op. 8