Sign in / Register
HomeInstrumentationsOrchestraThree Fantasy Variations on "The River is Wide"

Three Fantasy Variations on "The River is Wide"

By: Cedric Peachey
For: Orchestra
This music is in your basket
View basket
Loading... 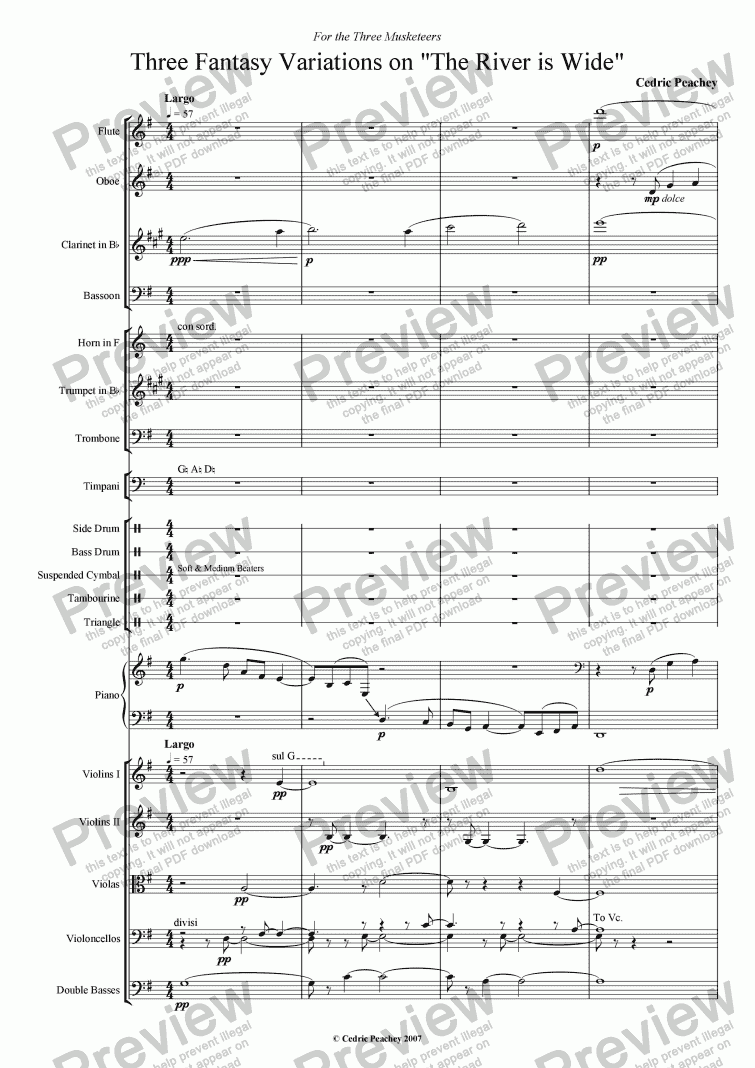 Three Fantasy Variations on "The River is Wide"

By: Cedric Peachey
For: Orchestra

Composer
Cedric Peachey
Year of composition
2005
Lyricist
none
Difficulty
Difficult (Grades 7+)
Duration
8 minutes
Genre
Modern classical music
License details
For anything not permitted by the above licence then you should contact the publisher first to obtain permission.

In 2004, I began working on a set of orchestral variations on the English folk song "Waly Waly", also known as "The River is Wide". As the variations developed, I found they mirrored the outline of a well-known play by Shakespeare and I gave each variation a sub-title that followed this theme. To date, I have completed four variations and have another two in draft. When the Forum London Composers Group called for scores for an orchestral workshop in 2005, I re-cast three of the variations for the smaller forces of the Forum Sinfonietta. The variations are entitled: The Masque; The Gaze; Flight to the Crypt.

In July 2007, the St Albans Symphony Orchestra announced its second Composers Event and invited unpublished composers to submit scores for a concert in September. Six scores were to be chosen by Paul Patterson, Professor of Composition at the Royal Academy, for rehearsal and performance by SASO in conjunction with its professional partner, the City of London Sinfonia, under the baton of Dr James Ross. I submitted a slightly revised score and was one of six composers chosen from 26 entries. The works each went through a 30-minute rehearsal followed by a critique from Paul Patterson. Once all six pieces had been rehearsed, they were played the same evening as a concert.

Performing six unfamiliar pieces in succession, in a variety of styles, is no small achievement and it is a tribute to James Ross and the orchestra, most of whom are amateurs, that the concert came together so well. We were fortunate to have the performance recorded and I have attached an mp3 of my piece. Although betraying the pressures and limitations of a very compressed rehearsal schedule, the result was personally satisfying and demonstrated once again the unique value of a live performance.

My grateful thanks to James Ross, the members of SASO and to Paul Patterson for a truly memorable and rewarding day. For those who live anywhere near St Albans, I strongly recommend visiting the SASO website and viewing their varied and ambitious programme of forthcoming concerts: www.nstansfield.f2s.com/conductor.htm

Reviews of Three Fantasy Variations on "The River is Wide"