By: Michael H, Mak
For: Orchestra
This music is in your basket
View basket
Loading... 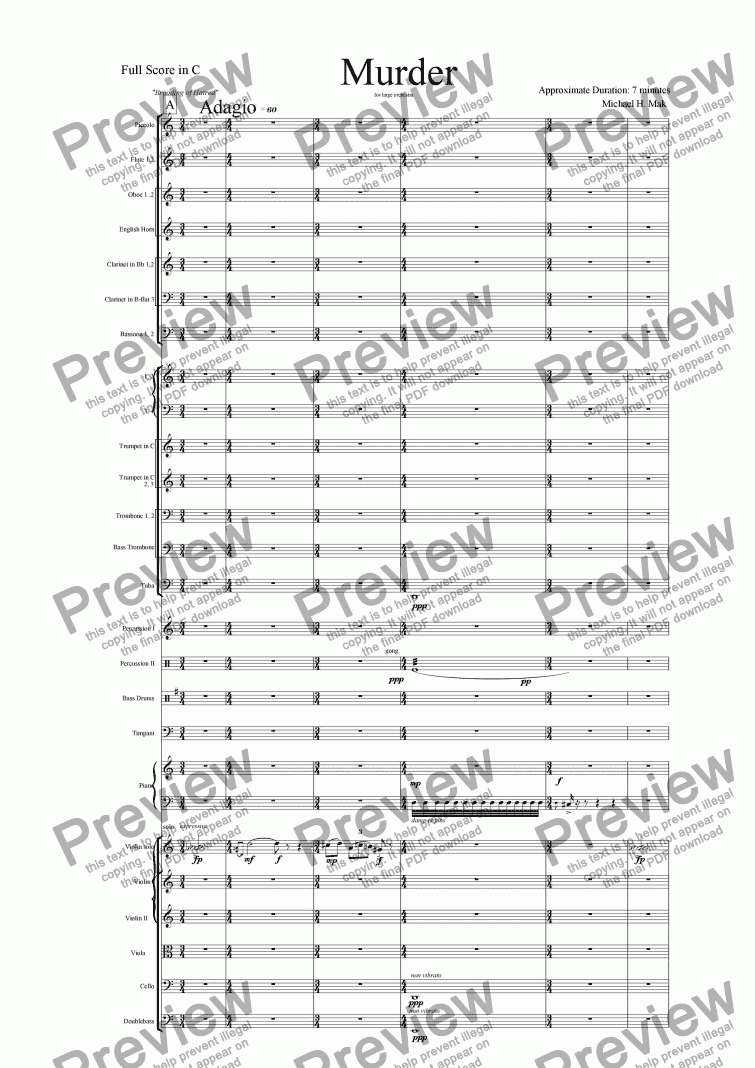 By: Michael H, Mak
For: Orchestra

Composer
Michael H, Mak
Year of composition
2003
Lyricist
none
Difficulty
Difficult (Grades 7+)
Duration
7 minutes
Genre
Modern classical music
License details
For anything not permitted by the above licence then you should contact the publisher first to obtain permission.

This piece tells a story of a murder. There are two main element of a murder present in the music: 1, rages in the murderer?s mind, e.g. hatred, anger, envy (melody of the opening violin solo) 2, the actually intent to kill (the 4 note pattern C# - B# - A -G, e.g. mm. 30, 2nd violins) The murder-to-be starts out relatively sane and calm, brooding the reasons to kill with hatred and anger, where later he acquires the intent to actually commit the act. These two elements manifest as the piece progress with increasing vigor, where the fanatical thoughts begins to emerge (mm. 44). This leads on to a long struggle between his sanity mind and irrational monstrosity of murder, where the subject begins to lose his sanity. The tension of the struggle finally erupts into the climax (mm. 89), and the subject is to be taken over by the raging emotion of destruction. The murder commences (mm. 114) with a chase, where the subject successfully pins down his victim into a dead-ended alley. The fight begins as the victim attempts to defense himself (mm.127). However, hopeless overpowered, victim finds himself against the wall, facing toe-to-toe with the murderer. The murder, armed with a sharp object, strikes 2 fatal blows into the victims? ribcage (mm.147, 148), yet still overcharged by rages, he stabs the dying victim over and over again for 11 times (13 stabs in total). After the vigorous bloodshed, the murderer finally returns to his sanity, startled by the nightmarish murder scene.

The mp3 provided is recording from an orchestra reading played by the Peabody Symphony Orchestra, with conductor Terri Murai. This piece is the winner piece for the Macht Orchestral Competition (2003-2004) in Peabody Institute.

Sorry, there's no reviews of this score yet. Please .
In order to submit this score to ScoreExchange.com Michael H, Mak has declared that they own the copyright to this work in its entirety or that they have been granted permission from the copyright holder to use their work. If you believe that this score should be not available here because it infringes your or someone elses copyright, please report this score using the copyright abuse form.