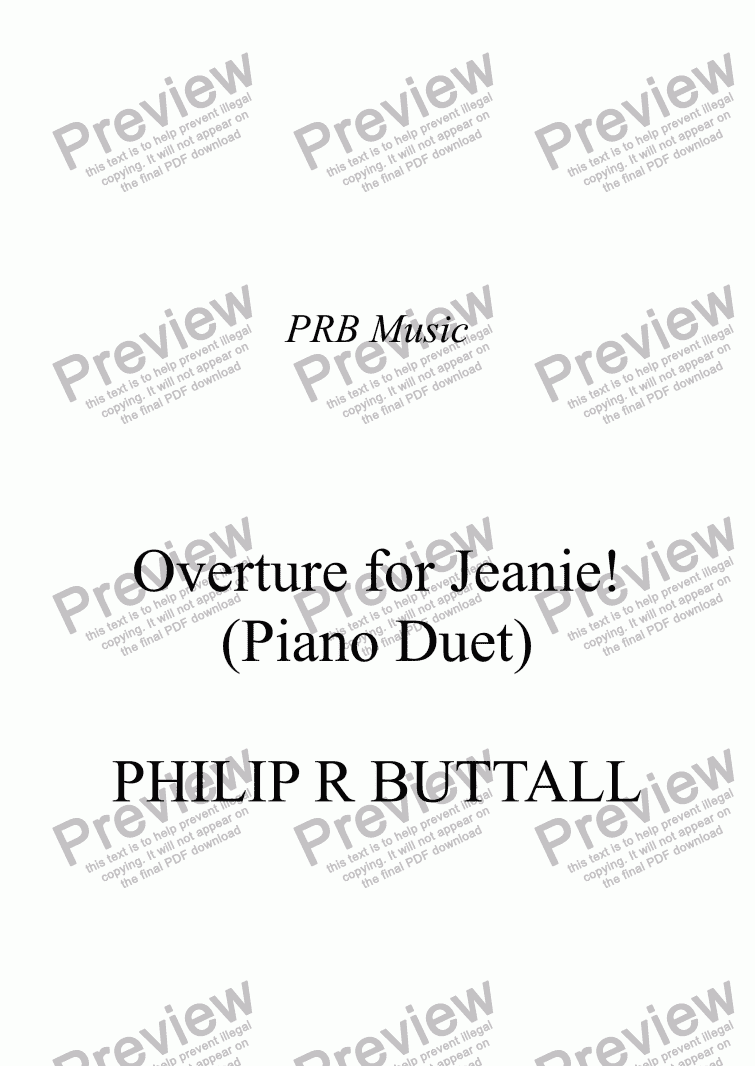 Composer
Philip R Buttall
Year of composition
2004
Lyricist
none
Publisher
PRB Music
Difficulty
Difficult (Grades 7+)
Duration
6 minutes
Genre
Modern classical music
License details
For anything not permitted by the above licence then you should contact the publisher first to obtain permission.

Overture for Jeanie was specially written for the 7th Annual WARchild Gala Concert, held in the City Museum, Plymouth, on May 22nd, 2004, and played by myself and Clive Jenkins.

The ’Jeanie’ in the title is Jeanie Moore MVO, who has been organising these Gala Concerts, as well as the ongoing International Series of Lunchtime Recitals at the City Museum, where the first performance was given.

This piece is based on her Christian name, turning ’Jeanie’ into the two notes G and E (below). This motif is then used as the main thematic material for a number of different sections which aim to hint at some of the different musical genres heard throughout the season. After a typical ’Broadway-style’ opening, the Jeanie theme then changes into a waltz, typical of some of the ’songs from the shows’ sung over the season, then into a paso doble section, typical of some of the flamenco and guitar music heard, then into a jazz section, before setting off with some Bach-like counterpoint in a more classical vein. This leads to a mock ’patriotic’ and rather Elgarian section, which acknowledges Jeanie’s award of the MVO (Member of the Royal Victorian Order). A short, faster section closes the Overture. There’s just a very brief reference to another well-known ’Jeanie’, but their hair colour is certainly somewhat different! Whilst all the sections are specific references to Jeanie Moore MVO, by virtue of being based on the ’G & E’ motif, the piece would still make a good opening, or closing piece for any piano duettists’ recital.
There is now an arrangement of this piece for Wind Band, where its title has sensibly been changed to Show Time.

Why one real regret in having written this piece was that, during its composition, my dear late mum, who sadly passed away just over a month before its first performance, kept saying to me: "You’ve never written a piece like this for me, but you’re writing one for Jeanie Moore!"

Of course, with the benefit of hindsight, I now realise how wrong I was at the time, not just because mum died, but also because she was so deserving of a musical tribute. Yes, ’Sylvia’ would have given me a few more musical problems, but ’S’ could provide me with ’Es’ (E flat in German), and I’d just have to get on with it from there.

Incidentally, you can hear mum singing on a couple of MP3 files: The Violet and New Tomorrows. Hopefully in time I, too, will be able to bring myself to listen again to her singing.

Reviews of Overture for Jeanie!