Souvenirs de Munich: A Quadrille based on Favorite Themes from Tristan & Isolde by Richard Wagner

By: Emmanuel Chabrier
For: Concert band / wind band
This music is in your basket
View basket
Loading... 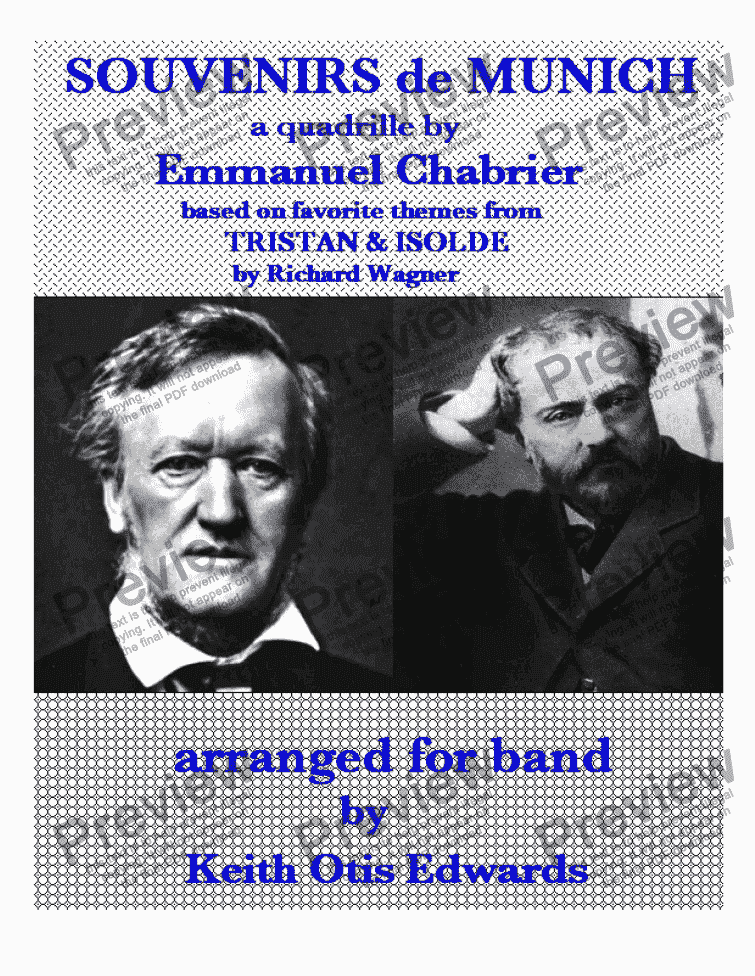 Souvenirs de Munich: A Quadrille based on Favorite Themes from Tristan & Isolde by Richard Wagner

Composer
Emmanuel Chabrier
Year of composition
1887
Arranger
Keith Otis Edwards
Year of arrangement
2004
Lyricist
none
Difficulty
Difficult (Grades 7+)
Duration
7 minutes
Genre
Classical music
License details
For anything not permitted by the above licence then you should contact the publisher first to obtain permission.

Originally for piano, I've arranged this delightful piece for concert band. Most listeners will be puzzled that the themes from "Tristan & Isolde" are not immediately apparent, but if you have the fortitude, listen to Wagner's entire opera, and all these melodies are in there.

Chabrier (1841-1894) wrote the original piano piece in the 1880s after attending a performance of Tristan & Isolde in Munich. Chabrier was moved to tears by the love story, but when he returned home, he wrote this burlesque, a pastiche of the various themes from the opera. It was a curious thing to do. Rather than writing a tribute to Wagner's masterpiece, it was as if he instead squirted Wagner in the face with a seltzer bottle. Wagner's favorite conductor, Hans von Bülow, became enraged when he heard Chabrier perform this parody, but Francis Poulenc described Souvenirs de Munich as "irresistibly funny", where Wagner's principal themes appear with "false beards and fake moustaches."

The five movements (joined by brief transitions of my own hand) are: I. PANTALON (trousers) II. ÉTÉ (summer) III. POULE (hen) IV. PASTOURELLE V. GALOP (a Galop was a popular 19th-century dance)

Those who are familiar with the original piano score by Chabrier will notice that I have simplified the music and removed many arpeggios and runs to make it playable for school and amateur bands, but without losing any of the spirit of the music.

If you have purchased from SibeliusMusic in the past and were disappointed in the appearance of the parts, rest assured that I have made a separate part for each instrument, all are exceptionally neat, and they print out beautifully. A slightly smaller staff size also means fewer pages to print out. You will not be disappointed.

With the purchase of the score you are entitled to parts for Euphonium in treble clef, Alto Clarinet, E-flat Alto Horns, Ophicleide (in C), or any other instrument you need.

The Invaders - march, Walpurgisnacht, Story of the Five Joaquins (Mariachi for band), Sophia Begets the Demiurge, The Sermon of St. Francis to the Fish and Fight Song of Wossamotta U. (march)

Reviews of Souvenirs de Munich: A Quadrille based on Favorite Themes from Tristan & Isolde by Richard Wagner