Sign in / Register
HomeInstrumentationsString quintetString Quintet No. 2 in B Minor (complete)

String Quintet No. 2 in B Minor (complete) 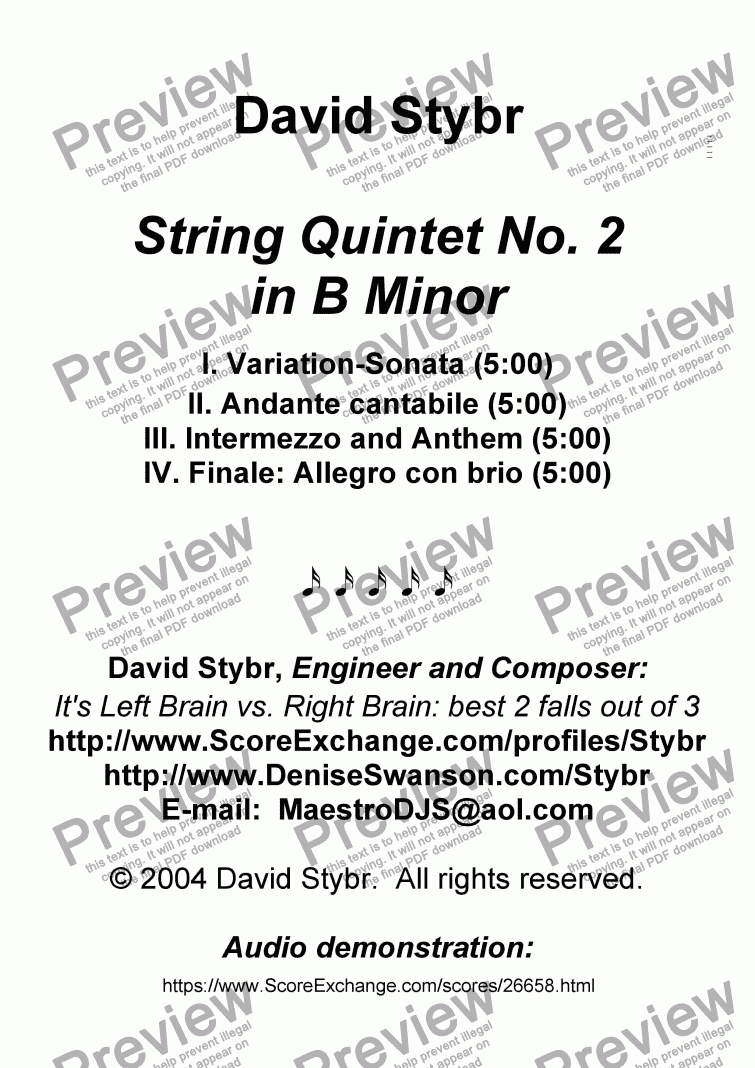 String Quintet No. 2 in B Minor (complete)

Composer
David Stybr
Year of composition
2004
Lyricist
none
Difficulty
Difficult (Grades 7+)
Duration
20 minutes
Genre
Modern classical music
License details
For anything not permitted by the above licence then you should contact the publisher first to obtain permission.

Commentary by Left Brain and Right Brain – RB: "The string quartet is an incredibly flexible medium, but much as I love the great masterpieces, composers have unfortunately omitted the marvelous double bass. That's why I write string quintets instead: to put the bass voice in its rightful place."

I. Variation-Sonata (5:00) – LB: "This movement was completed in September 2003 in Cleveland, Ohio, and combines sonata form with variations. Two main themes are stated as in typical sonata form, but their treatments are more typical of variation technique. The brief Introduction is in D Minor, though the music soon moves into the tonic, B Minor. This presages the unusual tonal structure of the movement." RB: "A good little minor key sonata form usually states Theme I in the tonic minor (B Minor) and Theme II in the relative major (D Major), but you pretty much blew that out of the water. Instead, Theme II is in the tonic minor (D Minor) of the relative major. We can get away with this, because Theme I crawls around in half-steps, but Theme II is a slow valse triste which opens up into whole steps and almost sounds major by comparison. Am I making any sense?" LB: "Reasonably so, which itself is a novelty. Theme II is then varied into the codetta of the exposition. Next Theme I is restated in the dominant minor (F-Sharp Minor) and given 2 variations ? la valse grotesque; Theme II is restated in B Minor (the tonic) and varied once more; and finally a brief coda based on both Theme I and the Introduction concludes the movement." RB: "It couldn't come soon enough for me. The first movement was originally about twice as long, until I gutted some variations which were only for balance, but they were ballast instead. Keep it short and simple. About all we can say for sure is that we can write such damn good melodies!"

II. Andante cantabile (5:00) – LB: "The 1st and 3rd movements are in B Minor and extremely chromatic. By contrast this Andante cantabile – in A Major, C-Sharp Minor and E Major – is harmonically very simple. One self-imposed challenge was to create 2 themes of 2 phrases each, in which the 2nd phrase inverts the 1st. Another challenge was to harmonize each theme with further inversions of itself. The extremely simple harmonies permit these thematic manipulations with the greatest of ease." RB: "As if that weren't enough gymnastics, in 1 or 2 places I also play both themes in counterpoint with each other. One more challenge was to avoid accidentals at all, but doggone it, a few sneaked in anyway. Looks like I was none too sharp eh? Anyway my favorite section is smack dab in the middle, with some blissfully ecstatic music." LB: "Another consideration was that B Minor has 2 sharps, whereas B Major has 5 sharps. Therefore this movement alternates 3 and 4 sharps. It was completed in May 2004 in Washington, DC."

III. Intermezzo and Anthem – RB: "The first draft of this movement poured forth on a blissful August 2003 vacation in Bermuda. After 437 revisions, with criticisms of my previous work in mind, I hammered the music into shape. Little did I know that Hurricane Fabian would pour forth and hammer Bermuda itself a month later." LB: "One pleasure of composing is the possibility that the music might never be finished, but evolve indefinitely. This movement gradually grew over the course of a month into a modified rondo in 6/8 time which approximates scherzo and trio form: AAABBACCAABC." RB: "Gesundheit! Impressive alphabet soup you have there. Good things come in threes, like these 3 themes. Say what you will, our 2 minds can create some terrific melodies. Themes A and B form an agitated Intermezzo section in B Minor. Then the key shift-a-roonies to the relative major, the tempo slows, and Theme C is a soaring Anthem in the relative major (D Major) for viola. It's developed straightaway in a very bluesy if not downright boozy floozie fashion." LB: "Quite so, and counterpoint abounds. Structurally, Theme A is assembled from three 3-bar phrases, played thrice, and Theme B evolves from a phrase in Theme A. Moreover, Themes A and C both contrast duple and triple rhythms: a triplet Theme A over a duplet accompaniment, and a duplet Theme C over a triplet accompaniment. As usual, the double bass adds its distinctive voice to enrich the standard string quartet ensemble into a string quintet."

IV. Finale: Allegro con brio (5:00) – RB: "The Finale is d?j? vu all over again because it plagiarizes the Introduction in D Minor from the first movement. But straightaway it veers into D Major for some unearthly reason." LB: "No new themes appear in the Finale; its 4 sections recall themes from the previous 3 movements. The 1st section Allegro con brio grows into quadruple counterpoint, and the key rises by a 5th as each theme is added. D Major (2 sharps): Mvt. II, Theme II; A Major (3 sharps): Mvt. II, Theme I; E Major (4 sharps): Mvt. I, Theme I; B Major (5 sharps): Mvt. III, Anthem." RB: "That's a creepy way to creep up to B Major, and we stay in 5 sharps from then on. Then the 2nd section Allegro moderato is a jazzy pizzicato fugue which juggles Mvt. III, Anthem as the Subject and Mvt. II, Theme II as the Countersubject. Can we have fun or what?" LB: "Thus far the Finale has been in duple meter, but the 3rd section Allegretto is in 2 forms of triple meter. A valse triste in G-Sharp Minor recalls Mvt. I, Theme II in 6/4 time but it is repeatedly interrupted by Mvt. III, Intermezzo in 6/8 time. Polymeters are unusual in my music." RB: "Then we're in the home stretch in the 4th section Allegro con brio. Glowing renditions of Mvt. III, Anthem and Mvt. II, Theme II – over and under tremolos, and even a couple of arpeggios – make a pretty neat coda." LB: "After nearly a year of sporadic work on this string quintet, the Finale was completed in June 2004 in Springfield, Missouri."

String Quintet No. 2 in B Minor: II. Andante cantabile

Reviews of String Quintet No. 2 in B Minor (complete)