By: Cedric Peachey
For: String quartet
This music is in your basket
View basket
Loading... 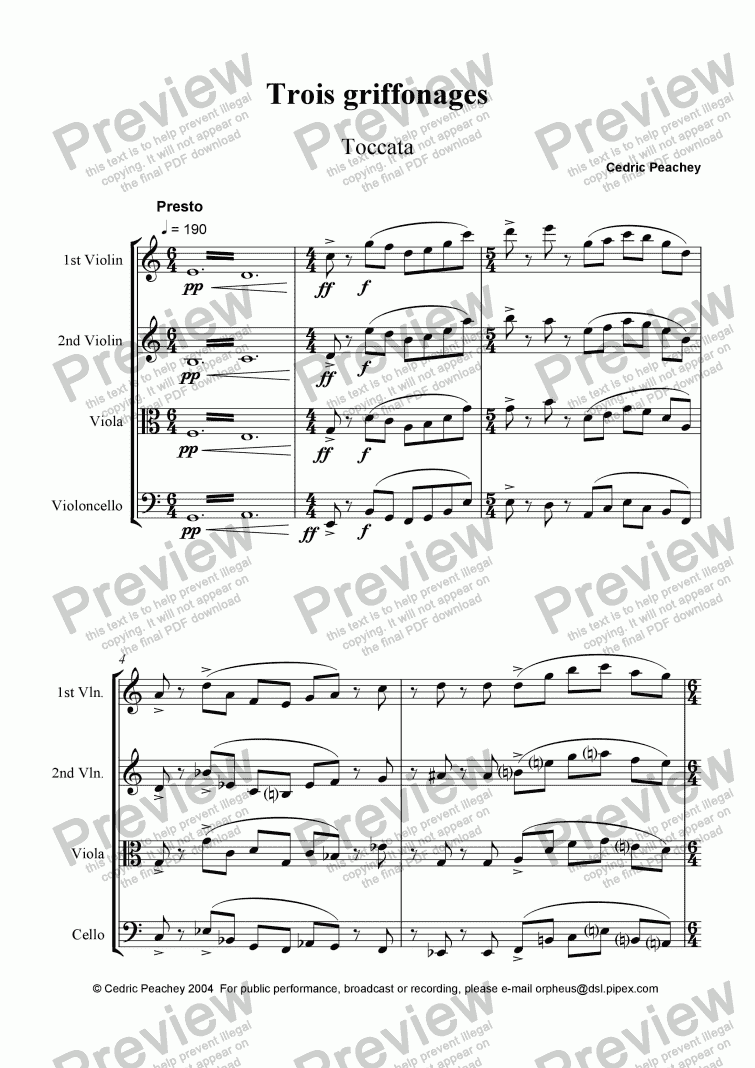 By: Cedric Peachey
For: String quartet

Composer
Cedric Peachey
Year of composition
2004
Lyricist
none
Difficulty
Moderate (Grades 4-6)
Duration
2 minutes
Genre
Modern classical music
License details
For anything not permitted by the above licence then you should contact the publisher first to obtain permission.

This is the first movement of a three movement work that had its first performance on 13th June 2004 as part of the Forum London Composers' Group Piece of the Year Competition. The three movements are:

The movements are linked thematically, with the second movement using material taken from the first while the third movement uses a twelve-tone row based on the accompaniment to the opening theme in the second.

The three movements together cover a progression in style, language and mood. The first is extrovert, primarily homophonic and stays largely with ?white notes?. The second movement is quiet, reflective, contrapuntal and modal in language, although the underlying harmony is sometimes chromatic.

"Nuit Blanche" means 'sleepless night' and this is reflected in the mood of the third movement, which is unsettled and tense in its changing tempi, rhythms and dissonant textures, much of the music being made up of short fragments and motifs. Its central section allows the players some freedom to depart from the written score and create their own mix of 'controlled chaos', while following the overall shape and development of their individual parts.

The rules of the competition required flexible scoring with each part capable of being played by several alternative instruments:

For the purposes of uploading the scores, the first and third movements are presented for string quartet and the second movement for a wind quartet.