By: Johnson Lee
For: Marching band
This music is in your basket
View basket
Loading... 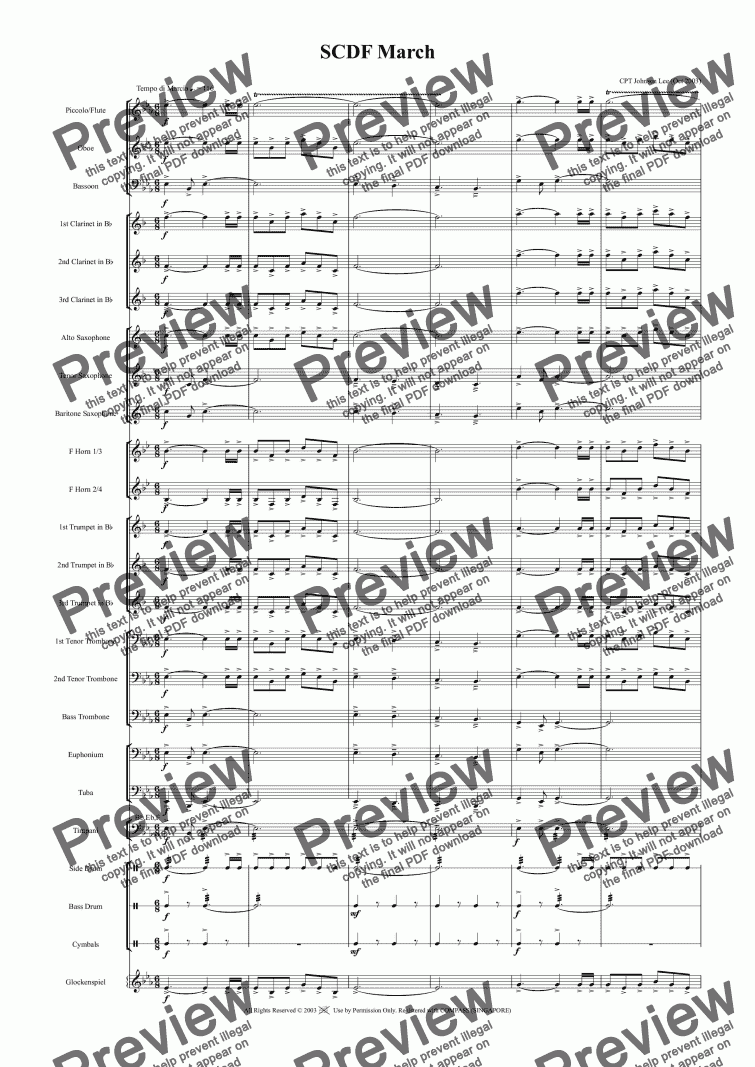 By: Johnson Lee
For: Marching band

Composer
Johnson Lee
Year of composition
2003
Lyricist
none
Difficulty
Easy (Grades 1-3)
Duration
4 minutes
Genre
Other
License details
For anything not permitted by the above licence then you should contact the publisher first to obtain permission.

This March composition is dedicated to the Singapore Civil Defence Force whose courage and resilience in the face of disaster and danger has inspired myself and many others.

In particular, I would like to pay tribute to Disaster Assistance and Rescue Team (DART) and Special Rescue Battalion (SRB). On Tuesday 20 April 2004, they were activated to salvage and rescue at site of the Nicoll highway caved-in, where the supporting wall collapse on to the underground MRT Circle Line tunnel construction. Conditions were particularly difficult as water and mud from Kallang Basin seeped in and the site was not stable. Undaunted by the magnitude of the disaster, they were relentless in their rescue efforts. Despite the difficult conditions and the unknown dangers that lay before them, they worked round the clock and managed to extricate 3 bodies. 28 SCDF officers were then conferred the Medal of Valour, the highest national honour reserved for those who have risked their lives in acts of courage.

Shortly after the Nicoll highway rescue operations were called off, another disaster occurred. On 29 April 2004, a tumble of reinforcement bars collapsed and crashed upon the workers in the Fusionpolis industrial site and once again the SCDF bravely rescued 29 casualties and recovered 2 bodies. Besides these 2 incidents, the SCDF have responded to many other disasters both in Singapore and abroad.

The Singapore Civil Defence Force has certainly lived up to their core values. Their presence and professionalism, have given strength and peace of mind to fellow Singaporeans and to all who call Singapore their home. They have saved lives, properties and in my humble opinion rescued our spirit and reassured our hopes

To the Men and Women of SCDF, I salute you.

Vigilant and Ready, We The People Of Singapore/ Singapore Our Homeland, SINGAPORE WARRIORS A Symphonic Wind Band arrangment of ’Tentera Singapura’ by CPT Abdullah and March In Harmony

Sorry, there's no reviews of this score yet. Please .
In order to submit this score to ScoreExchange.com Johnson Lee has declared that they own the copyright to this work in its entirety or that they have been granted permission from the copyright holder to use their work. If you believe that this score should be not available here because it infringes your or someone elses copyright, please report this score using the copyright abuse form.