Symphony No 06 (A Cotswold Symphony) 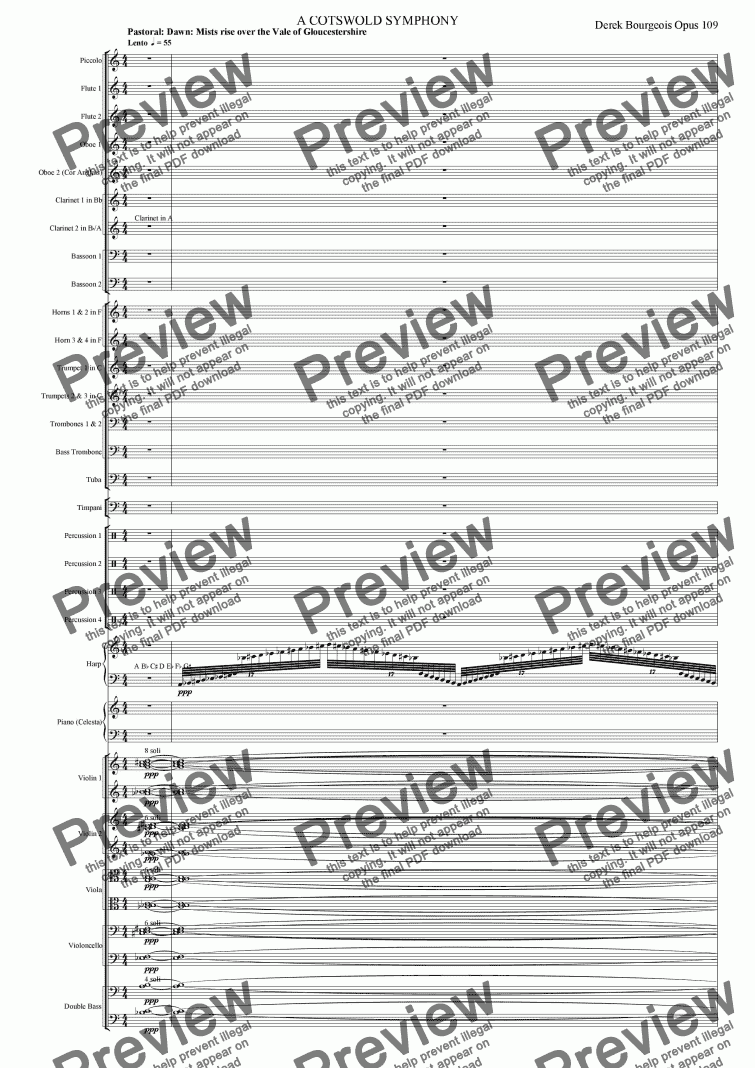 Symphony No 06 (A Cotswold Symphony)

Composer
Derek Bourgeois
Year of composition
1988
Lyricist
none
Difficulty
Difficult (Grades 7+)
Duration
30 minutes
Genre
Modern classical music
License details
For anything not permitted by the above licence then you should contact the publisher first to obtain permission.

My Sixth Symphony (Cotswold Symphony) was commissioned by the Stroud Festival and was first performed in Bristol in 1989.

The symphony plays continuously, but falls broadly into six sections:-

1. PASTORAL: DAWN: MISTS RISE OVER THE VALE OF GLOUCESTER Out of barely distinguishable shimmering sounds, a dawn chorus emerges which in turn gives way to a big tune, tentative at first, in the strings, in the unequivocal key of D major, a key which, for me, has always implied things green and pastoral. This short prelude will return from time to time in different guises and eventually provide the apotheosis of the work.

2. MAYPOLE The title speaks for itself. This is a swirling dance, which via a rustic central episode, builds up to a big climax in C major with the main dance tune in augmentation. The jollity suddenly turns sour and we are hurled into :-

3. THE IRON MARCH OF ROME There is nothing pastoral about this slow movement. It represents the inexorable advance of the Roman Empire across the countryside. An angular march tune builds relentlessly, growing ever louder, accompanied by long pedal points. The music is powerful, yet brutal. At the end a gradual accelerando leads us into the next section, still loud, but representing an entirely different mood.

4. CHURCH BELLS: "As sure as God’s in Gloucestershire" A quotation from Ivor Gurney, the Cotswolds’ most celebrated poet, heralds this short and transitory movement. A grand tintinabulation from Bells, Glockenspiel and Piano accompanies a noble theme in triple time, a reminder that the origins of the Dick Whittington legend lie here. As this subsides we are led gently back to the theme that started the symphony, but this time quiet and serene. A short pause leads us into :-

5. THE OLD CITY : GLOUCESTER This movement is complex, yet basically jaunty, and happy, building gradually into a march, but this time one far more characteristic of the English tradition. The word nobilmente (not a real Italian word, but one invented by Elgar) may spring to mind as the march unfolds. The movement is not so much a literal portrayal of Gurney’s words, but a capturing of the emotion they engendered in me. As the march subsides we move back into the material from the very beginning of the symphony.

6. EPILOGUE: PASTORAL The original tune reappears, and this time builds to a big and indulgent climax. At the very end there is a reference to the Iron March of Rome, but now in a glorious and unambiguous D major.

Reviews of Symphony No 06 (A Cotswold Symphony)