Return of the Doppelganger

By: Keith Otis Edwards
For: R & B band
This music is in your basket
View basket
Loading... 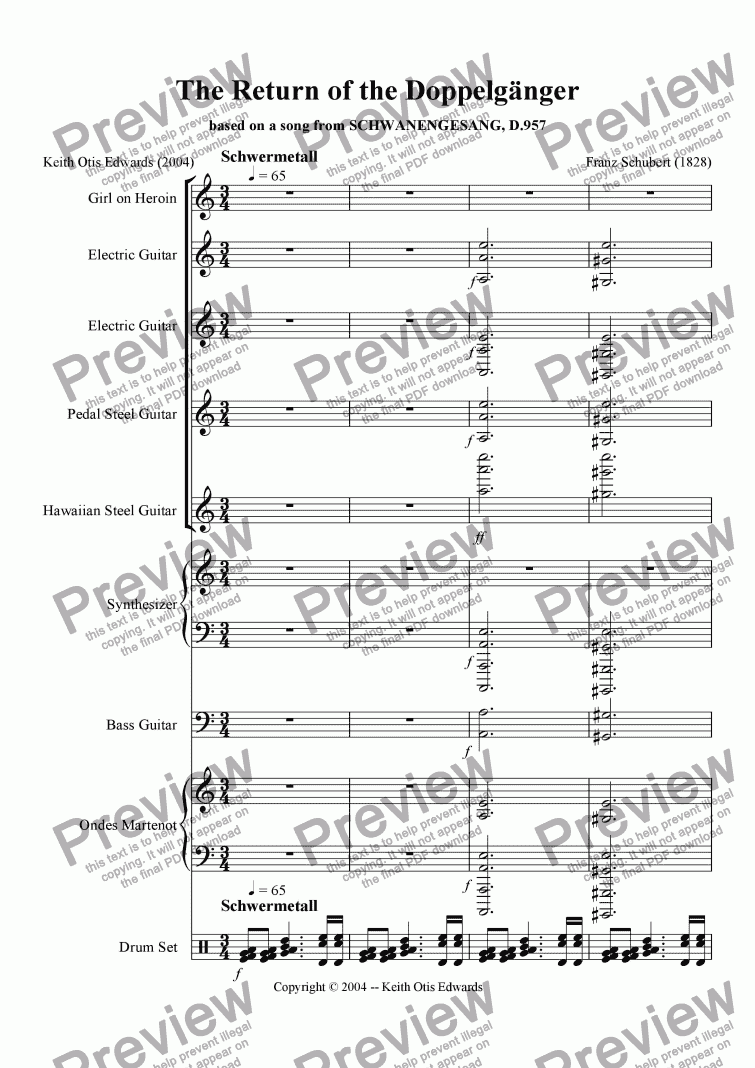 Return of the Doppelganger

By: Keith Otis Edwards
For: R & B band

Composer
Keith Otis Edwards
Year of composition
2004
Lyricist
none
Difficulty
Moderate (Grades 4-6)
Duration
6 minutes
Genre
Rock and Pop music
License details
For anything not permitted by the above licence then you should contact the publisher first to obtain permission.

I believe that I’ve browsed through the scores available at this site as much as anyone else has, and I’m struck by the fact that there seems to be a dearth of music in the subgenera known as Heavy Metal and Punk. There is a whole category named Pop/Rock, but most of what is on tap there is so bland that one’s grandmother would find it pleasant.

Why this should be, I don’t know. All manner of noisy sound patches are available in Sibelius, and none of the other music applications I own can match its ease of use and versatility. How can it be, then, that Sibelius Music has no music of adolescent bombast and rebellion, no sex, drugs and rock & roll?

There is but one man who can correct this situation! (Not me – I’m somewhat long in the tooth, so the strongest drug I keep is Metamucil.) I’m talking about the great-grandfather of punk, the man who gave the original meaning to the phrase "Live fast; Die young!" – freaky Franz Schubert!

I never cease to be amazed at what a versatile composer Schubert was. He wrote in the strict classical style of Haydn and Mozart; he wrote the most beautiful melodies ever; he wrote happy, bubbly music and poignant melodies of crushing melancholia. But it seems to me that Schubert was the originator of what might be called "freaky" music.

This is the third arrangement I’ve done of songs from the collection known as "Schwanengesang." As with "The City" (Die Stadt), "Der Doppelg?nger" has an eerie and disturbing quality that must have seemed insane when it was written. The song’s harmony is so unorthodox that I actually took some dissonance out for this arrangement.

Schubert may have been insane when he wrote these songs, and he was certainly aware of his impending death. However, his condition enabled him to see far into the musical future. It’s almost as if he wrote this music, with its simple but unorthodox chords, not for pianoforte, but for the electric guitar with a fuzz box.

To add authenticity, I wore a black T-shirt when I wrote this arrangement.

Theme from My Mid-Life Crisis

Reviews of Return of the Doppelganger