Sign in / Register
HomeInstrumentationsOrchestraLife and Afterlife: Four Elegies for Soprano and Orchestra

Life and Afterlife: Four Elegies for Soprano and Orchestra

By: David Stybr
For: Orchestra
This music is in your basket
View basket
Loading... 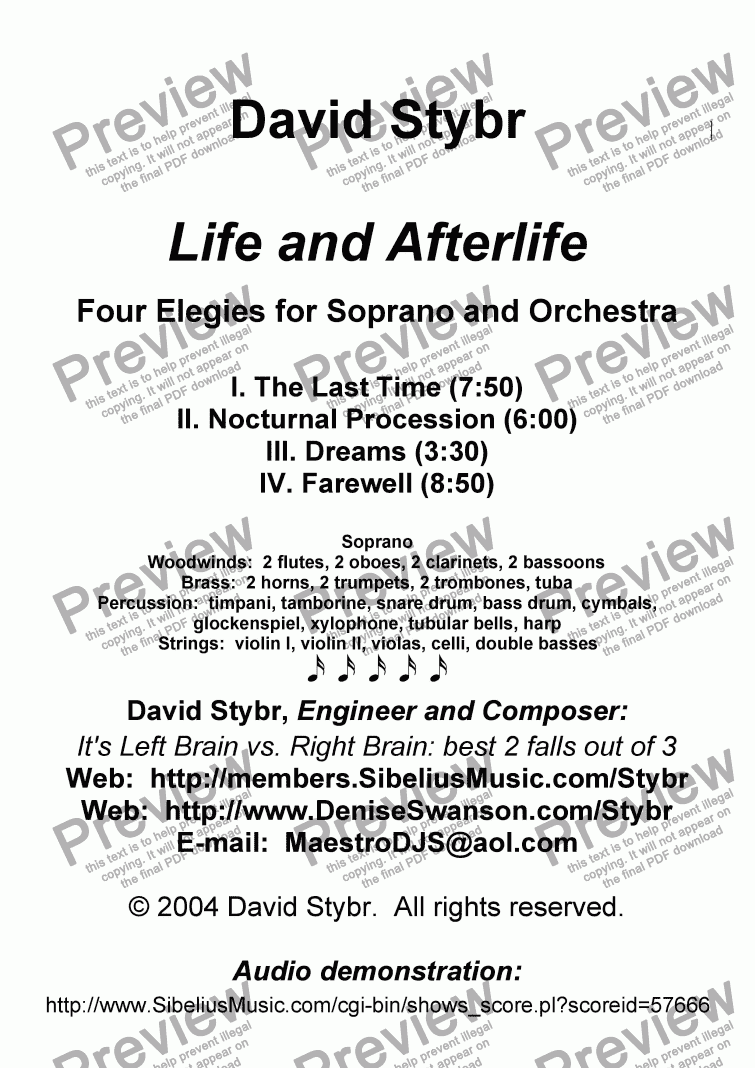 Life and Afterlife: Four Elegies for Soprano and Orchestra

By: David Stybr
For: Orchestra

Composer
David Stybr
Year of composition
2004
Lyricist
David Stybr
Difficulty
Difficult (Grades 7+)
Duration
27 minutes
Genre
Modern classical music
License details
For anything not permitted by the above licence then you should contact the publisher first to obtain permission.

Note: This score is at sounding pitch. Parts available upon request. Commentary by Left Brain vs. Right Brain.

I. The Last Time (7:50) - page 2 - LB: "My song cycle Life and Afterlife is a set of 4 Elegies for soprano and orchestra. The first movement 'The Last Time' is in G Minor, although the harmonies are ambiguous. It is based upon a single theme, phrases of which evolve into 2 further themes. Thus the music is in constant development. The cantabile main theme is presented quasi berceuse as an elegy to the loss of a loved one, above shifting harmonies which elude repose. The music is also permeated by a rhythmic motive, or rhythmotive as I call it, which manifested itself in January 2001 when my wife Denise & I were in Caracas, Venezuela. The rest of this music was composed during my travels for engineering projects, and completed in May 2001 in Washington, DC." RB: "In retrospect, it was fun to discover details which were in my subconscious. Very Right-Brain, eh? For example the exquisite horn countermelody, as the soprano repeats the main theme, evolved from my rhythmotive. I love the final pages, which skirt the G Major/Minor tonalities with chords based upon G-Bb-Eb-G."

II. Nocturnal Procession (6:00) - page 42 - RB: "Right away I see some bizarre patterns. Both your themes in the orchestral exposition have 5-bar phrases, and you begin almost all phrases with a rest on the 1st beat. Maybe you intended the music to seem seem hesitant and eerie. And can't you make up your mind whether the key is D Minor or E Minor? You even squeeze in traces of G Minor and A Minor." LB: "The tonalities are an upward struggle. The movement begins in D Minor, and then climbs a step into E Minor. Then it falls to D Minor again, climbs to E Minor, and climbs another whole step into F-Sharp Minor in the lyrical central R?verie section. It briefly reaches the relative major key of the piece, A Major, but falls down into its dominant minor: the home key of D Minor again. At the end, the music builds toward A Major again, but D Minor wins at the last second." RB: "As if those tonic gymnastics weren't enough, the real fun came in the central R?verie section, as I transformed Themes I & II into a contrapuntal accompaniment. Next I experimented with fragments of both themes, and they melded into a soaringly syncopated but lyrically passionate 11-bar melody in F-Sharp Minor!" LB: "This piece was completed in May 2002 in Washington, DC."

III. Dreams (3:30) - page 73 - RB: "This movement was completed in October 2004 in Lawrence, Kansas, but it seems a little rough around the edges. What gives?" LB: "The feeling of incompleteness was my attention, let me assure you. Life is replete with unfinished and unrealized dreams, but also much joy if we know how to embrace it. Although life sometimes seems overwhelming, love will triumph. Perhaps surprisingly, the soprano has a subsidiary r?le in this movement, and in one section she accompanies the orchestra rather than vice versa." RB: "For a movement entitled Dreams, it doesn't sound too dreamy. But these are the dreams of our life's aspirations, not of our sleep. Lots of times, our aspirations don't turn out as we'd hope they would. But life is more about the journey than the destination anyway." Left Brain: "To quote William Shakespeare: 'We are such stuff As dreams are made on, and our little life Is rounded with a sleep.' Mortal life is brief and moves in ways far more mysterious that we can imagine. Happiness can be attained only if we love Life unconditionally, and then we are rewarded with the Afterlife."

IV. Farewell (8:50) - page 88 - RB: "This 4th and final movement of my song cycle was composed in December 2001 on the Garden Island of Kauai, perhaps the most beautiful in the entire Aloha State of Hawaii. How's about you tell us its musical and geographical history?" LB: "My music is often trithematic, with an Exposition in which the 3rd theme generally emerges out of the previous 2. Development and growth continue throughout the entire work. For example, Theme II grows from an ascending phrase in Theme I. Most surprising in retrospect, Theme III is based on an inversion of the 1st phrase of Theme II, plus the 2nd phrase of Theme I. Originally my lyrical cantabile Theme III was slated for development, however it proved to be the result, not the source, of development. The central Development section deals with Theme I and the quasi-Baroque accompaniment of Theme III. Twice it also briefly recalls the main theme of the 1st movement of this song cycle. After a varied Recapitulation of themes, the work ends with a serene Coda." RB: "It's tonal music, but some phrases modulate into distant keys almost from bar to bar. After episodes in G Minor, B-Flat Major and B Minor, the piece shifts to D Major, but concludes in a radiant G Major. The woodwinds and brass are big players. Strings are important, but theirs is mostly a supporting r?le, with plenty of long resonant chords. The episodes for string quintet and wind quintet are nice touches."

Reviews of Life and Afterlife: Four Elegies for Soprano and Orchestra