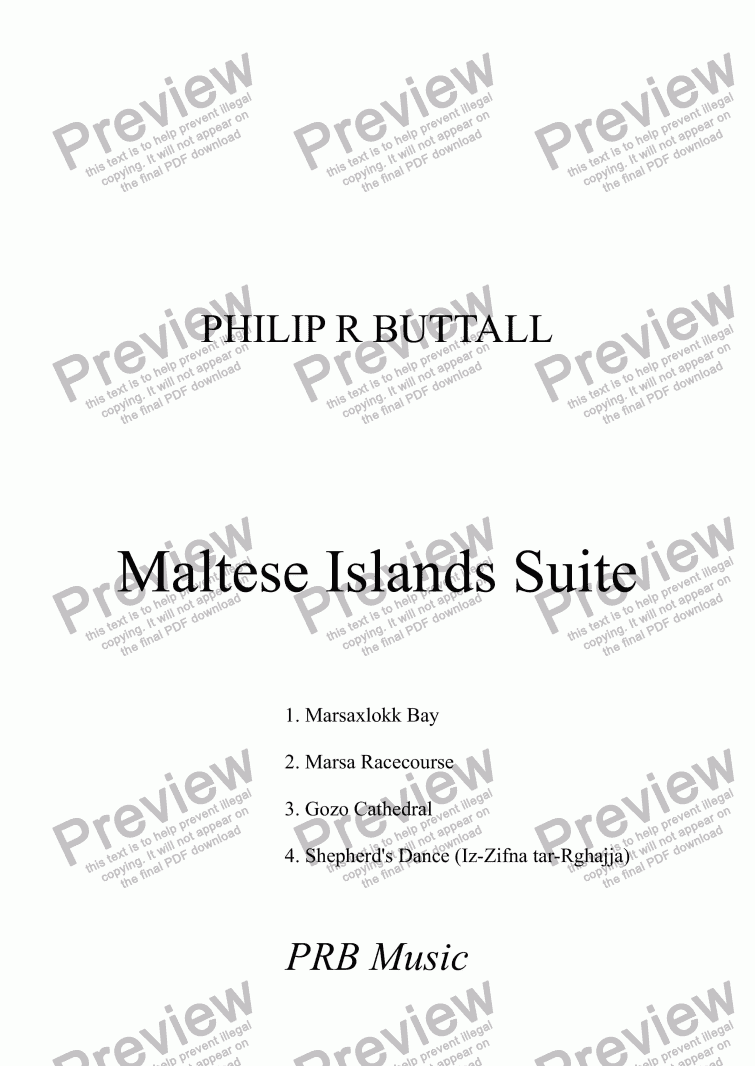 Composer
Philip R Buttall
Year of composition
2004
Lyricist
none
Publisher
PRB Music
Difficulty
Moderate (Grades 4-6)
Duration
8 minutes
Genre
Classical music
License details
For anything not permitted by the above licence then you should contact the publisher first to obtain permission.

Just before Christmas, 2004, I was delighted to receive an email from Sharon Gauci (see photo), originally of Senglea, Malta, who had seen the suite whilst browsing the former SibeliusMusic, and asked whether she could give the world premiere of the work on Malta itself! It goes without saying that I immediately got back to say how thrilled I would be, if this were to happen, and I’ve subsequently dedicated the Maltese Islands Suite to Sharon (or ’Shar’, to her friends!). Sharon has since moved to the UK, where she is now teaching music in the home counties area.

This opens the Maltese Islands Suite. It sets a serene and calm picture, with some slightly exotic ‘Mediterranean’ harmonies, to create a leisurely picture of this Southern bay in the main island, and where most of the fish is landed. There is some rhythmic freedom in the right-hand writing, over a lilting background in 6/8.

The second piece of the Maltese Islands Suite presents a picture of the island best-known racecourse, a short distance from the capital, Valletta, in the town of Marsa. The music hopefully suggests the start of the race, the gallop as the horses jockey for position – here using essentially a chromatically rising progression, where some quite banal tune snippets are heard, before the final straight. Here a gradual stringendo raises the excitement as the horses nudge ahead to win the race outright! Both hands are involved in the melody, the left hand in particular, as well as sharing some passages together. Dynamic balance and neat, clear articulation are the order of the day here.

Legato playing is essential here in the third piece from the suite, as the soundscapes sets to capture a picture of the cathedral on the smaller island of Gozo. Some ornamentation is used in the melodic line, and a gently rippling 4/4, with the quavers divided 3+3+2, helps present the overall calm and significance of the cathedral in an islands with very strong religious beliefs.

The opening short improvisatory section – and the piece’s subtitle – should give a good idea that while Malta is a Mediterranean island not far from Sicily, its origins, and indeed language, both spoken and musical, have quite a lot in common with Arabic. The dance section again uses the 3+3+2 rhythm pattern, but now in an urgent fashion, exotic touches added by the melodic use of the harmonic minor scale, with its decidedly non-Western interval of the augmented second! Hopefully it rounds the Maltese Islands Suite off with some aplomb!

Each piece is also available separately under its individual title.