By: Rossini
For: Large mixed ensemble
This music is in your basket
View basket
Loading... 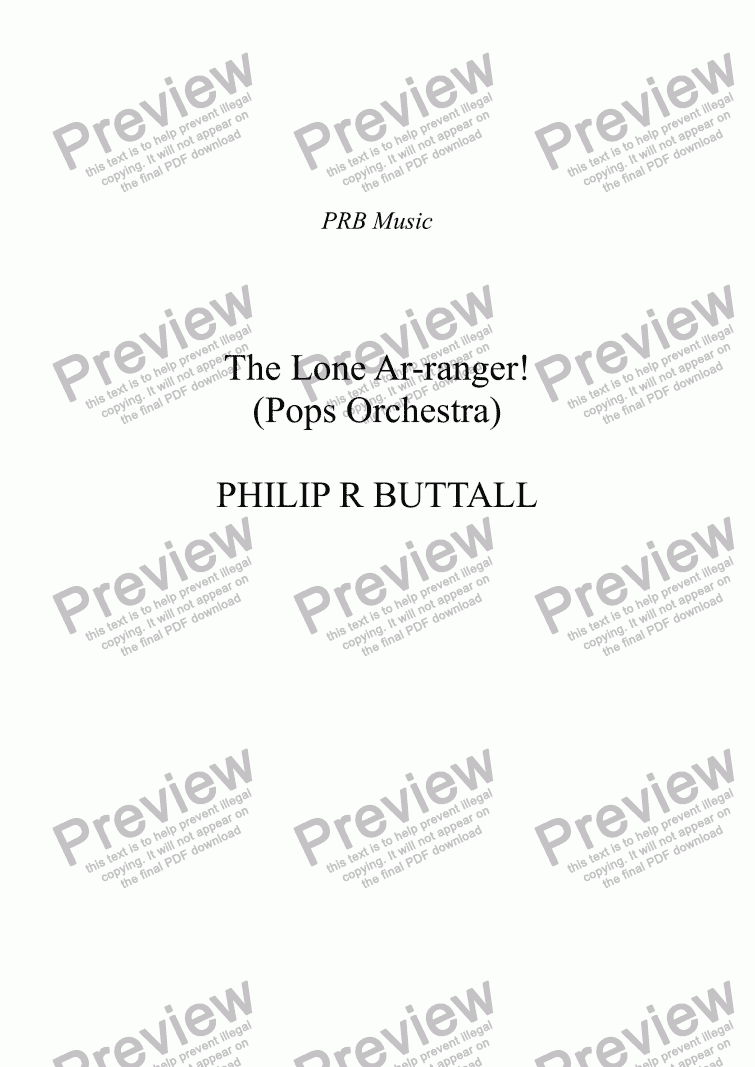 By: Rossini
For: Large mixed ensemble

Composer
Rossini
Year of composition
2004
Arranger
Philip R Buttall
Lyricist
none
Publisher
PRB Music
Difficulty
Difficult (Grades 7+)
Duration
3 minutes
Genre
Rock and Pop music
License details
For anything not permitted by the above licence then you should contact the publisher first to obtain permission.

The Lone Ar-ranger!, in all its various guises, has proved to be quite popular, and has been heard in a number of different forms around the world. I have been fortunate that some of these versions and arrangements have now been published in hard copy, and whenever they have appeared in print, I have, of necessity, removed them from SibeliusMusic.
Earlier this year, I was contacted by Ron Armstrong, MD of the Southampton Pops Orchestra, here in the UK, to ask whether I had thought of making an arrangement for their sort of set-up, essentially a full wind band + strings, and with some extras like keyboard, rhythm and bass guitars. To do this, I have basically combined the wind and string version, but kept the wind key (concert F), as this seemed better all round. The addition of a keyboard has allowed me to add in some extra instruments, or rather their sounds, where appropriate, like banjo, harpsichord and celeste.
The Southampton Pops Orchestra has just released a brand new CD, Celebrations, which includes The Lone Ar-ranger! For further details, and to order the CD, please click here.
Ron writes:

'Celebrations' is an enlightening CD, featuring some of the best-loved music from the past 50 years, as well as some brand new works. Titles on this CD include 'Music From The Gladiator' by Hans Zimmer, 'It Was A Very Good Year' by Frank Sinatra, Philip R Buttall's 'The Lone Ar-Ranger', and 'Lord Of The Rings Symphony No. 1', with music featured in the epic film trilogy. The CD is guaranteed to make you sit up and listen, with an exciting and invigorating performance from the orchestra.
The attached MP3 features the Southampton Pops Orchestra playing The Lone Ar-ranger! LIVE on their recent CD - details above! The orchestra will be featuring The Lone Ar-ranger! on their USA tour, August 2005.
Following a number of requests worldwide, I have now uploaded a special non-playing score, which lists, and identifies all the tune fragments used in The Lone Ar-ranger!
Click [[http://www.sibeliusmusic.com/cgi-bin/show_score.pl?scoreid=136578|here]] for further information.