By: Giuseppe Verdi
For: String quartet
This music is in your basket
View basket
Loading... 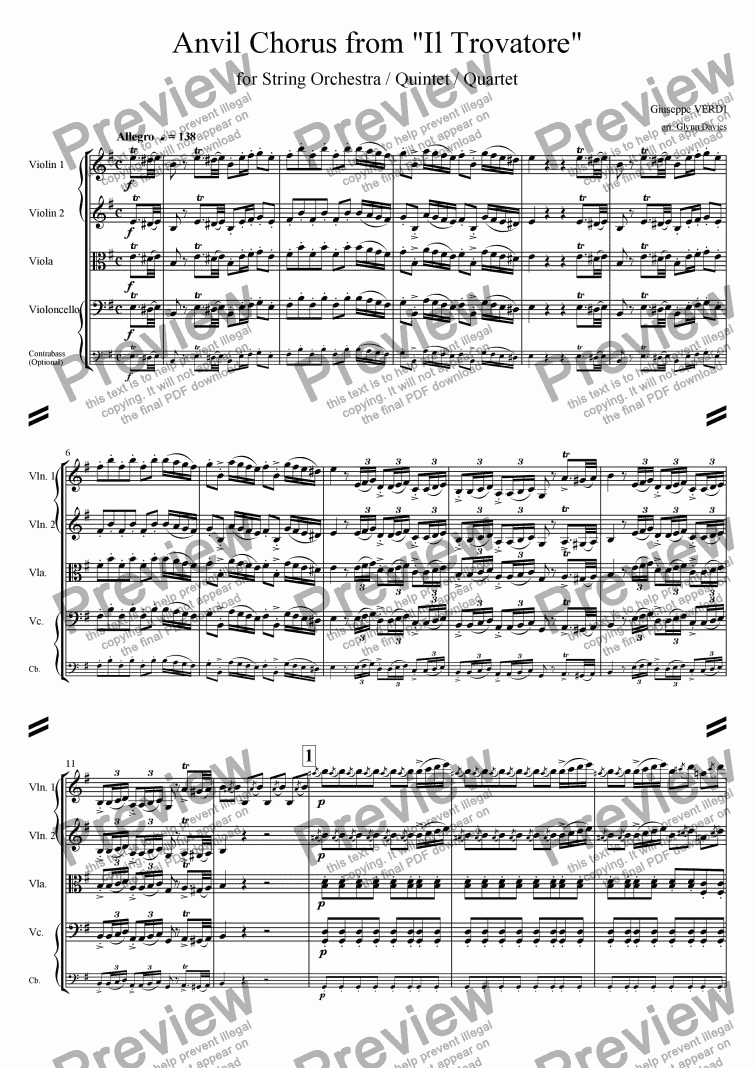 By: Giuseppe Verdi
For: String quartet

Composer
Giuseppe Verdi
Year of composition
1853
Arranger
Glynn Davies
Difficulty
Difficult (Grades 7+)
Duration
3 minutes
Genre
Classical music
License details
For anything not permitted by the above licence then you should contact the publisher first to obtain permission.

The second of the three great middle period operas that solidified Verdi's fame, Il Trovatore is the work that is most based in the traditions of the first half of the nineteenth century. Based on a play by Gutierrez, the plot is filled with the twists and unlikely coincidences that, over the years, have made the opera the butt of many jokes. However, Verdi was stirred to the height of his inspiration by this work, and from its premiere it was an even greater success than its predecessor, Rigoletto.

The original text was by one of the composer's favorite librettists Salvatore Cammarano, but Cammarano died soon after the initial draft was completed, forcing Verdi to turn to Leone Bardare for revisions. Verdi initially contemplated naming the opera after its Gypsy character, Azucena, but in the end the tenor ruled the day.

In 1856, Verdi was commissioned to revise the opera slightly for a French version at the Paris Op�ra; he added a ballet to the third act, rewrote the ending of the final scene, and made other minor revisions. None of these revisions have been incorporated into the standard performance version of the opera.

The importance of Il Trovatore lies in its music; it displays some of the most ingratiating melodies Verdi ever wrote. It has been said that in order to mount a successful performance of this opera, all you need (!) are the four greatest Verdi voices available. From the soaring phrases of Leonora's opening aria to the martial excitement of Manrico's "Di quella pira," all of the conventional operatic forms are used to give the singers a chance to shine. Only Azucena does not have the traditional two-part aria, but she has some of the most memorable solos and duets in the entire opera. From her entrance with the drama of "Stride la vampa" to the tenderness of her Act IV duet with Manrico, she displays a full range of emotion. Di Luna, the baritone villain, is more one dimensional. The role of Manrico is one of the most difficult that Verdi wrote; he needs the grace of a lyric tenor for "Ah si, ben mio" and a full dramatic tenor sound for the following "Di quella pira" (which contains two unwritten high Cs that add considerably to its difficulty). Most tenors find it safer to have this aria transposed down in performance and some even do this on recordings.

Verdi's Il Trovatore is among the last of the "stand and sing" operas: those that give their best effect when well sung, regardless of dramatic portrayals. With its wealth of great music, Il Trovatore will always be an audience favorite, while the critics will complain about its lack of subtlety.

This arrangement is for standard string quartet, with optional bass for use with string orchestra.