By: Michael Morse
For: Solo Alto Saxophone + piano
This music is in your basket
View basket
Loading... 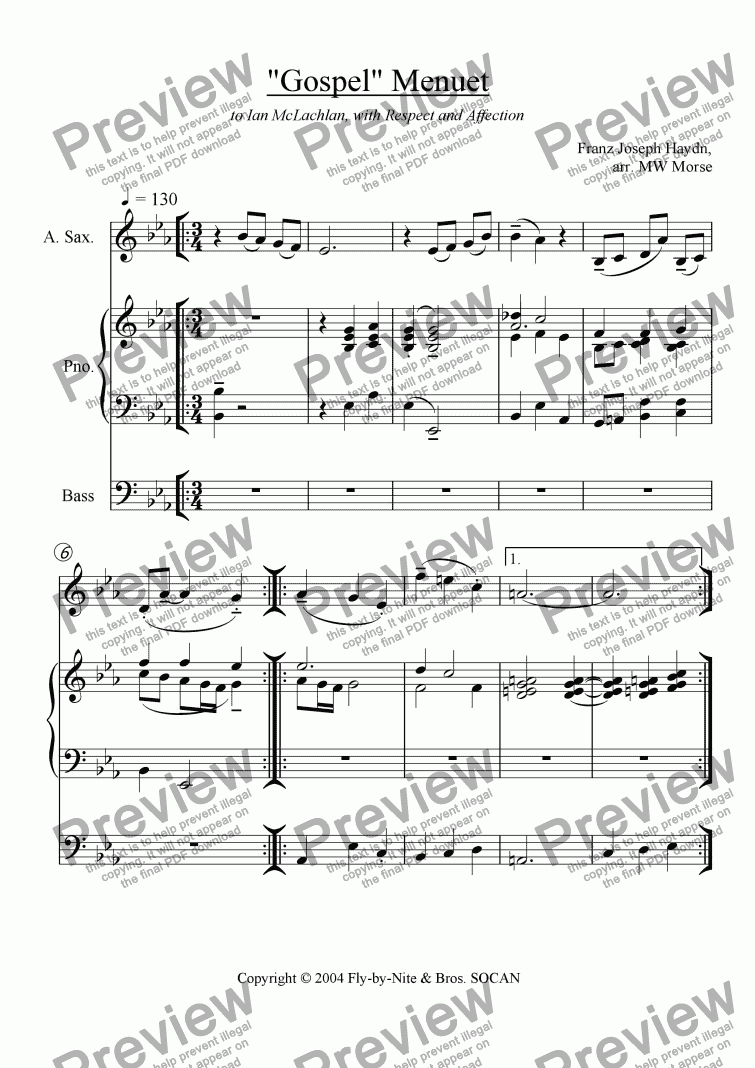 Composer
Michael Morse
Publisher
Fly-bi-Nite & Bros.
Difficulty
Easy (Grades 1-3)
Duration
2 minutes
Genre
Classical music
License details
For anything not permitted by the above licence then you should contact the publisher first to obtain permission.

This is the first publication of a menuet by the revered Classical composer Joseph Haydn (1809-1732). It presents some interesting light on the life and music of the composer.

The manuscript was discovered in the effects of theologian & rabble-rouser Gottfried Kleinschwanz (1746-1791). Kleinschwanz preached Biblical Literalism and abstinence-only sex education up and down the Austro-Hungarian Empire, until chased out in 1785. He took refuge in London, where the Great Revival was about to begin. In the summer of 1788, Haydn took his customary vacation from Court duties for Prince Esterhazy, and went to London to arrange for some orchestral concerts. At the salon of Lord & Lady Bracknell, he encountered the charismatic Kleinschwanz. Although there is no evidence that this life-long devout Catholic ever converted to Protestantism, it is apparent from this short piece that he must have considered such a move. With some notable exceptions, discussed below, the music is vintage Haydn.

First and foremost, the frequent "Amen" cadences suggest that Kleinschwanz introduced Haydn to some of the hymns and psalms popular among Protestants, especially in the English-speaking world. The modal chords on pedal points (in the Trio and elsewhere) are most unusual, but would have been familiar to Haydn from the rustic folk music of Protestant peasants capering about the grounds of Esterhaz. Unusual, too, is Haydn's decision to forego recapitulation, in favour of a brief coda. The lead instrument here also calls for comment. The manuscript lists the lead voice as "Saxo Grammaticus corno rusticus"–a now-obsolete ancestor of the alto saxophone. The jazzy pizzicato bass line shows Haydn as the forerunner of the musical future.

The present edition became possible after the manuscript was discovered in London in 2003. Kleinschwanz returned to Vienna in 1790, where his renewed doctrinal obstreperousness led Joseph II. to solve the problem definitively by having him drawn and quartered. After turning up in an attic, his affects were offered in a garage sale. The purchaser of the manuscript saw the jazzy style of the music, brought it to Ronnie Scott's club, where it eventually made its way to the present editor. I have of course endeavoured to cleave to the highest standards of contemporary scholarship.

Fortunately, this has grown considerably easier, since the cutting edge of musicology has recognized the fundamental bankruptcy of disinterested objectivity. I have discharged my responsibilities accordingly.

[for my friend Ian McLachlan]