By: Richard Osborne
For: Voice + keyboard
This music is in your basket
View basket
Loading... 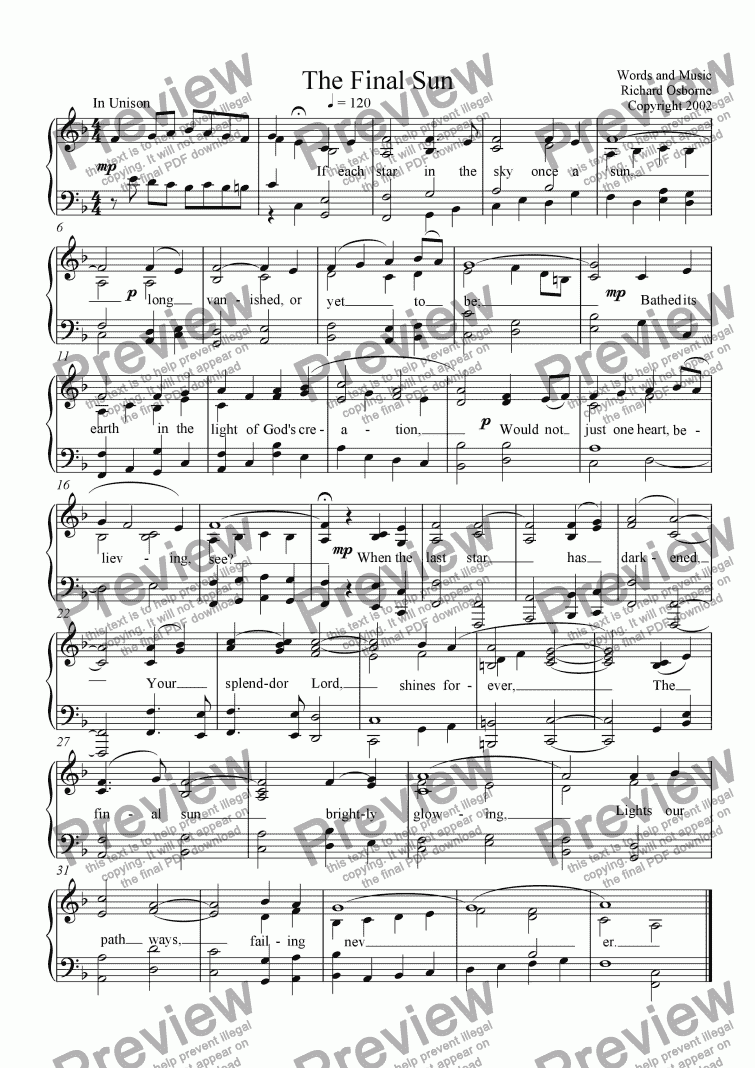 By: Richard Osborne
For: Voice + keyboard

Composer
Richard Osborne
Year of composition
2002
Lyricist
Richard Osborne
Publisher
Osborne Music
Difficulty
Moderate (Grades 4-6)
Duration
1 minute
Genre
Other
License details
For anything not permitted by the above licence then you should contact the publisher first to obtain permission.

The goal of ?Final Sun? was to demonstrate to myself that there could be singable music that spanned that very wide abyss between ?traditional music? which I love, and ?contemporary music?, the musical value of which I am still struggling.

Even with simple vocal scores, words and music do not always fall into place. Such was the case here. The music was composed nearly 3 years ago, as two instrumentals, my Canakins 1 and 2. The words only recently began to unfold, inspired from a hymn I regularly sang in the mid 80s:

?Who can tell what other cradle, high above the milky way. Still may rock the king of heaven, on another Christmas day?

This 1961 hymn, ?Every Star Shall Sing a Carol? was by Sydney Carter, a British songwriter who died last March. While the words are definitely out of the mainstream of Protestant Christianity, Mr Carter elaborated on his own faith in his poem ?Interview?:

"So what do you believe in? Nothing fixed or final, all the while I travel a miracle. I doubt, and yet I walk upon the water"

?at least 1 million of the 100 billion stars in our Milky Way galaxy have planets which have developed advanced intelligent civilizations. Now, if we consider the astronomical fact that there are over 10 billion galaxies in the universe, each holding at least another million solar systems, one may start to think that we may not be the only life in the universe. ?

In tribute to both men, I offer ?The Final Sun?:

If each star in the sky once a sun, Long vanished, or yet to be; Bathed its earth in the light of God?s creation, Would not just one heart, believing, see?

Note From Richard - Although I offer this work as original, it is subject to revisions of text and notation for clarity, and accuracy.

Reviews of The Final Sun