Sign in / Register
HomeInstrumentationsChoirDomine ne in furore (Penitential Psalm I)

By: Andrea Gabrieli
For: Choir
This music is in your basket
View basket
Loading... 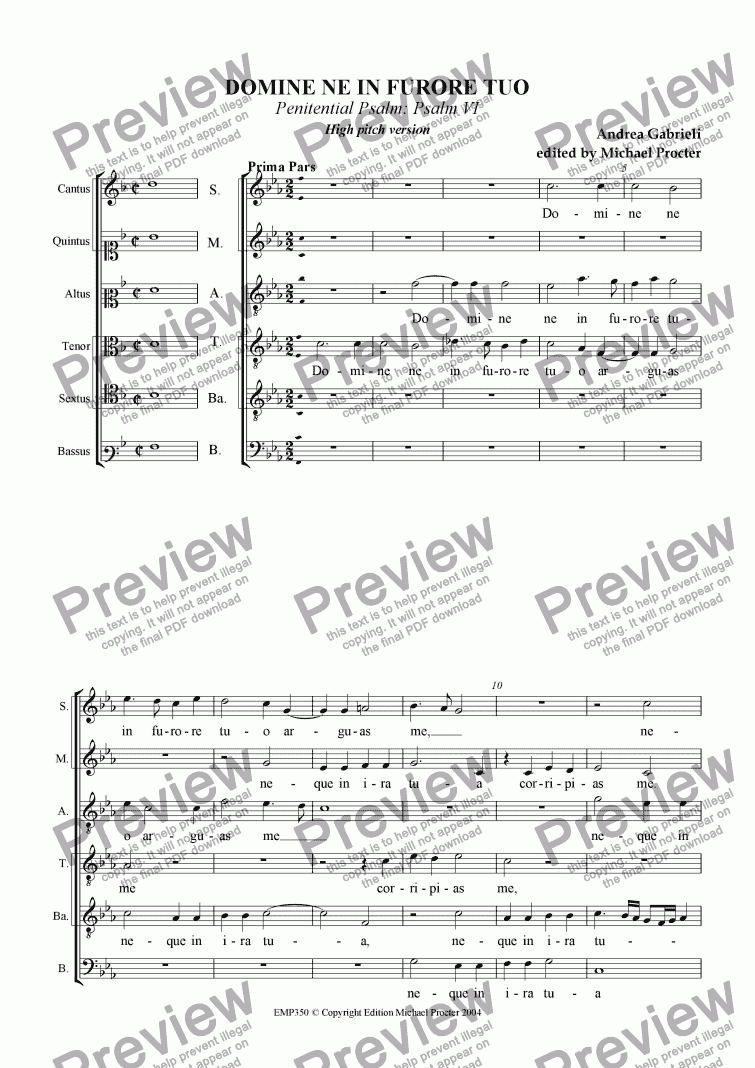 By: Andrea Gabrieli
For: Choir

Composer
Andrea Gabrieli
Arranger
Michael Procter
Lyricist
liturgical
Publisher
Edition Michael Procter
Difficulty
Difficult (Grades 7+)
Duration
7 minutes
Genre
Other
License details
For anything not permitted by the above licence then you should contact the publisher first to obtain permission.

This setting of the first Penitential Psalm (Psalm 6) is taken from Gabrieli's set of all seven psalms, published in 1583. The collection has attracted considerable attention (if few performances) because of its apparently specific intention of vocal and/or instrumental performance. This intention is expressed both in the title page of the collection ('tum omnis generis instrumentorum, tum ad vocis modulationem accommodati…'), and in the composer's dedication to Pope Gregory XIII. Neither statement should however be taken as implying the use of instruments in liturgical performance: rather, the composer seems to be encouraging the use of these compositions either for general devotional use or as sacred chamber music for private consumption. There can be little doubt that the use of these settings in liturgical forms, especially in Lent, would be subject to the exclusion of instruments. Gabrieli's consistent use of the Gallican Psalter, rather than the Roman as still used in St. Mark's at his time, lends credence to the supposition that the works were intended for a wider consumption than in the liturgy. In the case of the present Psalm - the first penitential psalm, Ps. 6 - the opening text is itself different in the Roman version which Gabrieli would have been obliged to set for use in his own job: the opening line is 'Domine ne in ira tua…'

Whatever the interpretation of the composer's remarks about instrumental participation, the seven Psalms remain one of his greatest, and indeed most substantial achievements. The comparison with Lassus is inevitable, and in the present work the quotation at 'Laboravi' (also quoted, of course, by Ferrabosco and indirectly (?) by Byrd) makes clear Gabrieli's familiarity with his friend's magnificent setting. Gabrieli's is no less fine, although very different. The concise, almost word-for-word writing of Lassus gives way here to a broad and massive compositional style in which the voices are used almost instrumentally, being added to the texture for certain phrases of the text with apparent disregard for the continuity of text within each voice - an aspect of Gabrieli's style to be observed elsewhere in his large-scale works. A quasi-antiphonal style, alternating in particular higher and lower groupings of voices, adds to the monumental affect. The length of the work is, surprisingly, considerably less than in Lassus' setting, 178 bars compared to 253 plus Gloria (Gabrieli omits the Gloria in all seven Psalms, encouraging the theory that the settings are non-liturgical in intention). Gabrieli's scoring, for 6 voices, is also more massive than Lassus' 5 parts, and has none of the reduced-voice sections which characterise the more virtuoso style of Lassus.

The 6 voices indicated by the original clefs - a high clef combination which must of course be transposed - would appear to be, as suggested in this edition, soprano, mezzo, alto, tenor, baritone, bass. The ideal pitch would depend on the voices concerned, but in principle should be a fourth below the printed pitch, as given here. The setting was of course conceived for male voices, the soprano part being taken by falsettists. The probable scoring would then be soprano, alto, higher and lower tenor, higher and lower bass (the latter extending occasionally to low D, in itself nothing unusual.) The edition may be transposed or is available a third higher.

Reviews of Domine ne in furore (Penitential Psalm I)

Sorry, there's no reviews of this score yet. Please .
In order to submit this score to ScoreExchange.com Michael Procter has declared that they own the copyright to this work in its entirety or that they have been granted permission from the copyright holder to use their work. If you believe that this score should be not available here because it infringes your or someone elses copyright, please report this score using the copyright abuse form.