By: Keith Terrett
For: Choir
This music is in your basket
View basket
Loading... 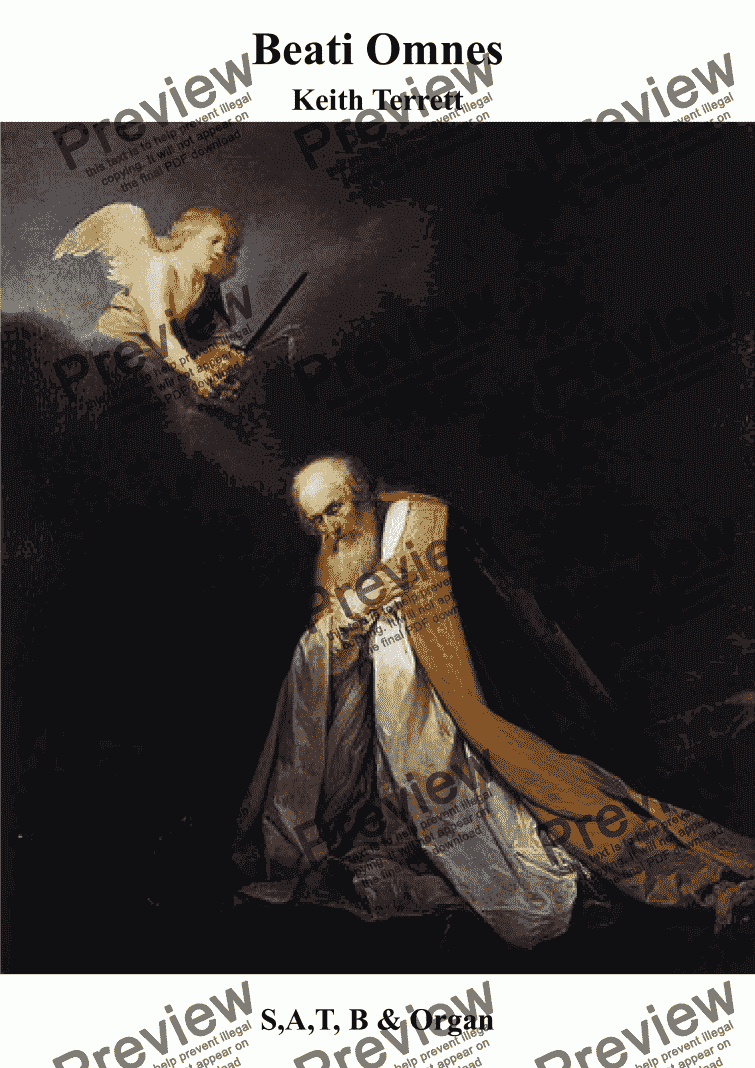 By: Keith Terrett
For: Choir

Composer
Keith Terrett
Year of composition
1987
Publisher
Music for all Occasions
Difficulty
Moderate (Grades 4-6)
Duration
1 minute
Genre
Classical music
License details
For anything not permitted by the above licence then you should contact the publisher first to obtain permission.

This is a chant(Psalm 128, taken from 'The Psalms of David'),for S.A.T. & Bass; with an optional Organ part to aid rehearsal if desired.

For musicians who do not know chants, one of the best collections is the one used at Westminster Abbey, edited by William McKie, with over 318 chants for all occasions by various composers such as Henry Purcell, W.H. Monk, Samuel Wesley and Sir H.H. Parry, ranging from chants for morning, evening, jubilate and benedictus.

This will be available for instrumental groups shortly, and is an excellent way of teaching ensemble playing in four part harmony, and also for teaching potential conductors how to direct a chant!

Other uses of chant: Chants are used in a variety of settings from ritual to recreation. Supporters or players in sports contests may use them (see football chant). Warriors in ancient times would chant a battle cry. They are also used on protests, and are widely adapted with only a few words changed between topic. Chants are the main form of communication used by Auctioneers in the auction industry, in what is known as the auction chant or bid calling.

Recently, musical genres such as Hardcore, Grindcore, and other aggressive forms of music have adopted this concept. Many times during a 'breakdown' (the segment of the song where the time signature is half counted or significantly slowed in some way). The singer will recite a chant, the object of this is to get everyone involved and create a feeling of passion throughout the room causing overall reaction to the music, including pits, to be more intense. Rap music, which is primarily spoken rather than sung, depends heavily on a highly rhythmic delivery with many elements of chant, particularly in chorus sections.

Chanting is also popular in film and Video Game scores, such as the The Lord of the Rings film trilogy by Howard Shore, Star Wars: Episode I: The Phantom Menace by John Williams , Ghost in the Shell by Kenji Kawai or Man vs Godzilla by Akira Ifukube, or in the case of games, the Halo (series) of First Person Shooters by Martin O'Donnell and Michael Salvatori.

Chant music has also been proven to be an effective tool for helping young children (ages 6 months to 6 years)rest and nap. The steady even tones, the even pace and the fact that the words are in another language not known to the children all help to calm their bodies and their minds and allows them to easily rest comfortably assuring them the rest their growing bodies need.

BLESSED are all they that fear the Lord : and walk in his ways. 2 For thou shalt eat the labours of thine hands : O well is thee, and happy shalt thou be. 3 Thy wife shall be as the fruitful vine : upon the walls of thine house. 4 Thy children like the olive-branches : round about thy table. 5 Lo, thus shall the man be blessed : that feareth the Lord. 6 The Lord from out of Sion shall so bless thee : that thou shalt see Jerusalem in prosperity all thy life long. 7 Yea, that thou shalt see thy children’s children : and peace upon Israel.