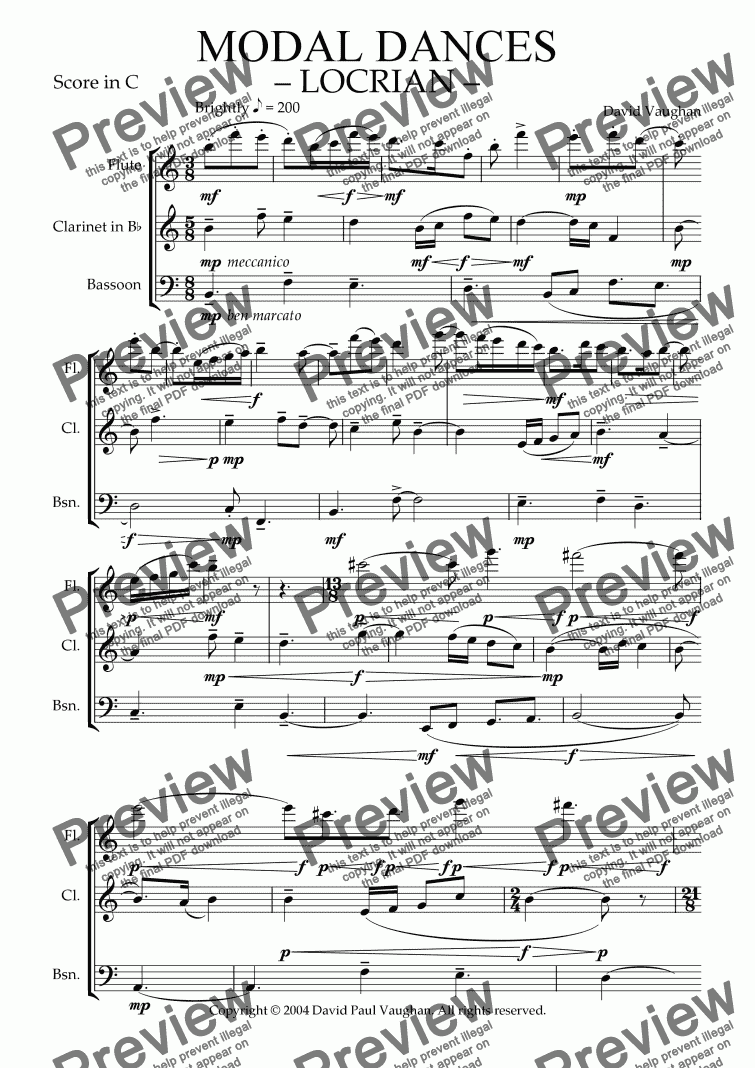 Composer
David Vaughan
Year of composition
2004
Lyricist
none
Difficulty
Difficult (Grades 7+)
Duration
3 minutes
Genre
Classical music and Modern classical music
License details
For anything not permitted by the above licence then you should contact the publisher first to obtain permission.

The Modal Dances can be considered 'a collection of seven short pieces for wind trio', and as such any of the movements, or indeed groups of movements, may be used as independent interludes or short suits unto themselves.

Beginning with the idea of this mode being 'of the devil', according to Christian authorities in the Middle Ages, I intended this movement to be a kind of aggressive devil's dance, however, true to the rebelliousness of the mythological character depicted, it soon moved beyond these restrictions into a short piece that dictated itself. Staying with the idea of golden ratios, which are very attractive to me and I find fascinating, I decided to use them heavily throughout to compose this piece, but in different ways to ones used in Aeolian. The opening dance-like figure of the flute was the source used to create a kind of metrical canon for the other parts, but instead of having simple relationships between the parts, I used golden relationships which made it more interesting. The three-eight version of the flute became a five-eight version on the clarinet, and an eight-eight version on the bassoon, when it then became a thirteen-eight version on the flute, and so on. Due to the fact that these relationships are not symmetrical, I worked out the golden proportions of the time signatures and determined where stress-points should occur, and how rhythms should be translated. The simple three stress-points in the three-eight become beats one, three and four in the five-eight, and one, four and six in the eight-eight. After the first section ends I then moved into territory that borrows from techniques discovered and used by Danish composer Per Nørgård. His infinity series was the basis of the second section, with the form of the section dictated by a graph of golden ratio. Each bar (the length of which is a number in the Fibonacci series, e.g. 1,2,3,5,8) is then split in two, with rounded-off versions of the golden ratio (in the case of 8/8, three and five beats, in the case of 3/8, one and two beats). At any point in time one instrument is carrying the melody determined by the infinity series, with the other instruments playing specific notes from the series on different 'wavelengths'. This section then leads into the penultimate section, which uses phasing techniques, with the length of each element being a number from the Fibonacci series, in this case three, five and eight. This then leads back into the opening section of the piece as a finale. I am extremely happy with how well this final movement turned out –- it has an aggressive edge, but I soon found it addictive to listen to.

Darkness, Derivations, The Storm, III. The Cyclone, The Storm, II. The Ancient Forest, Dreams of the Ethers, The Storm, I. Before the Storm, Wednesday, Monday, Dreamhunter, Brian, Longing For, Memories of Malridon, Modal Dances, II. Dorian, Modal Dances, I. Ionian, Marshland, When Loneliness Comes, All Through the Night, Lonely Street, Dance for Apollo, Without Hope and Ripples in the Dark