In The Bleak Mid-Winter

By: Gustav T. Holst
For: String quartet
This music is in your basket
View basket
Loading... 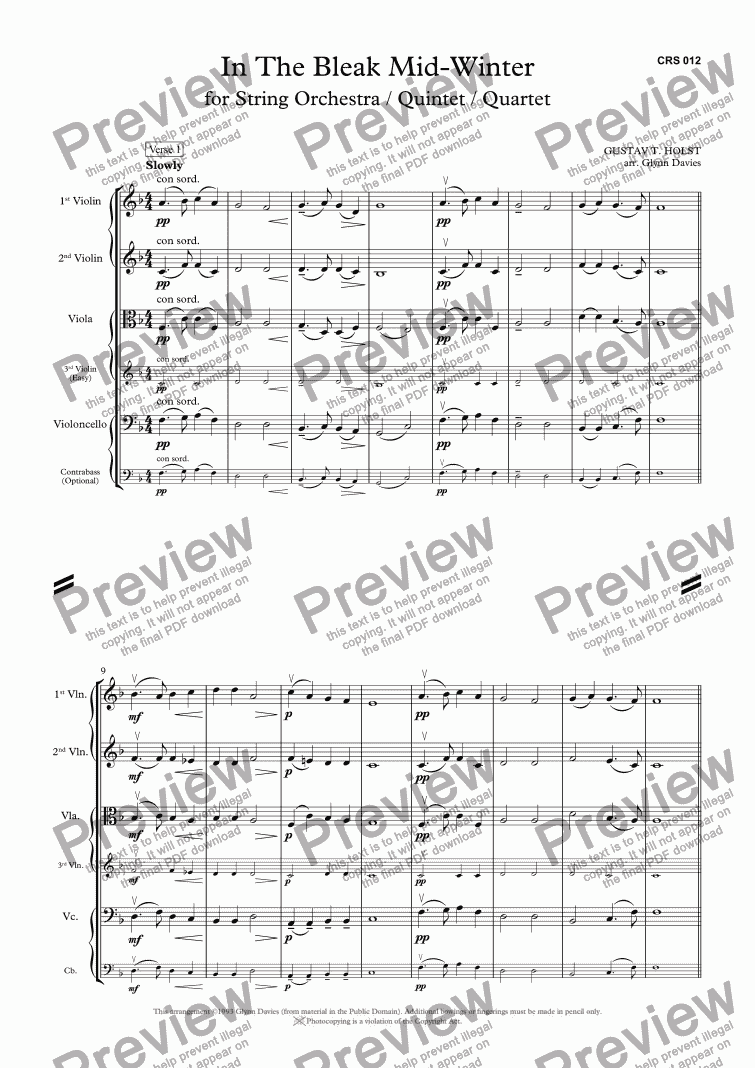 In The Bleak Mid-Winter

Composer
Gustav T. Holst
Year of composition
1905
Arranger
Glynn Davies
Difficulty
Moderate (Grades 4-6)
Duration
2 minutes
Genre
Classical music
License details
For anything not permitted by the above licence then you should contact the publisher first to obtain permission.

Gustav Holst's "In the Bleak Midwinter" (1905) is a hymn specifically composed for congregational singing. Throughout his career Holst advocated writing music for the masses, as well as for the musically astute; therefore, much of the composer's repertoire ? including hymns, music for military band, and numerous songs ? was written with the amateur musician in mind. Many of these "lighter" compositions have stood the test of time because even though they are made of relatively simple stuff, they still bear the mark of Holst's careful and loving craftsmanship.

Around the beginning of 1905, a group of clergymen created a committee with the purpose of updating the hymn book called Hymns Ancient and Modern. This hymnal was considered to be old-fashioned, so new hymns were to be added. Percy Dearmer, a fellow clergyman and professor of Ecclesiastical Art at King's College in London, was named chairman of this committee. Ralph Vaughan Williams was decided upon to be the music editor, whose task was to make all final decisions on which hymns would be added. Vaughan Williams was skeptical of this duty, but accepted the post upon being promised that the work required would only take two months. In actuality, the project wasn't completed until two years later. With Holst aiding in the editing process, Vaughan Williams looked to include "the finest hymn tunes in the world." Folk tunes and traditional songs would be added, as well as songs by earlier English composers, such as Thomas Tallis. English composers of the time were invited by Vaughan Williams to create new hymns for the updated hymnal. It was soon evident that the addendum would be comparable in size to the original hymnal, so it was decided that an entirely new hymn book would be produced, under the title of The English Hymnal. Holst composed three original hymns based on previously gathered folk tunes for this new volume. In the Bleak Midwinter is set to text by Christina Rossetti and the folk tune used is known as the "Crantham," named after the town in which it was collected. It is believed that Holst actually composed the hymn while staying in this village for a short amount of time, and a cottage in the village was eventually named Midwinter Cottage.

Another new hymnal was created in the mid-1920s, entitled Songs of Praise. Once again Dearmer and Vaughan Williams teamed up to manage the hymnal's creation. In the Bleak Midwinter was also included in this new hymn book, as well as a number of other Holst hymns. The hymn was one of Holst's most popular compositions during his lifetime and remains to be well known and often performed.

This arrangement is for standard string quartet, with an optional bginner's third violin part, and bass part for use with string orchestra.

Reviews of In The Bleak Mid-Winter