Sign in / Register
HomeInstrumentationsString quartetWater Music Suite No.3 in G

Water Music Suite No.3 in G 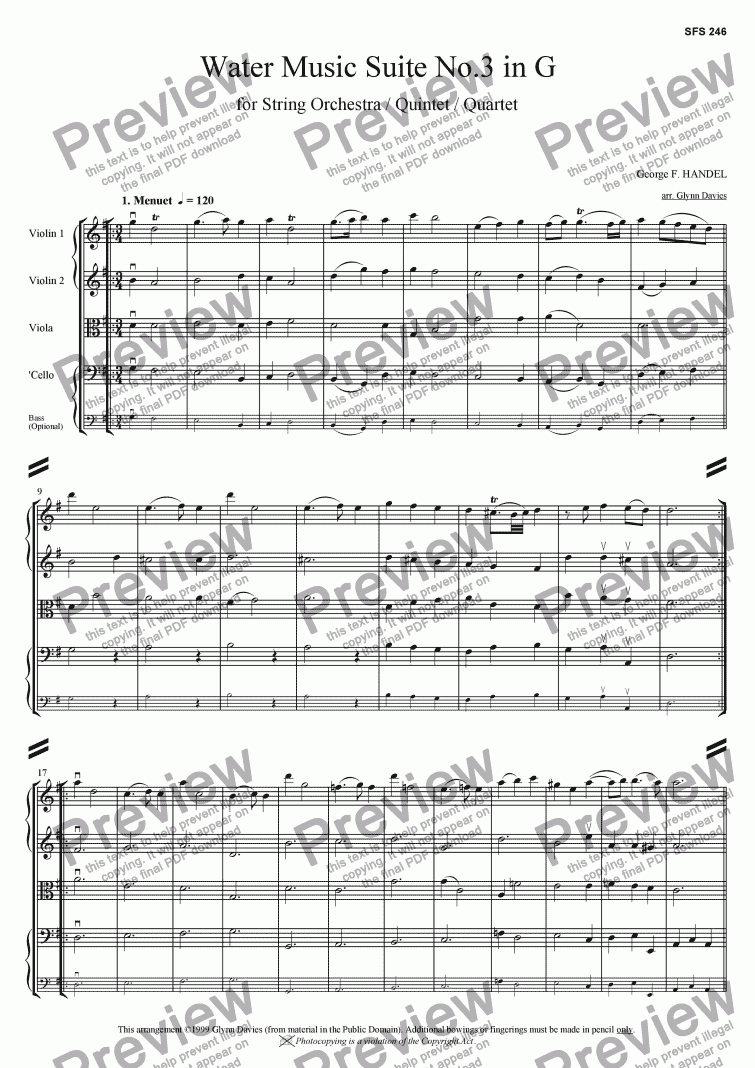 Water Music Suite No.3 in G

Composer
George F. Handel
Year of composition
1717
Arranger
Glynn Davies
Difficulty
Moderate (Grades 4-6)
Duration
10 minutes
Genre
Classical music
License details
For anything not permitted by the above licence then you should contact the publisher first to obtain permission.

There is a highly fictionalized story that George Frideric Handel's magnificent Water Music was originally intended as a peace offering to King George I. In 1710, the then Elector of Hanover had given the rather vagabond composer a generous position at his court; but Handel never actually fulfilled his duties. After the Elector relocated to London, the composer was more than a little reluctant to face his old master. As the story goes, it was not until 1717, when Handel seized the opportunity to provide some musical entertainment for the King's now-famous barge party on the River Thames, that the composer was restored in the royal eye; George I was completely enamored with the Water Music and all past transgressions were immediately forgotten. There was indeed a grand party on the Thames on July 17, 1717, during which some of Handel's music (possibly but not definitely the Water Music) was played.

It appears that Handel drew upon three already-composed suites of instrumental music when putting together the Water Music; the Water Music Suite No.3 in G major/minor, HWV 350, is, in terms of instrumentation, the most intimate of the three, calling for just flutes, strings, and basso continuo.

There are really only four movements in the Third Water Music Suite, but three of these are da capo organizations built around two individual pieces, and so one will sometimes see HWV 350 listed as comprising seven or eight separate items. Unlike the Second Suite, which begins with a robust and lengthy overture, or the First, which contains no fewer than three large-scale through-composed movements, the Water Music Suite No.3 is made up entirely of small dance and character pieces.

First up is a gentle, untitled piece in triple meter (sometimes called lento), in which a solo flute ? supported by the first violins ? sings a flexible melody atop a transparent background that, even at its most active, moves no faster than in quarter notes. Each of the piece's two halves is repeated.

In the following Aria the flutes are sometimes replaced by oboes, but this is most likely a modern enhancement and not Handel's idea. A rapid bourr?e style is at work in each of the two parts of this da capo organization, and each is itself cast in simple binary form. Handel provides some delightful harmonic contrast in the second part ? he moves to the parallel minor (G minor), but not directly at first, and even after establishing the new mode feels free to veer off towards B flat major and C minor for a bit ? but the reprise of the opening re-establishes good natured G major.

A Menuet and Trio in G minor is next (sometimes the minuet portion and its trio, which is not actually marked as such, are separated into individual movements). There is a wonderful line for piccolo flute, or, possibly recorder, in the trio section.

A pair of Country Dances ? titled such by tradition, not by Handel ? make a jovial conclusion.

Reviews of Water Music Suite No.3 in G