By: David Vaughan
For: Orchestra
This music is in your basket
View basket
Loading... 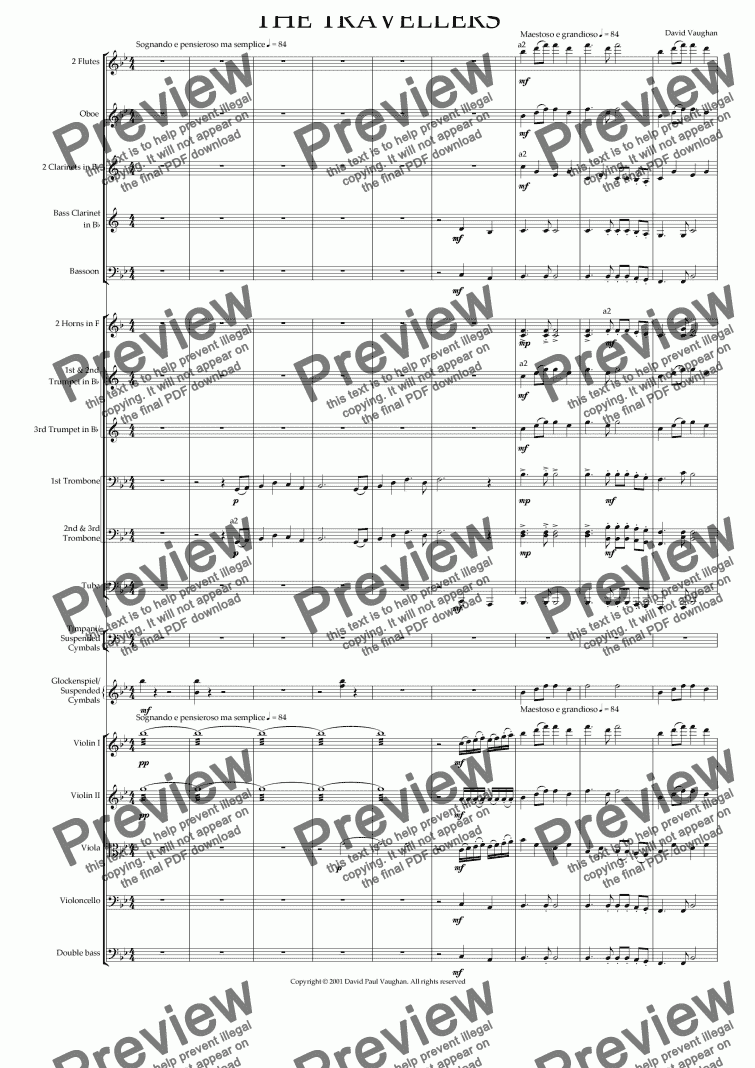 By: David Vaughan
For: Orchestra

Composer
David Vaughan
Year of composition
2001
Lyricist
none
Difficulty
Moderate (Grades 4-6)
Duration
9 minutes
Genre
Classical music and Modern classical music
License details
For anything not permitted by the above licence then you should contact the publisher first to obtain permission.

Excitement reigned as the golden bus rolled up the drive. To head off on adventure, it seemed, and all were feeling inspired.

And so the Travellers set off, their faces filled with joy. Yet on the horizon trouble was brewing, and with it came fearsome folly.

The Succubus, was known to some as She, had come and swept abroad, causing many near to flee. She was a most horrific sight, of horror unbridled be. Yet true enough she slinked her way, into her favourite seat.

Oblivious to all the horror, and up the back unseen, sat the sad and lonely Nicole. Though young and bright the mind of she, foolishness was her fall. As time and time again she went, they hurt her all the more.

The bus it travelled through the day, and as the light grew older, the young and saddened boy aggrieved, as the one he sought knew nolder.

And as the day grew to a close, the lights all dimmed, and dreams they took. Yet beyond the bound of tents and packs, the nightness woke its wanting.

The passionate night, so filled with glee, it bounced around the yorning, and so this way it kept about, until the hint of morning.

The sun it shone upon the bus, the tents and all the yorlings, and so at last it came the time, to set themselves a-homing.

Darkness, Derivations, Dreams of the Ethers, The Storm, III. The Cyclone, The Storm, II. The Ancient Forest, The Storm, I. Before the Storm, Brian, Wednesday, Monday, Man of Spiel, Modal Dances, II. Dorian, Modal Dances, I. Ionian, Marshland, Fires in the Rain, Children in the Field, The Theropod Walk, Tragic Love Suite, Dance for Apollo, Lullaby for Katie, Swingin’ Skies and Night of the Roaming Dead

Reviews of The Travellers