By: anon.
For: Trio of Trumpets in Bb
This music is in your basket
View basket
Loading... 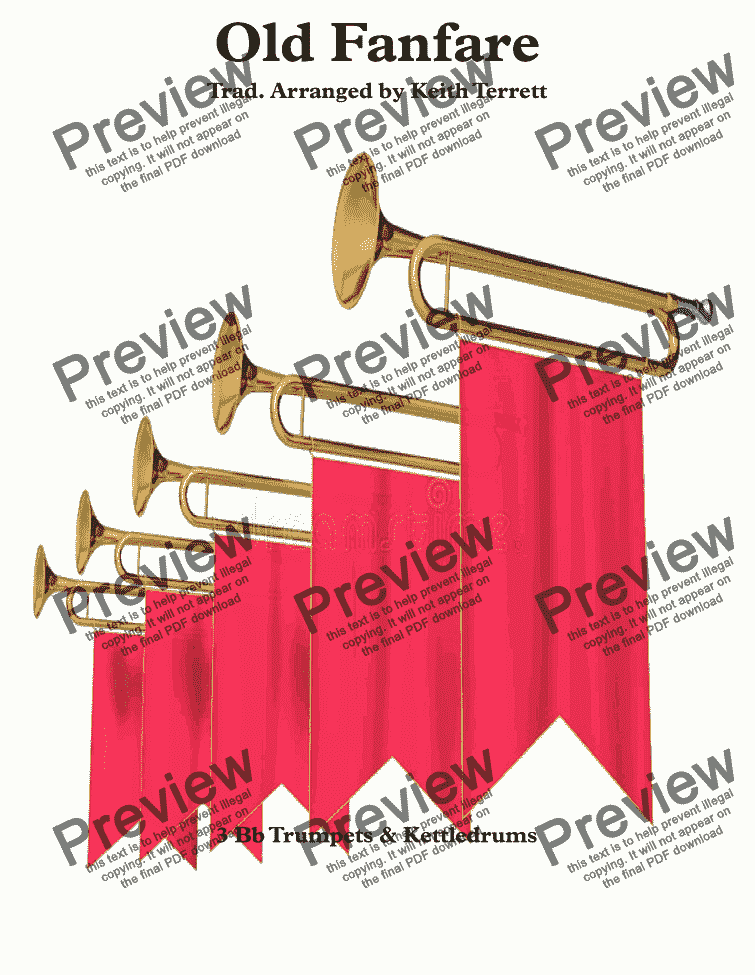 By: anon.
For: Trio of Trumpets in Bb

Composer
anon.
Arranger
Keith Terrett
Publisher
Music for all Occasions
Difficulty
Moderate (Grades 4-6)
Duration
1 minute
Genre
World music
License details
For anything not permitted by the above licence then you should contact the publisher first to obtain permission.

This was arranged from an old melody of unknown origin, for Eb Cavalry Trumpets and Kettledrums of the Queen’s Royal Irish Hussars Band, a former Northern Irish Regiment within the British Army; whose Colonel in Chief was HRH The Duke of Edinburgh. Winston Churchill was a young officer in the regiment, before the amalgamation of the 4th & 8th Hussars, to form the ’Queen’s Royal Irish Hussars’’.

All cavalry regiments of the line, have a team of Cavalry Trumpets, who under the ’Trumpet Major’, play at 11am each day outside regimental headquarters, for the Regiment. Traditionally the fanfare ’stables’ would be played first; followed by another fanfare of the ’’Trumpet Major’s’’ choice. In cavalry regiments there is often a drum horse, on which the two timpani are positioned and played. An example would be the Queen’s Own Hussars, who for many years had a fine old drum horse, trained not to panic when the kettledrums were being played fortissimo! During the day, one trumpeter is on duty, and plays various trumpet calls throughout the day to signal important happenings in the regiment’s daily schedule of events. For example, Reveille is at 0630, Mess call at 0700, Mess call 1230, Guard mount 1800, Officers dress for dinner 2000, finishing with last post at 2200! There are also trumpet calls for fire, war and mucking out the horses!

One morning when I was on trumpet duty in Germany at the tender age of 18, I woke up late, and just managed to play the ’’Reveille’’ trumpet call out of my bedroom window, in an effort not to be ’charged’ for missing a call! The equivalent in the Infantry would be the bugle, which is also used as a method of signaling to the regiment.

This fanfare works well for three Bb trumpets and timpani. Eb cavalry trumpets are often written in the key of C, and harmonically there is no third on chord V due to the harmonics of the instrument, and the fact that they have no valves; giving a bare sounding chord. The trills in the first part are lip trills, on Bb trumpet, simply play a lip trill using the valves 1 & 3. The most famous Eb cavalry trumpeters in the British Army, are undoubtedly the trumpeters of the household cavalry, who perform in spectacular golden uniforms, complete with riding hats, at the state opening of parliament. Don’t forget Eb cavalry trumpeters are musicians from the band,(they could be clarinettists),assigned to trumpet for two to three years, not so good for your embouchure!! So when you hear a mis-pitched note in future, you know that the trumpeter could be a bassoonist, doing his or her very best.

Reviews of Old Fanfare for three Bb Trumpets and Kettledrums