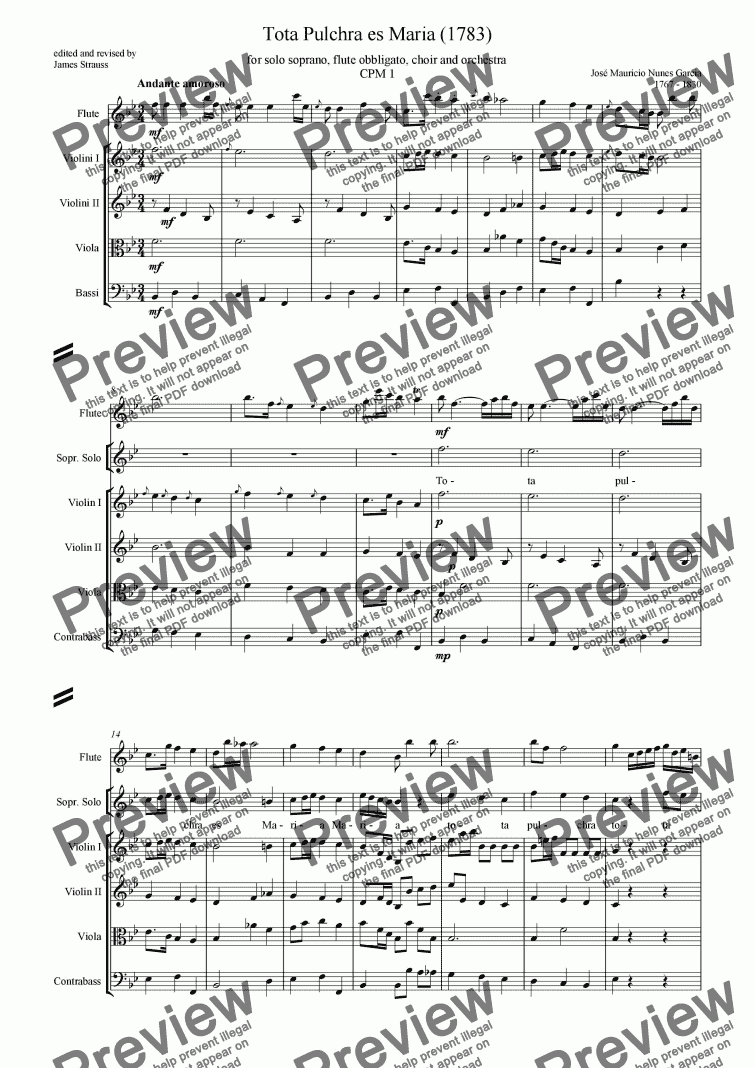 Jos? Mauricio Nu?es-Garcia was born in Rio de Janeiro, the son of a black Brazilian woman. He was a founder of the Brotherhood of St. Cecilia and became a priest in 1792. He was widely acclaimed for his intellect, spirituality and musical artistry. In 1798 he was appointed Mestre de Capela of the Rio de Janeiro Cathedral where he served as organist, choirmaster, music instructor and composer-in-residence. In 1808 he attracted the attention of Jo?o IV, King of Portugal, who was so impressed by his talent and compositions that he appointed Nu?es-Garcia Mestre deCapelato his Brazilian royal chapel. An active composer all his life, Nu?es-Garcis produced masses, offertories, operas, symphonic overtures, popular songs and a method for the pianoforte. Nu?es-Garcia conducted the Brazilian premi?re of Mozart's Requiem in 1819. Tota Pulchra es Maria, Motet for Solo Soprano, Flute obbligatto , Chorus and Orchestra was his opus one, he was only 16 years old.The present edition its bases in 2 sources, one at Biblioteca Nacional do Rio de Janeiro, and another belonged by Sigismund Neukomm (1778-1858)

In order to submit this score to ScoreExchange.com James Strauss has declared that they own the copyright to this work in its entirety or that they have been granted permission from the copyright holder to use their work. If you believe that this score should be not available here because it infringes your or someone elses copyright, please report this score using the copyright abuse form.