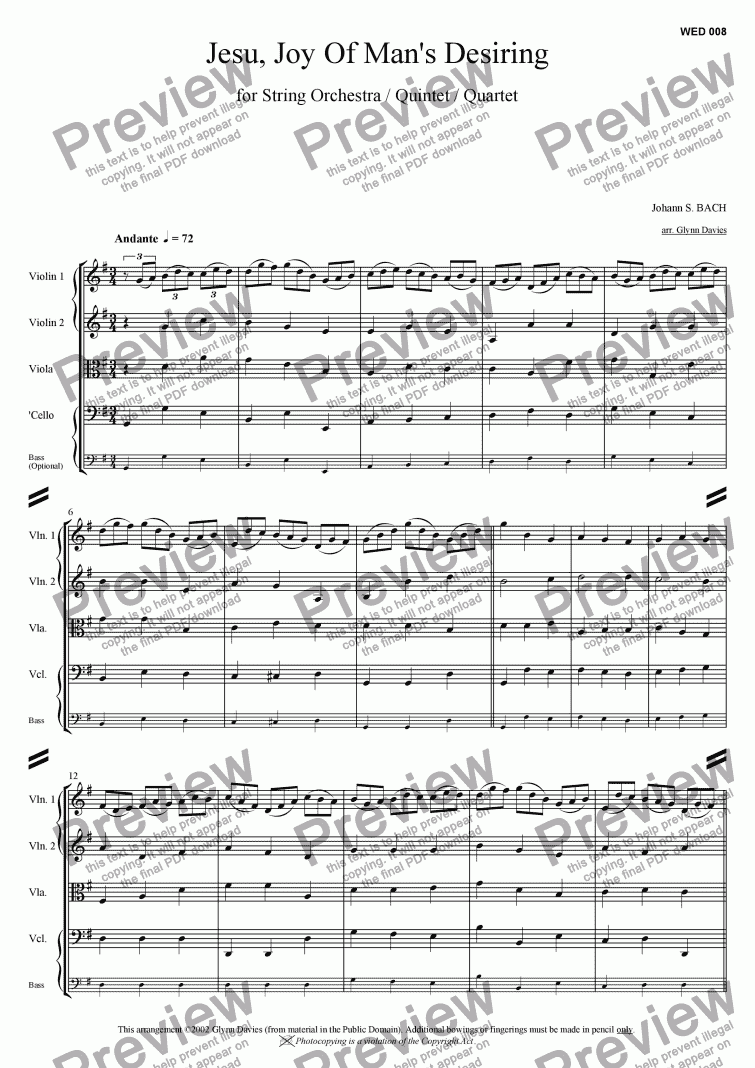 Composer
Johann S. Bach
Year of composition
1723
Arranger
Glynn Davies
Difficulty
Moderate (Grades 4-6)
Duration
2 minutes
Genre
Classical music
License details
For anything not permitted by the above licence then you should contact the publisher first to obtain permission.

Johann Sebastian Bach's sacred Cantata No.147 "Herz und Mund und Tat und Leben" (BWV 147) (Heart and Mouth, Deeds and Life), was written for the feast of the Visitation of the Virgin Mary and first performed in its final definitive form in Leipzig to mark the feast day, July 2, 1723. Much of the work originated during the composer's tenure as Konzertmeister in Weimar, where upon his appointment in 1714 he also assumed responsibility for the provision of a new cantata each month for services held in the Duke's chapel. In its earliest form (BWV 147a), this cantata was intended to be given on the fourth Sunday of Advent, 1716. This version contained four main arias and an opening chorus, but no recitative sections, three of which were added later, along with the great chorale, which brings each of the main sections to its close. The autograph of the Leipzig version survives intact, but all except the opening movement of the first version has perished. Interestingly, the composer's original design for the Advent feasts at Weimar would have been considered entirely unsuitable by the church authorities in Leipzig, who had forbidden the performance of all concert music during this period of the liturgical year. Bach managed to overcome this restriction by incorporating references to the "Magnificat" (Luke 1:39-56) into the score, thus tailoring the cantata specifically to the Feast of the Visitation.

The final version begins with an elaborate chorus in C major, in which the celebratory tone is established by the fanfare-like opening section for orchestra. The vocal parts are in fugal form, with the entries staggered from the upper register to the lowest in succession, and later this ordering is skillfully reversed when the bass voices are heard first of all at reprise. A tenor recitative accompanied by strings alone is followed by an alto aria in the key of B minor, in which the oboe d'amore has a prominent obbligato role. The major aria of Part I is given to the solo soprano. As Nicolas Anderson has written, "Bereite dir, Jesu, in D minor with violin obbligato constitutes a lyrically expressive high point in the work. There is a beguiling innocence about the vocal line, while that of the violin, predominately in triplets, provides an ecstatic accompaniment." Part I concludes with the famous chorale known in English as "Jesu, Joy of Man's Desiring."