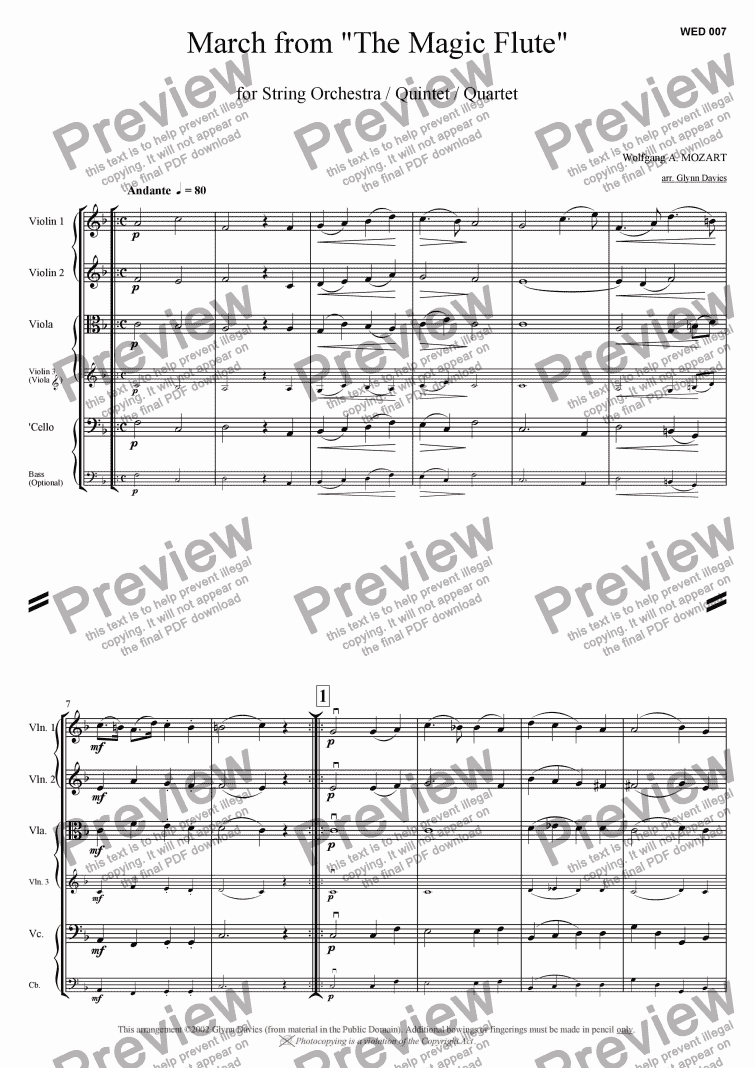 Composer
Wolfgang A. Mozart
Year of composition
1791
Arranger
Glynn Davies
Difficulty
Easy (Grades 1-3)
Duration
2 minutes
Genre
Classical music
License details
For anything not permitted by the above licence then you should contact the publisher first to obtain permission.

Despite its whimsical libretto and obviously emblematic characters, Mozart's singspiel The Magic Flute is regarded as one of the greatest operas of the entire repertoire. In fact, as music historian Philip Downs has noted, many hold that The Magic Flute is among the greatest human documents, worthy to stand beside Bach's St. Matthew's Passion. In this story about good and evil, Sarastro, the high priest of an enlightened brotherhood, abducts Pamina, whose mother is the evil Queen of the NIght. The Queen sends Prince Tamino to save Pamina. Tamino not only falls in love with Pamina, but also accepts Sarastro as the incarnation of truth and goodness. Tamino's counterpart is Papageno, the Queen's bird-catcher, whose earthiness counterbalances Tamino's idealism. Predictably, love and goodness triumph, Sarastro overcomes the Queen of the Night, Tamino and Pamina are united after many trials, and Papageno finds Papagena, a female version of himself. The possible sources of Emanuel Schikaneder's libretto include Jakob August Libeskind's story "Lulu or the Magic Flute," published in Wieland's Dschinnistan, a collection of fairy-tales.

The Magic Flute was written in 1791, the year of Mozart's death. Although overwhelmed by many adversities, Mozart found great joy in working on an opera for Schikaneder's Theater auf der Wieden, in the suburbs of Vienna, which catered to unsophisticated audiences. The Magic Flute has been called a Masonic opera: both librettist and composer were Masons, and the opera abounds with Masonic symbolism, culminating in the triumph over light over darkness. Although the Masonic flavor of The Magic Flute is undeniable, what makes it a great work of art is Mozart's unique ability to translate his humanistic ideals into music of extraordinary beauty and evocativeness. The fundamental theme of this opera is love, a theme to which Mozart fully dedicates his entire genius. To the listener, Mozart's ode to love brings eighteenth century opera in its full splendor. Not only is the music, which includes sparkling arias, charming buffo scenes, and ensembles of transcendent beauty, enchanting and invigorating, but it also effectively coalesces with the story to create a powerful, convincing work of art.

This arrangement comes with a supplemental 3rd violin part, as well as a bass part for use with string orchestra.

Reviews of The Magic Flute - March