Sign in / Register
HomeInstrumentationsString quartetSong Without Words No.30 - Spring Song Op.62 No.6 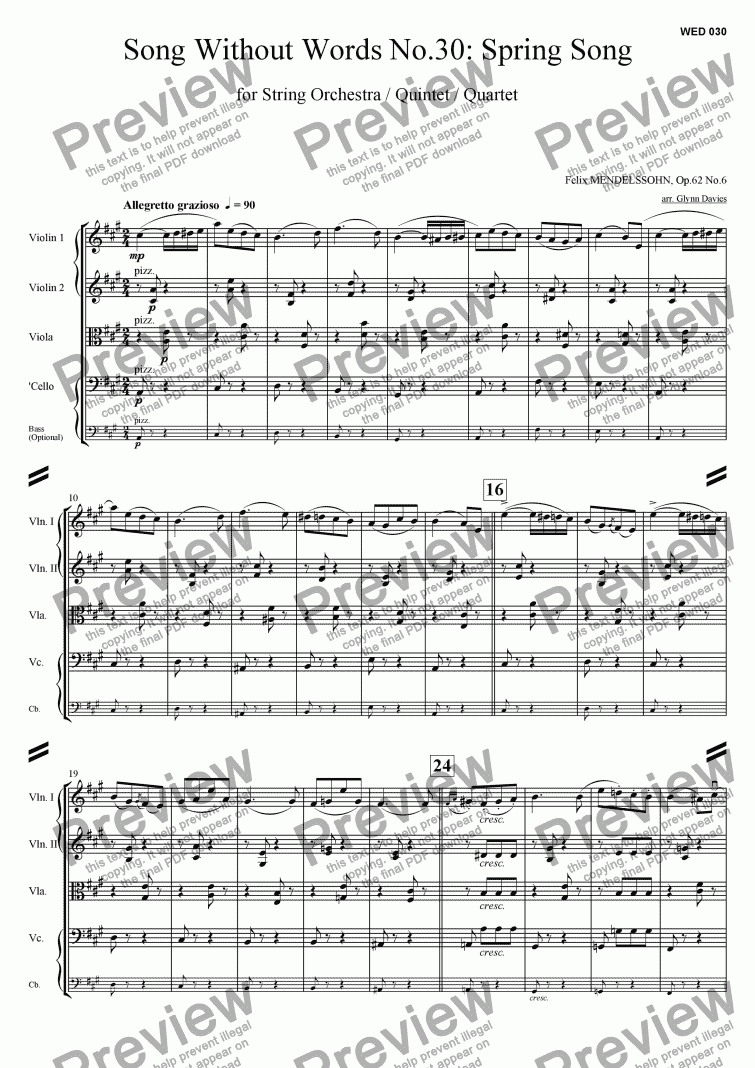 Composer
Felix Mendelssohn
Year of composition
1843
Arranger
Glynn Davies
Difficulty
Moderate (Grades 4-6)
Duration
2 minutes
Genre
Classical music
License details
For anything not permitted by the above licence then you should contact the publisher first to obtain permission.

Only five of Mendelssohn's 36 "Lieder ohne Worte" (Songs Without Words) received titles from the composer. Mendelssohn hesitated to attach a title to these piano miniatures because he found words " … so ambiguous, so vague, so easily misunderstood in comparison to genuine music, which fills the soul with a thousand things better than words." Unlike most of the Lieder ohne Worte, the title of Op.62, No.6, "Fr?hlingslied" (Spring Song), is directly attributable to Mendelssohn.

Mendelssohn's fifth volume of Lieder ohne Worte was published in 1844 in Bonn. The set was designated Op.62. The six pieces were composed over about a two-year period; only four can be dated with certainty. Four of the six are in major keys and there are a variety of song types, including examples of the solo Lied, duet and partsong.

No.6, in A major, maintains a solo Lied texture. The melody, with its rising and falling eighth-note line peppered with occasional sixteenth-note chromatic passages is perfectly suited to the voice throughout most of the piece. Constant arpeggio graces produce an accompaniment with a delicate, harp-like sound that continues from beginning to end. Aspects of instrumental composition permeate the work, especially in its formal structure. For example, a second section in a contrasting key with melodic material composed of elements from the first section reappears after the return of the first section, but transposed to A major. The predominant feature of the piece is a leaping, then descending figure of five eighth notes that recurs in the manner of a symphonic development.

This arrangement is for standard string quartet, and comes for an optional bass part for use with string orchestra.