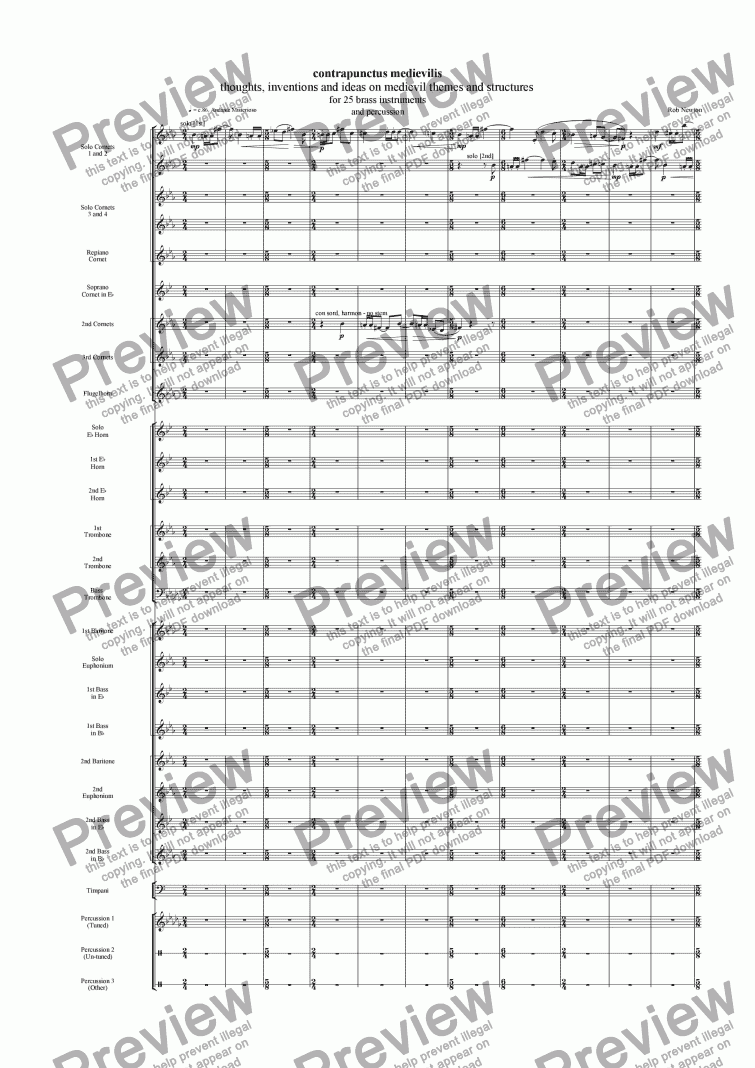 As the title suggests, this piece uses a great deal of inspiration from medieval music, its harmony and performance. The three excerpts of music used are two anonymous songs, Alle Psallite cum Luya and Luto Carens and the ?Kyrie? from Machaut?s Messe di Notre Dame. The seating plan which the band should follow illustrates, by separating homogenous instrument groups from each other, the use of the ?same instrument? ensemble within medieval music. There are three other themes which fall outside of the medieval period, as these are composed by me. These being the initial ?fanfare? motif of the piece, the second ?fanfare? motif which enters at letter ?A? on the flugelhorn and a slower section that?s harmony has been based upon the essence of medieval harmony. Up until letter ?E?, the cornets argue amongst themselves all stating the same point one after the other, echoing it between each other. The Soprano cornet and the Flugelhorn offer a differing idea but none of the other cornets follow. At letter ?E?, a lower brass quartet dispels the cornets with the ?Kyrie? from Messe di Notre Dame, which meanders into the ?medieval? passage of my own composing. Soon all these themes become entwined with each other and the argument continues, the lower brass sounding Machaut?s composition and the cornets and horns still chirping away with the fanfares. At ?K? the mood suddenly changes, the band strikes together as one ? despite the trombones trying again to disrupt proceedings. After a haphazard climax, Alle Psallite cum Luya erupts from the trombones against the vain attempts of the solo cornets, euphoniums and baritones to steal the spotlight. At ?O?, the band does strike as one, the Tam-Tam chiming as a huge bell of Notre Dame. Following on from this is the ?Fuga Grottesco? section. slowly re-adopting previous material again in counterpoint to one another, as this begins to build again more instrument groups intercept and challenge the main fugue themes until they get over ruled. Luto Carens chimes away below the cornets and the piece speeds towards the finale, Machaut?s Mass slowly evaporating into the ether.

In order to submit this score to ScoreExchange.com Rob Newton has declared that they own the copyright to this work in its entirety or that they have been granted permission from the copyright holder to use their work. If you believe that this score should be not available here because it infringes your or someone elses copyright, please report this score using the copyright abuse form.