By: trad.
For: Solo Soprano + piano
This music is in your basket
View basket
Loading... 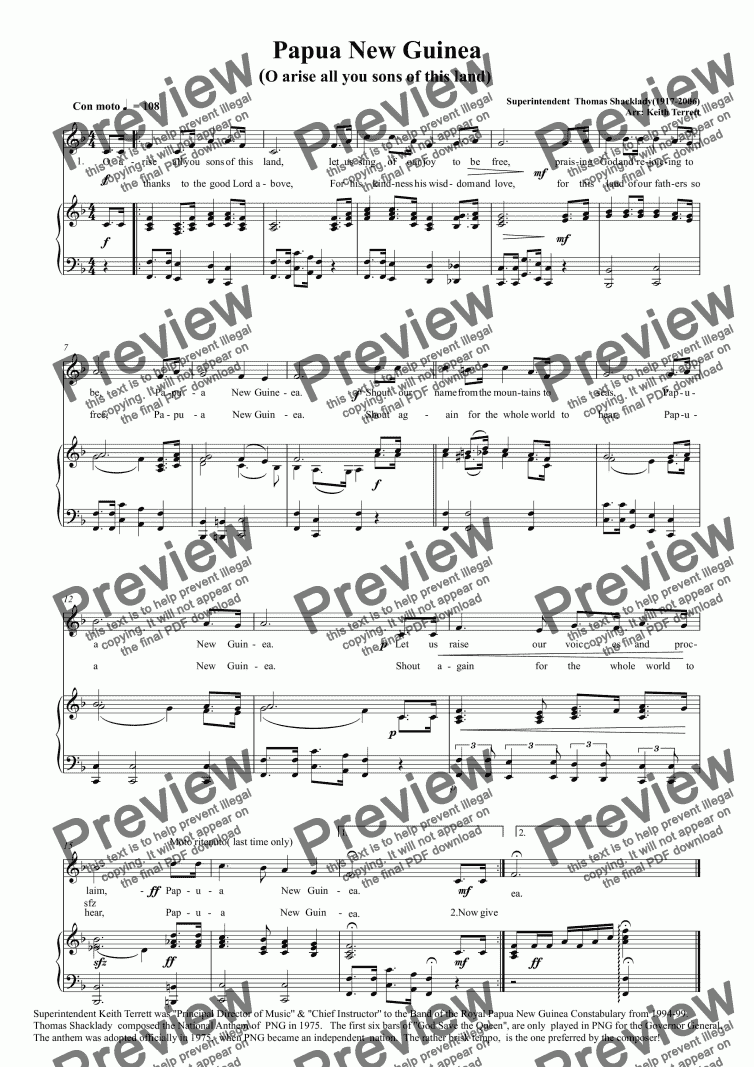 By: trad.
For: Solo Soprano + piano

Composer
trad.
Arranger
Keith Terrett
Publisher
Music for all Occasions
Difficulty
Easy (Grades 1-3)
Duration
1 minute
Genre
Classical music
License details
For anything not permitted by the above licence then you should contact the publisher first to obtain permission.

The one and only official version for Piano and Voice of PNG’s National Anthem ’O arise all you sons of this land’’, originally composed by a former Director of Music of the ’’Royal Papua New Guinea Constabulary’’, Superintendent Thomas Shacklady, BEM.

As Principl Director of Music & Chief Instructor myself of the Royal Papua New Guinea Constabulary Band from 1994-99, I performed this National Anthem many times, at official occasions; using my own arrangement sanctioned by Tom Shacklady for Military Band.

’’God Save the Queen’’ is only ever performed in PNG for the Governor General who is currently Sir Paulias Matane, as the Queen’s representative in the land of the un-expected!

As Governor General, he is entitled to the first six bars of the British N.A. only!

Thomas Shacklady won the Australian lotto in the 70’s, and retired to Brisbane, and was living in a nursing home due to poor health in Sydney, near his son. Tom died in 2006.

He was relieved in 1980, by Superintendent William Harrison MBE, another Royal Marine, who now lives in Boston, Lincs.

There are two verses(lyrics) to the PNG N.A., which you will be able to see below the vocal line on the piano score.

Additionally a new version for military band,wind, brass, saxophone, recorder and string quartet will soon be completed and posted.

This version of the PNG NA, is now published in the World Anthem Book.

This version has been made with the permission of the composer Thomas Shacklady and his son Neil L.Shacklady.

The current position of Director of Music of the Royal Papua New Guinea Constabulary Band is held by Chief Inspector Pala Walo, MBE, a PNG citizen who comes from Hula Village in the Central Province of PNG.

C.I. Pala Walo, MBE, trained in Deal at the Royal Marines School of Music, and is the first PNG citizen to hold the post of Director of Music.

For those of you interested in national anthems of the world, I would like to recommend the excellent U.S. Navy webpage, which lists all anthems, and has an excellent band recording of each.

The best world anthem book on the market is available from:

It is edited by Michael Jamieson Bristow FRGS, and is in my humble opinion the finest book available on this subject.