By: Mozart
For: Brass quintet
This music is in your basket
View basket
Loading... 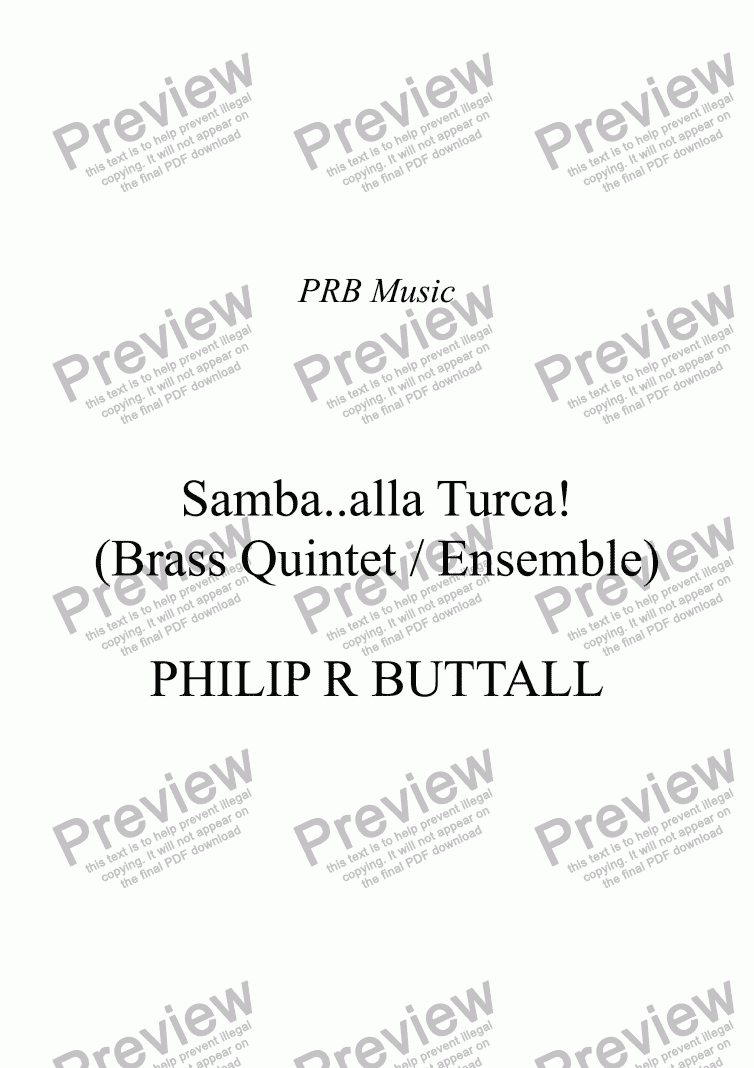 By: Mozart
For: Brass quintet

Grieg made an arrangement of Mozart’s Sonata in C, K545, by adding a separate piano part to Mozart’s original, thereby presenting the classical score in a more romantic setting.
My version of Mozart’s Samba..alla Turca! has proved quite popular, in both its original piano duet version, and in a number of different arrangements.

This present version for Brass Quintet was originally suggested by Robert Hofer (of the Austrian Brass Quintet who made a draft arrangement. I have refined and fleshed this out at a few points, to arrive at what is, hopefully another piece of fun, and which good Brass Outfits could include in their repertoire. I am delighted that Robert has emailed me to say: I like the new alteration in the first trumpet instead of the original line at the end and the coda part. You did a great job there!
And, as I’ve always said, to those who think this is an afront to the great Austrian master, there’s always the untouched original version out there!

And now, in response, firstly to an email from Liverpool University graduate, Dan Elson, I have added a few extra parts which might make the arrangement of interest to slightly larger ensembles, or even smaller brass bands. Dan writes: If you do this, I imagine a lot of smaller bands, or small groups from bands, would be interested in using it. Dan has suggested the following adaptations:

But things haven’t stopped here, as, some while back I had another contact, this time from Bilkent in Turkey, from Peter Koerner, trombonist and co-principal in the Bilkent Symphony Orchestra (BSO), who wanted me to provide transpositions for a few more ’exotic’ brass instruments, which I was happy to do!

I heard again from Peter again a few days ago, to ask for an arrangement of the original French Horn part now for Bass Trumpet in C, so that he he could use this in a concert in March 2016. He also attached an mp3 of his group playing their own special ’humorous’ version of my original arrangement, which not only shows them having some fun, but also confirms what fine players they are, individually.

Playing along with Peter are: Julian and Renato Lupu (Trumpet) - father and son from Romania - Peter, and Cem Gungor, Turkish Principal BSO Trombonist, and Noriyoshi Muraki, (Tuba) from Japan, and also a member of the BSO. Peter is also a Thein Brass Instruments Artist.

I suspect they’d drunk a little too much Raki when they started, before eventually setting out on my original version!?! Perhaps we do need a translation from the Turkish!!