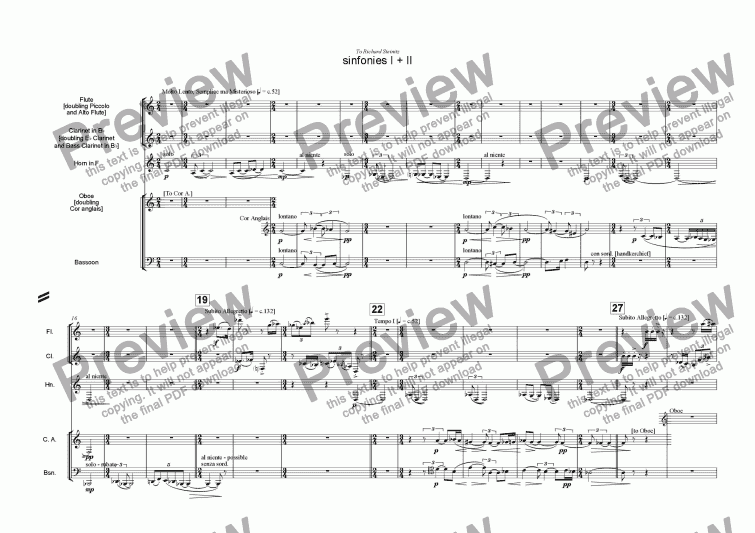 To an extent, the title of this piece is plagiarised. My inspiration for the title came from the piece, Symphonies of Wind Instruments by Igor Stravinsky, in which Stravinsky portrays several ideas in quick succession with each theme being it�s own �symphony�. This is a characteristic demonstrated in my piece also. The first two movements both introduce and develop two contrasting ideas and the third (epilogue) could be seen as a �pot pourri� of all of the themes. The first movement uses a solo horn motif accompanied by the double reeds and against that, a spiky canon by inversion on the flute and clarinet. The second movement develops a quasi-baroque theme against a more flowing melody in triple time whilst also making quotes to the previous movement. The epilogue presents no new material yet employs what has already been heard against an offstage oboe and an offstage Eb clarinet. The piece ends with no true conclusion, just a chaotic mesh of previous motifs, a strident note from the horn and then silence …

Regarding Seating �����������-������������������������� The seating plan for the work is slightly unusual. This is to (hopefully) convey a visual element to the basic idea behind the music. The clarinet and flute should be sat a short (but noticeable) distance from the Horn and the oboe and bassoon likewise. This is due to the development of the material, much of it is introduced by one �group� and developed by the other. It could be likened to an argument between children, one child attempts to make a serious point only for the other to make some silly retort. Of course, a certain degree of acting could be used in performance to emphasise this point but I have not written anything on the parts. This is because I see myself as more of a composer than a theatrical director

In order to submit this score to ScoreExchange.com Rob Newton has declared that they own the copyright to this work in its entirety or that they have been granted permission from the copyright holder to use their work. If you believe that this score should be not available here because it infringes your or someone elses copyright, please report this score using the copyright abuse form.

Reviews of Sinfonies I + II