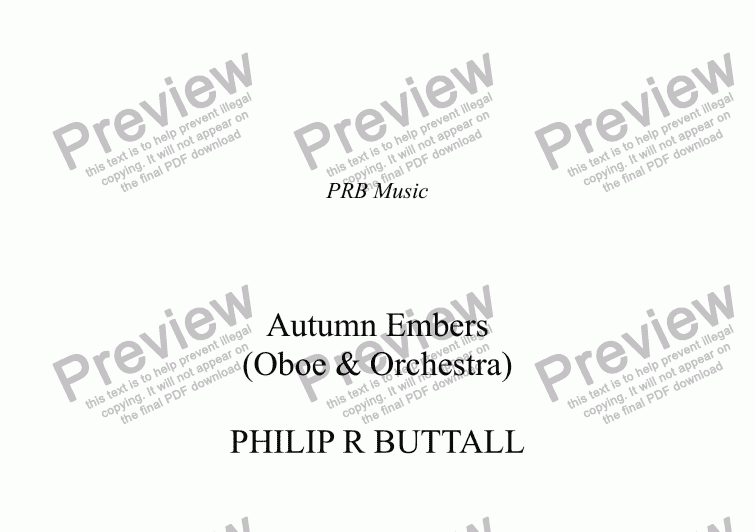 Composer
Philip R Buttall
Year of composition
2005
Publisher
PRB Music
Difficulty
Difficult (Grades 7+)
Duration
3 minutes
Genre
Modern classical music
License details
For anything not permitted by the above licence then you should contact the publisher first to obtain permission.

This was originally titled A Simple Andante, and written for solo guitar. It is dedicated to guitarist,Alison Smith, who premiered the work at her recital in Plymouth in April, 2002. It does need, however, an excellent guitar technique, and as such cannot be described as 'simple'. On hearing her perform it so successfully, I feel that our idea to rename it Autumn Embers very much captured the nostalgic sentiments expressed.

I have already been asked to arrange it for piano solo, which I have done. This new orchestral version was commissioned by a local semi-pro orchestra in Plymouth, the Radio Light Orchestra, conducted by John Ware, former Principal Director of Music of the Royal Marines Band Service. It has just been recorded on their first CD, Light Fantastic!, which appeared in August 2005, and the track is attached as an MP3 file. John suggested that I might use solo oboe for the melody, which I have done, and I think local player and teacher, Teresa Maher, really does it justice, with her lovely, warmly expressive tone.
It received its first US performance on October 14, 2005, when it was one of two works by UK composers to feature in Symphony of Hope, an annual event organised, and conducted by fellow SibeliusMusic composer, Dee Braxton-Pellegrino, in Wintersville, North Carolina, in aid of the American Cancer Society.