Sign in / Register
HomeInstrumentationsSolo instrument + pianoSonata No. 4 for Horn and Piano

Sonata No. 4 for Horn and Piano

By: Mike Lyons
For: Solo Horn in F + piano
This music is in your basket
View basket
Loading... 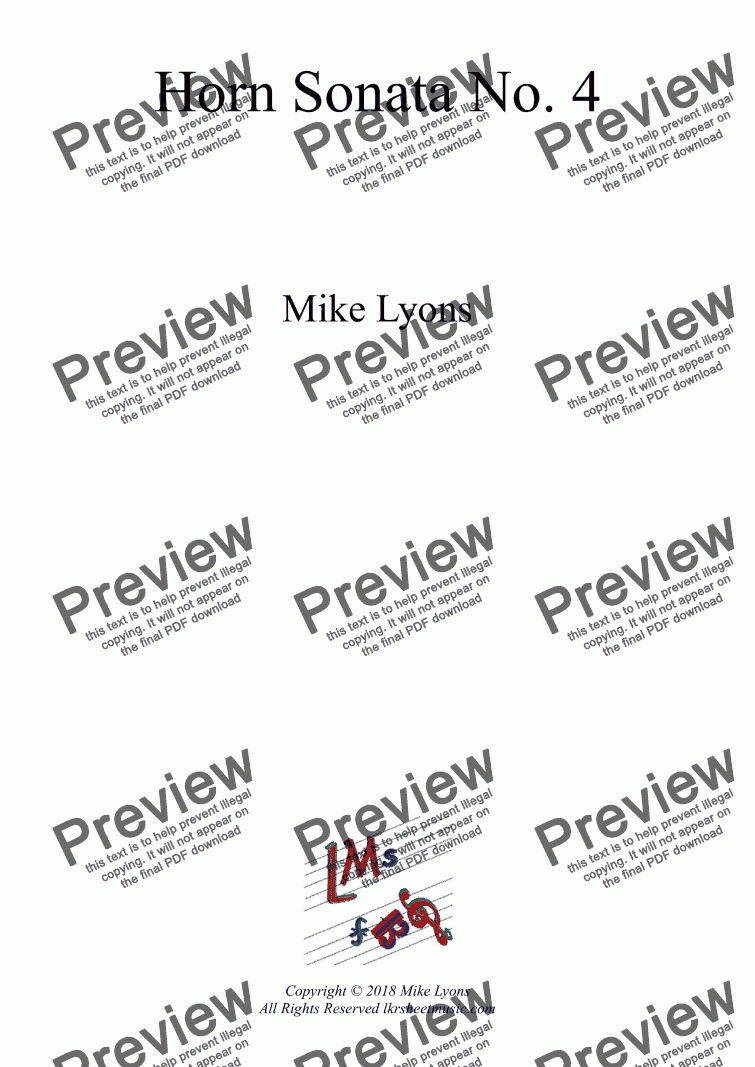 Sonata No. 4 for Horn and Piano

By: Mike Lyons
For: Solo Horn in F + piano
(+ VAT when applicable)
Note: The publisher requires a minimum purchase of 1 licenses
This music is in your basket
View basket

Composer
Mike Lyons
Year of composition
2018
Difficulty
Difficult (Grades 7+)
Duration
12 minutes
Genre
Modern classical music
License details
For anything not permitted by the above licence then you should contact the publisher first to obtain permission.

This is the full version of my horn sonata no. 4.

1st.Movement It is a lively piece after a slow introduction and requires good breath control and tonguing throughout.

The opening contains all the ideas and motifs that are important throughout the rest of the piece. These include, but are not exclusive to a 'hunting call' motif. glissandos, triplet figures and a marching bassline. Each motif or idea is clearly stated before being thrown into the mixing pot after the horn cadenza.

At just under 4 minutes this is not to long or too short to be used as a concert item on its own. The whole is a very satisfying tonal piece which would suit most medium to advanced players.

Rather than a slow movement, I decided to base it on a minuet and trio form. The main driver in the minuet is the quaver pattern that begins in the piano. This should be very rubato, much more so than in the mp3. Over this, the horn has a legato melody.

At the change to minor, (meno mosso a piacere) the change of tempo should be abrupt (no rall) and the whole section is very dramatic. The horn should be strident in the louder passages and super smooth in the quieter ones.

At the coda, the mood should be sultry, almost lazy. This is still 'a piacere'. The pianist needs to be really finely controlled in the diminuendo to the finish.

This movement is marked 'Presto' with the crotchet beat set at 120. It should not go faster than this.

In 12/8, it has something of the character of a jig, At first between the LH of the piano, with the RH joining in on the repeat. This happens again, in a slightly altered way later on. This opening idea is treated almost as a ritornello. It appears in the piano alone on its next iteration, leading into a syncopated section in the minor.

This is followed by the ritornello and then another minor section using short glisses and dramatic chords. There is also need of fluttertongung in this section.

Finally, the ritornello idea returns in the dominant, taking the horn up into the top register. This section leads to the close with a downward gliss, which counterbalances the upward gliss at the end of the first movement.

This is a challeging but enjoyable addition to the horn repertoire.﻿

Reviews of Sonata No. 4 for Horn and Piano