By: Keith Marr
For: Choir
This music is in your basket
View basket
Loading... 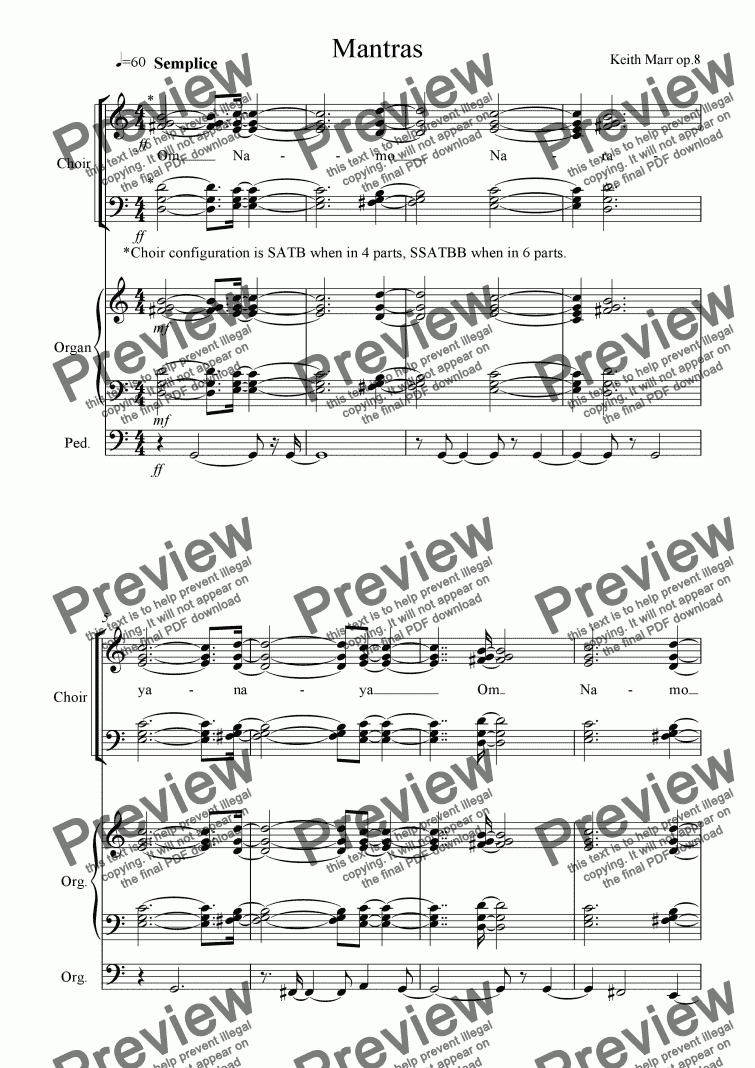 By: Keith Marr
For: Choir

Composer
Keith Marr
Year of composition
2002
Lyricist
anon.
Difficulty
Difficult (Grades 7+)
Duration
12 minutes
Genre
Modern classical music
License details
For anything not permitted by the above licence then you should contact the publisher first to obtain permission.

Using ancient Sanskrit mantras that exist for the purposes of yogic meditation, the top line sways through the same four note scheme over the full 12 minutes. The choral layout varies from three-part (SSA), four-part (SATB) to six part (SSATBB), with a brief 7 part section (SSAATBB).

The Mantras explained, listed in order of frequency of use:

Om Namo Narayanaya (Om Na-Mo Naa-Raa-Ya-Na-Ya) Associated with Vishnu, representing the preserving energy that keeps the Universe in balance. A peace mantra of particular use when negative energies seem to be out of control.

Om Sri Durgayai Namah (Om Shree Dur-Ga-Yay Na-Mah) Durga is seen as God as Mother. She is the divine protector. In Her arms She holds all the powers of the Universe. She rides a lion, symbolising the forces of nature.

Om Gam Ganapataye Namah (Om Gam Ga-Na-Pa-Ta-Yay) Ganapathi is another name for Ganesha the elephant-headed deity who is revered as the remover of obstacles and bestower of success.

Om Namo Bhagavate Vasudevaya (Om Na-Mo Ba-Ga-Va-Tay Va-Soo-De-Va-Ya) Krishna is seen as the supreme world teacher, as he is the giver of the Bhagavad Gita, one of the great texts.

Soham (So-Ham) Roughly translates as "I am that I am", meaning that no limitations can be put on the divine. The natural sound of the breath being exhaled and inhaled.

Sorry, there's no reviews of this score yet. Please .
In order to submit this score to ScoreExchange.com Keith Marr has declared that they own the copyright to this work in its entirety or that they have been granted permission from the copyright holder to use their work. If you believe that this score should be not available here because it infringes your or someone elses copyright, please report this score using the copyright abuse form.