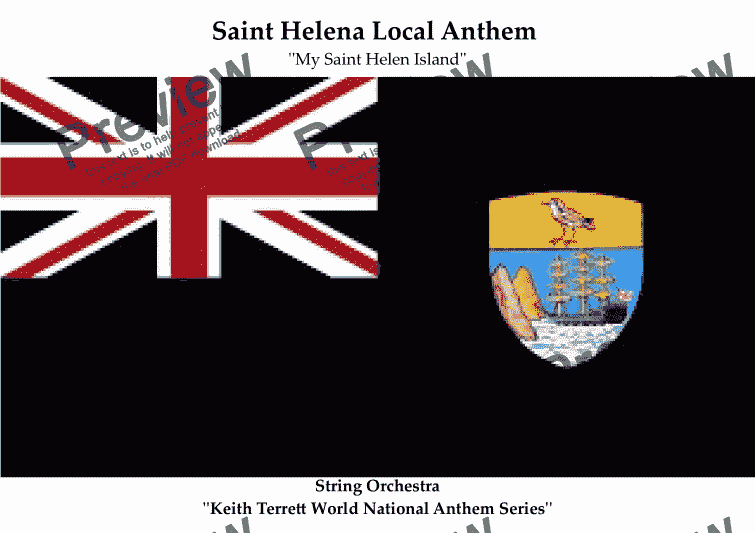 Arranged for String Orchestra, My Saint Helena Island is the unofficial territorial anthem of Saint Helena. It was written by Dave Mitchell in 1975, after persuasion from the inhabitants of Saint Helena. As British Overseas Territory the official anthem is God Save the Queen.

Dave Mitchell, nicknamed “Old Saddlebags”, was a Country & Western Disc jockey on AFN Volcano Radio on Ascension Island. Dave was introduced to Saints on Ascension by one of his best friends, Charlie Renn, and became involved with them, playing for parties all over the island. It was Charlie who suggested that Dave write a song for St. Helena. Dave was reluctant to do so, as he had never been to St Helena so Charlie, who had visited the island, promptly brought Dave some large colour postcards of St. Helena. Sitting in his room for a night or two studying the postcards, Dave picked up his guitar and in a few minutes the song was written. It is, appropriately, a Country song.

The song was an immediate hit with the Saints on Ascension. With the help of recording company Camaro Records, Dave made two 45-rpm records (4 songs) in Memphis, Tennessee in 1975. Dave and Charlie had planned to make a trip to St. Helena to deliver the records and some photographs of himself in person but it proved not to be possible so he had to mail them instead. The reaction on St. Helena was as enthusiastic as that of the Saints on Ascension and “My St. Helena Island” quickly became the de facto National Song of St. Helena.

It is played regularly as a request on Saint FM Community Radio and also over the ship’s PA system every time the RMS St. Helena leaves port.

1: My heart is drifting southward / To my home down in the sea / It’s the isle of St. Helena / Where my loved ones wait for me / Long since I left it / But I’ll soon be going home / To my St. Helena island / And swear I’ll never roam

3: Diamonds they are pretty / So is your fancy cars / But St. Helena island / Is prettier by far / Someday if the Lord above / Comes out of heaven’s gate / I’m sure He’ll pick St. Helena / And use it as His place