Eternal Father Strong to Save (Naval Hymn) for String Orchestra

By: John Bacchus Dykes
For: String orchestra
This music is in your basket
View basket
Loading... 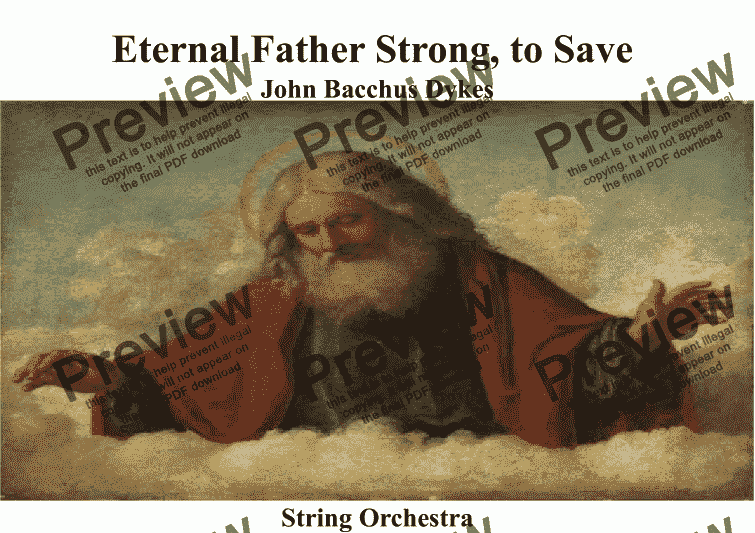 Eternal Father Strong to Save (Naval Hymn) for String Orchestra

Composer
John Bacchus Dykes
Arranger
Keith Terrett
Year of arrangement
2006
Publisher
Music for all Occasions
Difficulty
Moderate (Grades 4-6)
Duration
1 minute
Genre
Classical music
License details
For anything not permitted by the above licence then you should contact the publisher first to obtain permission.

A new harmonisation of this popular hymn which is very suitable and popular at funerals of Naval personnel, fishermen & seamen; arranged here for String Orchestra or Quartet.

The hymn was used in the film ’’The Perfect Storm’’, starring George Clooney.

This arrangement is also part of my ’’Popular’ hymns for String Orchestra , which gives even better value if you need more than one hymn, it comes with Morning has broken, Nearer my God to thee, and Schumann’s Von fremden landern und menschen, as an additional treat!

The dynamics are only my interpretation, please feel free to add your own!

If you play more than one verse, try a poco rallentando or ritenuto during the last verse only.

This hymn was among those sung at a religious service aboard HMS Prince of Wales attended by Winston Churchill (who requested that the hymn be sung) and Franklin D. Roosevelt at the conference creating the Atlantic Charter.

This hymn has been played or sung in a number of films and television programs dealing with the US Navy, including Crimson Tide and JAG. It has also been used in The Right Stuff (for Naval Aviation) and in The Perfect Storm (for civilians). In the show 24, the song was played as President David Palmer’s casket was loaded onto an airplane bound for Arlington National Cemetery. Tennessee Ernie Ford performed the hymn on a special episode of his television program filmed on a U.S. Naval carrier to commemorate the fiftieth anniversary of U.S. naval aviation.

It was sung at the end of every episode of Navy Log by the US Naval Academy Choir.

In Making Waves, it was sung by the crew of the Royal Navy ship HMS Suffolk at the Funeral of Andy Fellows.

The third verse of the hymn was used briefly in an episode of "Mr. Bean", when the titular character attends a church mass; it is sung as he enters but ends before he gets a chance to join in.

Its usage in the movie Titanic is an anachronism. The version sung in the movie is the 1940 Protestant Episcopal version, which was not yet written when the Titanic sank in 1912. However, the film is essentially accurate in that the ship’s passengers did sing the song - albeit in its original version - during the hymn service of Reverend Ernest Courtenay Carter.

This song is referenced in David Weber’s "Flag in Exile" as part of a religious service aboard a Royal Manticore Navy superdreadnought.

It is quoted in the opening scenes of Terry Pratchett’s Nation.

The hymn forms part of the soundtrack to Crimson Tide, composed by Hans Zimmer, notably the track "Little Ducks". A voices and orchestra arrangement of the hymn, the track is credited to Zimmer.