Sign in / Register
HomeInstrumentationsClarinet choirChristmas on The Downs (Clarinet Choir)

Christmas on The Downs (Clarinet Choir)

By: Traditional arranged Alun Cook
For: Clarinet choir
This music is in your basket
View basket
Loading... 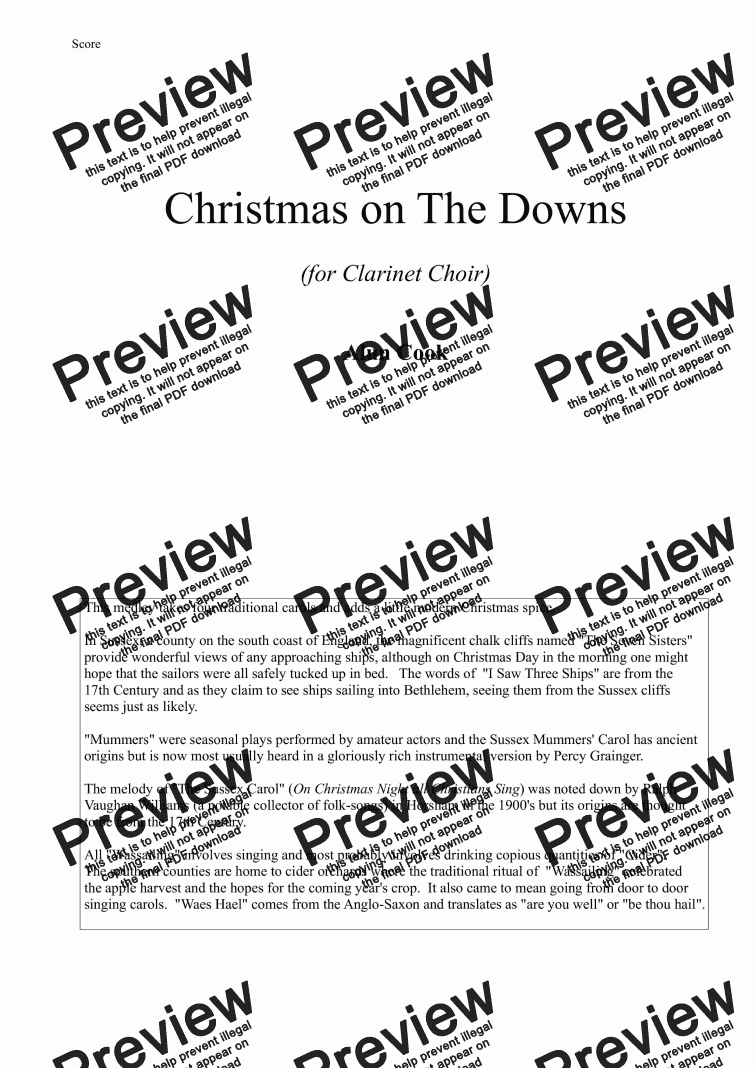 Christmas on The Downs (Clarinet Choir)

(Scored for a minimum of 7 Bbs and 2 Bass Clarinets. Full scoring is for 1 Eb, 5 Bb, 1 Alto, 2 Basses, 1 Contra Alto and 1 Contra Bass. The Eb and Alto parts are covered by alternative Bb parts, and the Contras are optional)

In Sussex, a county on the south coast of England, the magnificent chalk cliffs named "The Seven Sisters" provide wonderful views of any approaching ships, although on Christmas Day in the morning one might hope that the sailors were all safely tucked up in bed. The words of "I Saw Three Ships" are from the 17th Century and as they claim to see ships sailing into Bethlehem, seeing them from the Sussex cliffs seems just as likely.

"Mummers" were seasonal plays performed by amateur actors and the Sussex Mummers' Carol has ancient origins but is now most usually heard in a gloriously rich instrumental version by Percy Grainger.

The melody of "The Sussex Carol" (On Christmas Night all Christians Sing) was noted down by Ralph Vaughan Williams (a notable collector of folk-songs) in Horsham in the 1900's but its origins are thought to be from the 17th Century.

All "Wassailing" involves singing and most probably involves drinking copious quantities of "Cider". The southern counties are home to cider orchards where the traditional ritual of "Wassailing" celebrated the apple harvest and the hopes for the coming year's crop. It also came to mean going from door to door singing carols. "Waes Hael" comes from the Anglo-Saxon and translates as "are you well" or "be thou hail".

Reviews of Christmas on The Downs (Clarinet Choir)

Sorry, there's no reviews of this score yet. Please .
In order to submit this score to ScoreExchange.com Alun Cook has declared that they own the copyright to this work in its entirety or that they have been granted permission from the copyright holder to use their work. If you believe that this score should be not available here because it infringes your or someone elses copyright, please report this score using the copyright abuse form.