By: ANTOINE REICHA arr PRB
For: Solo instrument (Piano)
This music is in your basket
View basket
Loading... 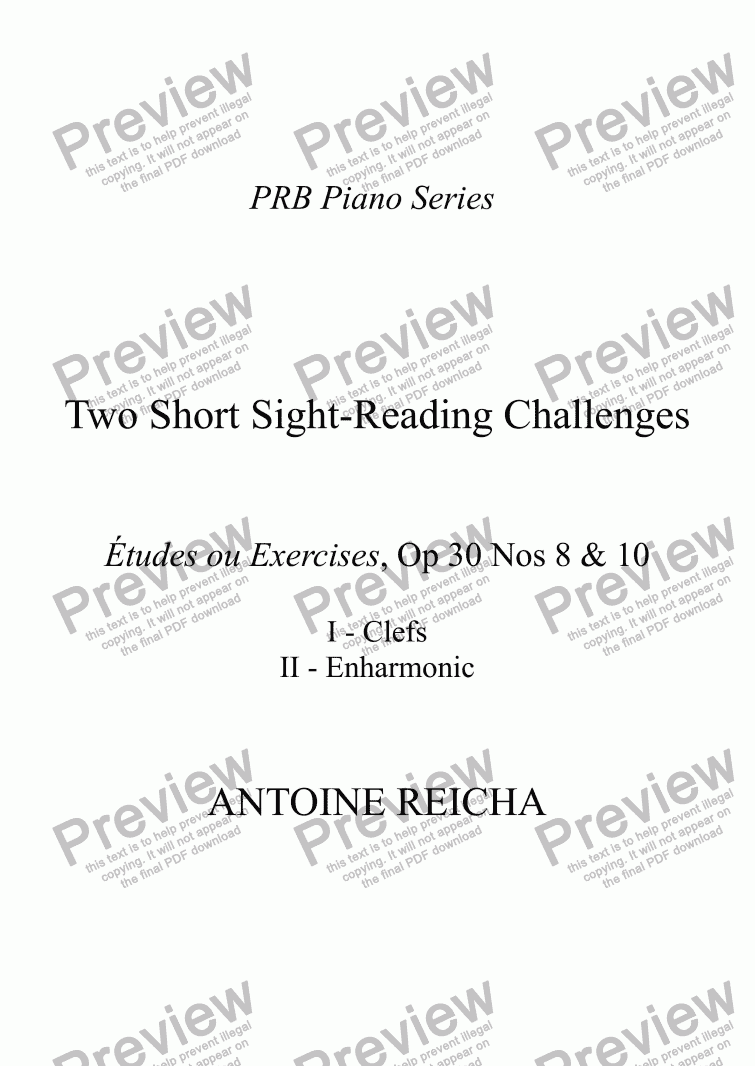 Composer
ANTOINE REICHA arr PRB
Year of composition
1800
Publisher
PRB Music
Difficulty
Difficult (Grades 7+)
Duration
7 minutes
Genre
Classical music
License details
For anything not permitted by the above licence then you should contact the publisher first to obtain permission.

For many years Antoine Reicha (1770-1836) has been best known as a composer of Wind Quintets.

However, his piano music is one of the best-kept secrets in music. He was an important influence on composers o fthe next generation, but, apart from an innovative set of fugues, his piano works have remained almost unknown since his own day. Encompassing Baroque practices as well as looking forward to the twentieth century, they are full of harmonic and other surprises that show the liveliest of musical minds at work. Reicha's twenty Etudes ou Exercices manage to combine his maverick inventiveness with a considerable degree of charm.

Wearing my reviewer's hat, I have already reviewed two CDs of his piano music on the excellent TOCCATA CLASSICS and CHANDOS labels respectively, for MusicWeb International, and there is plenty of his piano music left to discover and record.

While I was reviewing these twenty exercises, I came across two in particular, which were of particulat interest from the score-reading point of view.

In the first example, called 'Clefs', Reicha writes his left hand in the usual bass clef, but switches between the soprano, alto, tenor, and trebles clefs variously, to notate the right hand - which does make for challenging reading, even if the piece is technically very straightforward to play.

The second piece, called 'Enharmonic' is again a simple piece of writing, but while the key is G flat major, and in which key Reicha notates the right hand, he writes the left hand part in the enharmonic key of F sharp major!

I felt that these would make for interesting, and rather challenging sight-reading, so I have transcribed them here. In Reicha's original set, he kindly includes a version of 'Clefs', where the conventional treble clef is used throughout in the right hand, if you get too frustrated otherwise. As for 'Enharmonic', he talks a little about the need for grammatical correctness, but offers no further help. I have transcribed the piece, firstly in G flat major in both hands, and then similarly in F sharp major, as well as tidying up some of the extra complications with a double sharp or two along the way.

I have called the two pieces - somewhat sadistically - Two Short Sight-Reading Challenges! But I've also supplied 'the answer', if it all gets too much!