By: Rikard Nordraak
For: Brass quintet
This music is in your basket
View basket
Loading... 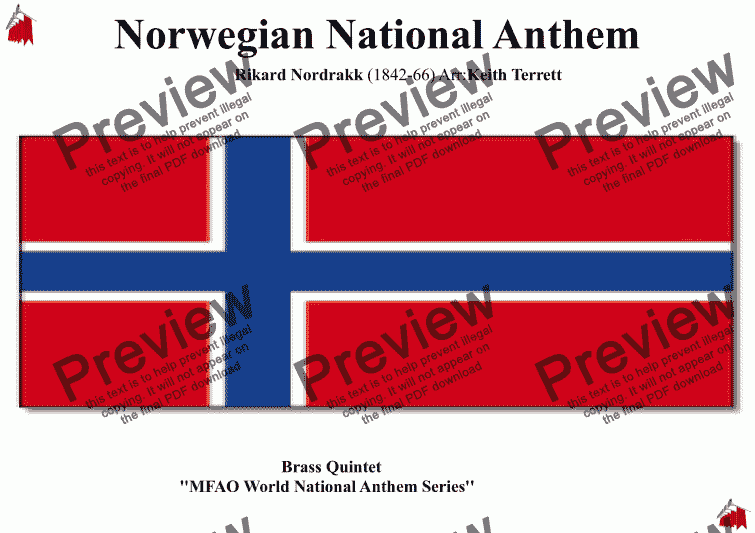 By: Rikard Nordraak
For: Brass quintet

Composer
Rikard Nordraak
Year of composition
1863
Arranger
Keith Terrett
Publisher
Music for all Occasions
Difficulty
Moderate (Grades 4-6)
Duration
1 minute
Genre
World music
License details
For anything not permitted by the above licence then you should contact the publisher first to obtain permission.

An arrangement of the Norwegian National Anthem for Brass Quintet.

The words for the national anthem, written by Bjørnstjerne Bjørnson, one of Norway’s great dramatists and poets, were first published in 1859. The original poem had six verses; in 1863 one of the original verses were deleted and three more were added, giving a total of eight verses; the deleted verse was a tribute to King Carl XV, but Bjørnson changed his political views later from monarchism to republicanism, and deleted that verse. Nowadays, the first verse and last two verses are most commonly sung.

The music was composed by Rikard Nordraak, cousin of Bjørnson and a friend of the famed Norwegian composer Edvard Grieg, in 1864. It was first performed later that year for the 50th anniversary of their constitution, and caught on quickly, overtaking “Sønner af Norges” in popularity. It became a part of the reading books in schools all over the country, and was sung by the children in the children’s parades organized by Bjørnson on every 17th of May.

For more of my original music, great arrangements and all the national anthems of the world, check out my on-line stores: http://www.scoreexchange.com/profiles/keith_terret http://musicforalloccasions.org.uk http://www.sheetmusicplus.com/search?Ntt=keith+terrett Need an anthem fast? They are ALL in my store! All my anthem arrangements are also available for Orchestra, Recorders, Saxophones, Wind, Brass and Flexible band. If you need an anthem urgently for an instrumentation not in my store, let me know via e-mail, and I will arrange it for you FOC if possible! keithterrett@gmail.com