By: Cedric Peachey
For: Percussion ensemble
This music is in your basket
View basket
Loading... 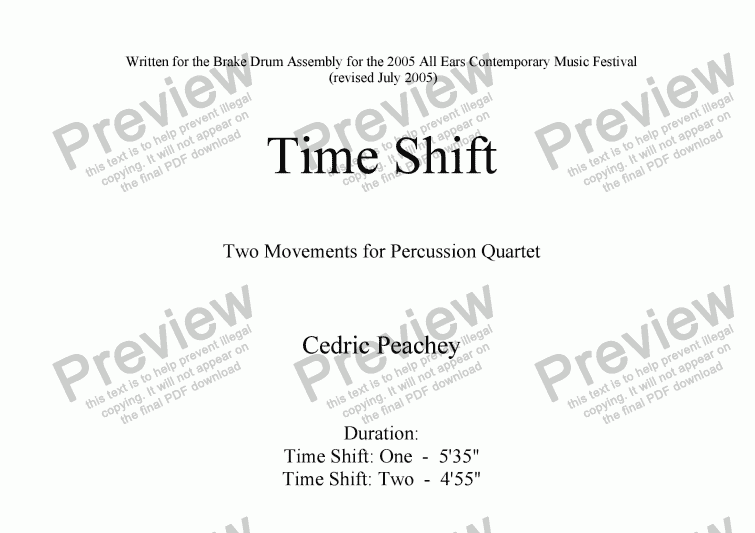 By: Cedric Peachey
For: Percussion ensemble

Composer
Cedric Peachey
Year of composition
2005
Lyricist
none
Difficulty
Difficult (Grades 7+)
Duration
11 minutes
Genre
Modern classical music
License details
For anything not permitted by the above licence then you should contact the publisher first to obtain permission.

Written for the Brake Drum Assembly, for their concert at the 2005 All Ears Contemporary Music Festival in London, this piece uses an instrumental line-up and layout that reflects the BDA's own recommended set up. Since publishing an initial version in June 2005, I have gone through the score in some detail with Chris Brannick of Ensemble Bash, one of Britain's leading professional percussion quartets. Chris highlighted a number of practical performing issues and his constructive advice on how these might be overcome has been a key factor in producing the revised score which I have now uploaded. My grateful thanks to Chris for his guidance and unstinting help.

In addition to working on the practical aspects of the score, I have revised and refined a significant amount of the original musical material - the end result is, in my view, a considerable improvement. If anyone is interested in a full set of parts, please email me.

The attached mp3 is taken from the BDA's performance last September where they played the first part of the piece - Time Shift One. The passages for an African balafon were played on a marimba but otherwise the performance follows the score. My thanks to Oli Mayne for his permission to upload the BDA's performance on this site.

For information on the BDA, its forthcoming performances and repertoire, please see: www.brakedrumassembly.co.uk/

Finally, in answer to a comment from one reviewer, I should point out that hanging ties are an established notational convention for percussion in place of 'laissez vibrer'.