By: Michael Drewes
For: String quartet
This music is in your basket
View basket
Loading... 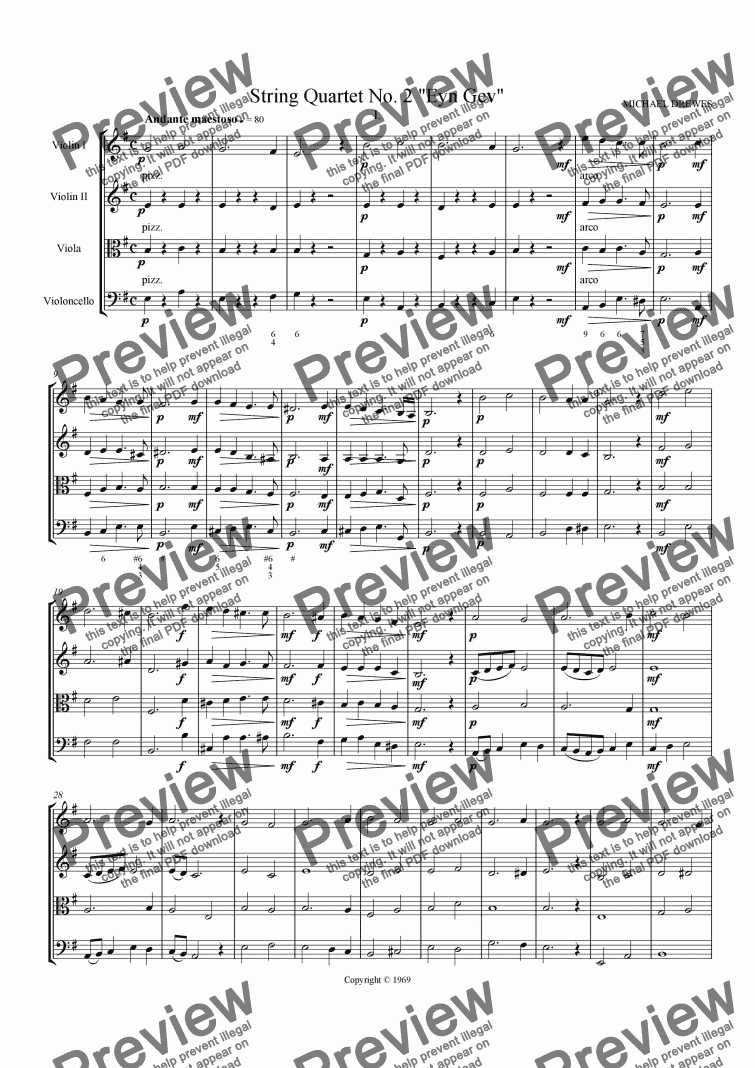 By: Michael Drewes
For: String quartet

Composer
Michael Drewes
Year of composition
1969
Difficulty
Difficult (Grades 7+)
Duration
21 minutes
Genre
Modern classical music
License details
For anything not permitted by the above licence then you should contact the publisher first to obtain permission.

Composed 1969. For the day of the wedding to my first wife, the Mexican composer Mario Kuri Aldana got four musicians from the orchestra of the National Autonomous University of Mexico, who then performed the first and second movement of it on July 18th, 1970. In 1972 it was performed complete in the home of Dipl.-Ing. Thomas Br�uer in M�lheim/Ruhr, Germany. I tried to offer it to music publishers, but with no success, except some (positive) criticism, according to which I worked it over again. One of the publishers to whom I sent the quartet, wrote back:

We generally find that the work is well crafted. Certainly, it is still possible to write nowadays music in the style of Stravinsky, but then it must be a really good masterwork in order to measure up with the production of that already concluded epoch.

Viewed as to harmony, the work exhausts itself only in cadence-like locutions; modulations do not appear, or if at all, they are willful and forced as in measures 116-132.

(Unfortunately, I do not remember any more the names of the persons and of the publishers of these letters which I must have received in 1972.)

At the wedding, Maestro Aldana also wrote into my handwritten viola and cello parts a piece of his, "Mar�a de Jes�s", which he then performed, too. In his honour, I include it at the end of my string quartet, as a separate piece under his name.

This string quartet was performed in the Jewish Museum of Florida in Miami Beach in a classical music concert by Florida Jewish composer Dr. Michael Drewes in honor of Florida Jewish History Month on Tuesday, 24 January 2006 by members of the New World Symphony of Miami, namely, as shown in the picture included:

Listen to the MP3 file of the first movement from the recording of this concert.