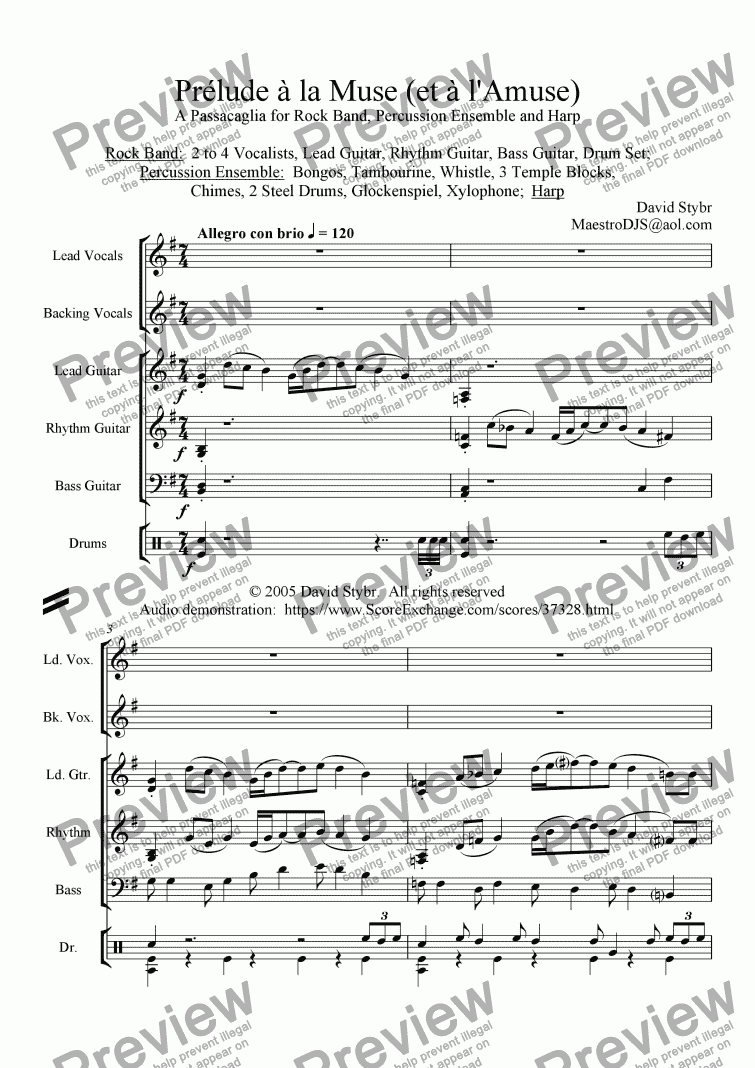 Commentary by Left Brain vs. Right Brain. LB: "Many pop songs are built on repeated melodic and rhythmic phrases, so I decided to cross a rock band with a passacaglia. After all, In-A-Gadda-Da-Vida is a passacaglia of sorts. A passacaglia is an old Italian or Spanish dance form based on bass patterns which repeat over and over while the melody above it is varied and developed, usually in 3/4 time, but I chose 7/4." RB: "The middle section in 7/8 and 7/4 is really exotic. A close friend introduced me to the extravagant circa-1960 music by the king of space-age orchestral pop: Juan Garc�a Esquivel! His visionary orchestrations are like an exploding musical pi�ata with strikingly futuristic arrangements. I didn't set out in this style, but the 'dooby-dooby-doo' voice synthesizer in my notation software was like the groovy 'zu-za-zu' vocal stylings of the Esquivel ensemble, so away I went." LB: "This piece was composed during an intense June 2005 heat wave in Chicago, Illinois. Naturally I also conducted some research into the exotic Esquivel sound." RB: "Tropical exotica emerged in the USA in the 1950s, when the soldiers and sailors from the Pacific theater of World War II came home and wanted some of the flavor of the South Pacific islands back at home. Tiki bars with umbrella-festooned rum drinks came into vogue, and pop orchestras specializing in the 'exotica sound' were popular. Bongos, pedal steel guitar, steel drums, bird noises, anything to evoke a tropical jungle setting were used. Exotica and Tiki bars probably peaked in the early to mid 1960s. They might be making a small comeback as a new generation discovers the sights and the sound. And hey, it's more than a sound – it's a lifestyle!"